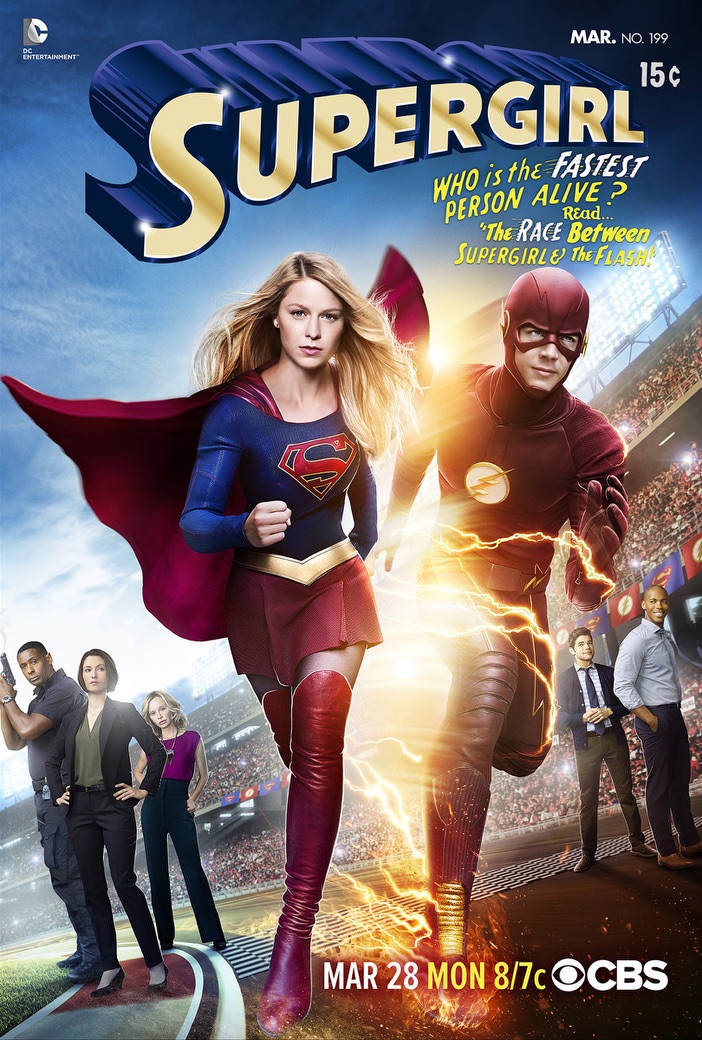 Rating - 5 (out of 5): The fix was in for this episode, as the chemistry that occurs is instant, but shouldn't be a surprise as the leads are familiar with each other from previous work (Glee). From the moment the Flash enters, Supergirl becomes an old-school house party, where everyone knows each other, the session is wicked, and above all, everybody is school. This is probably the first show where every character, albeit Alex and J'onn are mostly absent, performs well with what's given. We are given the flimsiest of excuses for the Flash's appearance, and an equally thin rationale for his return, but all that occurs in between, and yes, ectomorphic, contrived reasons to place them together, are gold standard for Supergirl, and that is good and much needed after last episode's spring-loaded, compacted nature. There was much speculation as whether or not the episode would happen, but this critic was never in doubt of it manifesting for the simple reason of why such team-ups are great entertainment. If you venture as far back as Superman (George Reeves) appearing on I Love Lucy, and I couldn't even imagine a modern day equivalent, it's the best of both worlds, two tastes that go great together, and more fun than should be allowed legally... well, maybe not the last part, fun of this sort should never be restricted.

Barry Allen's appearance demonstrates how small Supergirl's world is in comparison. There is no Star Labs, no Green Arrow, no Cisco Roman or Iris West, but also no Superman, Lois Lane, etc. So many fetters have been placed on Supergirl's flight, that it's surprising that the show soars as well as it does. Barry injects himself into the story's bloodstream, and what was already a bright show because somehow brighter. Barry's nerdy desire to pose for pictures, Kara enjoying a treat from an impromptu ice cream social, Cat Grant kicking Supergirl to the curb for the next best thing, as soon as the Flash arrives, everyone is in their story element, and the overarching plotline isn't sacrificed for ratings. When presented with the challenge of Livewire and Silver Banshee, our heroes fail in defeating them, but they don't in what matters most: protecting the people. Supergirl, in a move that should make a fan like myself irate, inasmuch as she's taken down by a bit of electricty, puts her body on the line to protect those in danger. In return, the people's faith in her is restored, and they move not only to protect her (yet another homage to classic Superman films) but they defeat the villains themselves (in an homage to the not quite as classic Amazing Spider-Man 2?).

When the Flash leaves, as Supergirl literally throws him home (baseball metaphor in there somewhere), the look on Kara's face is priceless. The look on my mine was terrible. I thought the fun was over, until she kissed Jimmy. I haven't liked Jimmy for Kara much. Earliy on there was a nice attraction, but he's made dumb move after move, in an effort to play "not to get". However, I warmed up to him again this episode, as he finally showed some genuine interest in Kara, even if she had to make him jealous to get him to be honest. The kiss was great, it was one you could vibe with, but I was stuck again with Jimmy's reaction. However, that was an early April Fool's prank on me, as Myriad had been put in play, so Jimmy wasn't a jerk, just under Kryptonian control... the wrong Kryptonian at that. Two more episodes to go and I am really looking for them. You've done well, Supergirl. Now, go the distance and finish strong.