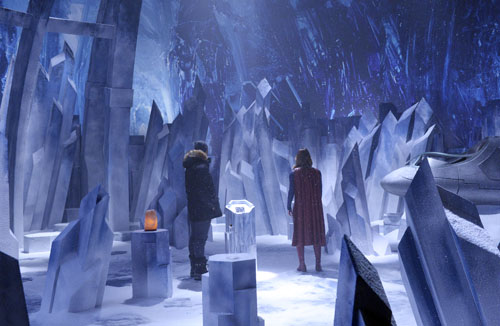 Rating - 3 (out of 5): It's the first show in a while that hasn't sat well with me. There are, as always, great things about the latestĘSupergirlĘepisode, but more now than before,ĘSupergirlĘseems to be legging along, even when firm movements of the plot occurs. The end of the installment leaves one wondering, "What exactly happened?" and "What's next?" Alex revealed her secret. Jimmy and Lucy are done. Winn saw some play-action. Superman is conveniently MIA. It's not that the actions are good story beats (with the exception of Superman), but will they be followed up with any weight greater than what's been shown? There is a reluctancy to pull-the-trigger with any and all of the better developmentĘon Supergirl. Kara makes inroads with Cat, and that's dashed with her 100 metre heat with Adam. Cat discovers Supergirl and Kara are one, and that's pushed back in the bottle, though all of the evidence remains. Kara espouses the Kryptonian mantra of "Stronger Together," and vacates the DEO, in addition to flat ignoring the one person on the planet that could help her the best. Again, it's not the premise, but the lack of commitment to them that's frustrating at this point. Still there's much to enjoy about "Solitude", so long as one doesn't look too closely about the edges.

Alex and Winn may be the first combination of Marty and Mary Sue that this reviewer can recall. If Alex isn't fighting J'onn toe-to-toe, beating Hellgrammites with no weapons, and cutting down Kryptonians, it's Winn who channels Chloe Sullivan with the tech prowess to defeat advanced aliens like Indigo, with a virus that he just happened to concoct accidentally years ago. It's no coincidence that they both were throttled in this viewing, a reminder of universal reaction to the trope gone too far. Alex's reveal of her killing Astra is well done, as it serves to deepen the connection not just between Alex and Kara, but J'onn as well, but there is the notion that Alex receives a softer touch, after Kara was quite terse with J'onn. Jimmy... here's a character with some problems. Handsome, affable, but the show's direction has brought him to the edge of being unlikable. If Jimmy's maintained feelings for Kara all along, then being with Lucy was never genuine, but a diversion to keep from dealing with his affections for Kara. That makes Lucy a placeholder for dramatic tension, which never plays well. However, and for obvious reasons,ĘSupergirlĘis hesitant on pulling the trigger on the romantic portions of the show, but if Winn can benefit from finally stepping up, Jimmy should follow suit.

Indigo makes a nice addition to the rogues gallery of no return, but the costuming and make-up for VandervoortŐs role was impressive... and she didn't remind me of Mystique as much I thought she would. The journey to the Fortress of Solitude was very well done, complete with Jor-El and Lara holding the planet Krypton in homage. Kara lifting the key was another homage as well. Superman conveniently being absent from Fortress was a low, groan moment. Where is this guy? Kryptonians abounding, nuclear missiles, dead family, nothing gets Superman to show up. When he says you're on your own, you're on your own. The offered reasons that Superman cannot appear, foremost among them that he has to be reserved for his bottom whipping in ŇBatman v Superman: Dawn of Bat-Justice," while understandable, donŐt make the silliness of it any better. There has to be a better way to address his absence without making him seem an uncaring, aloof relative with a cool time share. Still, when Supergirl saves the city from the nuke and J'onn lets out "Yes!", I was there with him. Rough edges and all, I'm forĘSupergirl, and if you're like me, you can't wait for the Worlds Finest match-up, but more on that next time.