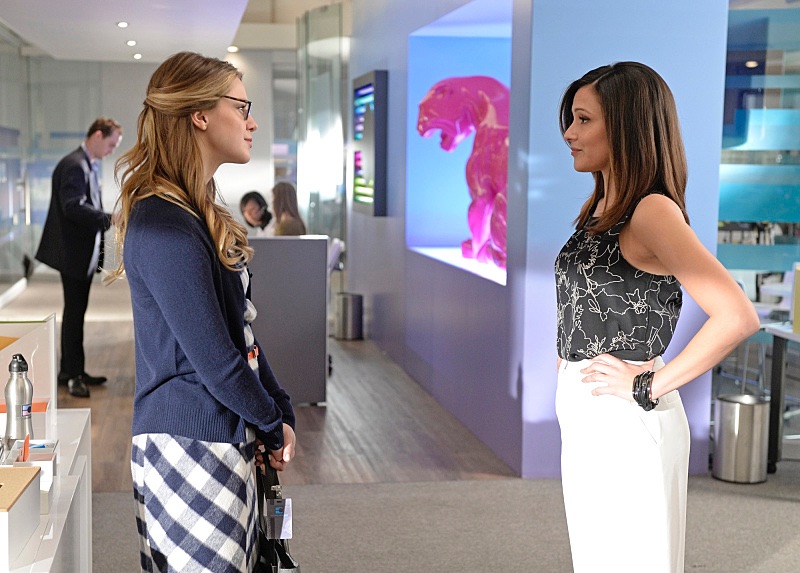 Rating - 4 (out of 5): While the theme of the episode is addressed to the viewer's attention, it's the supporting motifs that really make this a great episode. Astra being slain by Alex has added a palpable urgency to the show, that was both needed and wanted. Supergirl is past her initial order of episodes, and it's apparent by the turn of events, the darkening of her tone and the story's, that viewers are in store for Kara being challenged more and more internally, as well as physically. The immediate result is her relationship with J'onn, who takes her enmity on the chin like a champ. He's patient, allowing Kara to vent and vent some more, in a manner that is both fatherly and steward-like, as he's taking the brunt that Alex would receive. When Kara lets J'onn know that she can't manage her feelings and work with J'onn, it's a reminder what is at stake. Non will return in full force (and it must be said that Chris Vance does a fine job of controlled grief. Excellent show), and only by being "Stronger Together" will Supergirl and the DEO have any hope of defeating them. However, J'onn's action and Alex's silence threaten that union, and thus far it's been played well, without being soap operatic, which is quite surprising, as serials have a tendency to lend themselves to that trap, reflexively.

Jimmy's dialogue with Supergirl is balanced with his ridiculous request of Kara. On one hand, he reminds Supergirl of what she's supposed to stand for: Truth, Justice, and the American Way (though we still can't say American Way, it seems). Maxwell Lord poses a serious existential threat to Supergirl, one that might have been better exploited had he remained silent about it longer, but the idea of Lord revealing her identity is a credible reason to want him to remain incarcerated. Still, that threat poses a singular risk to Supergirl and not the public; keeping Lord locked away serves a selfish purpose, which Jimmy rightfully calls her on. Jimmy then dashes any ground he's made on the higher level, by putting Kara in a spot over his relationship with Lucy. Jimmy seems to believe that the problem lies with his shared secret, but the dilemma is solely and squarely on his shoulders, as he's made quite a mess for himself, by not being honest about his situation. It's obvious that Jimmy has feelings for Kara and vice versa, but Jimmy has used Lucy as a convenient buffer between himself and the truth. He doesn't have to reveal his relationship with Supergirl or Kara, but he does have to start being an adult about how he feels and take a page from Winn's book. He may have been shut down, but at least Winn was man enough to be honest. Man-up Jim!

Supergirl reminds me of many nascent shows that practice the same form in getting up to speed: throw everything at the wall and see what clings. Few shows have a solid direction, a firm purpose in what they're trying to achieve early on, the worst never get there, while the best have the learning curve of Superboy (Clark Kent). Supergirl, to borrow another's words, has "more to love, than to hate," and that has allowed it to exist and even thrive where another show would have been lain in a casket while many we're sitting down to a turkey dinner. In 2016 I would never imagine that it would be daring or "brave" to be optimistic, compassionate, fun, or wear a skirt while battling crime. The move towards "adult" themes in superhero shows, which always seem to coincide with a jaded, cynical outlook, slathered in darkness and dressed in darkest night, has always made me wonder if that is what being an adult is about. An outlook that life holds no option other than the worst one imaginable, and that to believe differently is to invite reprisal in the form of secondary school name-calling, and pseudo-intellectual chastisement. Supergirl, and her CW compatriots are a counter to that notion (except for Arrow, ugh) and QED that there isn't only one way to look at life...or at superheroes.