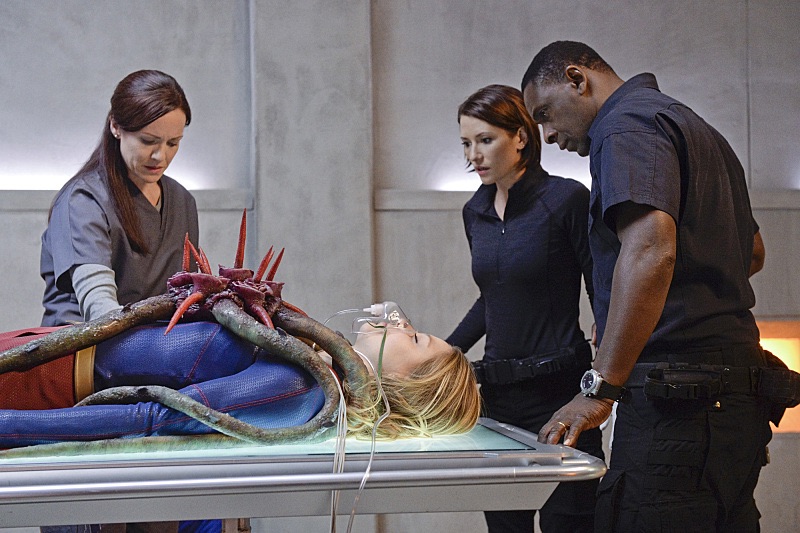 Rating - 4 (out of 5): The theme of surrogacy is on full display, and if one does the legwork, it has been for some time. "For the Girl Who Has Everything" borrows from the Alan Moore story, "For the Man Who Has Everything," but only skeletally. Instead, and quite wisely, Supergirl uses the frame of Moore's Superman tale, to construct an episode suitable to its needs and liking. Krypton isn't a dysfunctional, politically charged mess in Kara's imposed reverie, it's a place of peace and family. Kara's resistance is initial, and becomes gradually less and less, until she's "gone native," complete in attire and hairdo. Anyone hoping to see a paint-by-numbers, BR-rip of Moore's work, will be disappointed, but those who wanted to see more of what makes Supergirl a top heroine, episode 13 shakes free of any unlucky connotations, and sets viewers squarely before a story that could only be told for Kara Zor-El in this time and on this show. The greatest reason for this is the dynamic of surrogacy that has, intentionally or otherwise, been developed up to this time. While Superman may have the Kents, Kara has an extended "family" that tricks out the interplay between the characters, and brings forth probing questions, subtly, in the form of Alex's question to Astra... and her response.

Kara is a daughter of the House of El, but also one of the Danvers girls. Alex is her sister, while J'onn has looked upon Alex as a daughter since being charged with her safety. Astra is aunt to one sister, and enemy to both. It would be soap operatic with the quality of acting placed into the roles. In each story, there is tragedy: the loss of a world, the loss of daughters, the loss of a father, and these losses are survived through the surrogacy provided by another's genuine love and affection. In Moore's work, the Black Mercy is defeated by Superman's will, which corrupts an idyllic Krypton. Supergirl's freedom comes from Alex's overture of love; a heartfelt plea strong enough that Kara can reject the loving fantasy created for her. J'onn's concern for Alex is matched by Jimmy's loyalty to both women, which allows the time needed to defeat the Black Mercy's fantastic ensnarement. However, the theme reaches an apex when Alex kills Astra, answering the question where Alex fits in the line between Astra and Kara. It's certain that Non, who displays an excellent silent grief, will exact a heavy toll on Astra's killer, be it a bond of blood or not, and just as was done with Maxwell Lord, the dynamic has shifted again, and viewers must return to find out how much.

The only portion of the show that was hard to swallow was the absence of Superman. Yes, it's Supergirl's show. Yes, she can do things on her own. Yes, to the apologies many will give. However, that Jimmy wouldn't alert him to the situation is just moronic. Kara is his closest living relative. If he would come to assist with Reactron, surely this qualifies? The mandate that is imposed on this show regarding Superman wears thinner and thinner with shows that demonstrate the family dynamic between Kara and Alex, adding Winn, Jimmy, and even J'onn to the mix. However to accept that Superman is always too busy, or that Kara always needs to do things without him (when everyone else from J'onn to Alex can assist) is straight malarkey. Hopefully, and with that hope equal speed, the mandate can be lifted and Superman appear, rightfully, on Supergirl. Aside of that, Supergirl continues to be the jewel in the crown I knew she would be, and that is with the show having yet to find its footing. Much as I love Supergirl, it still hasn't settled yet into a familiar, comfortable presentation. The experimentation is still high, but that's more a topic for a future critique. For now, it's enough to enjoy.