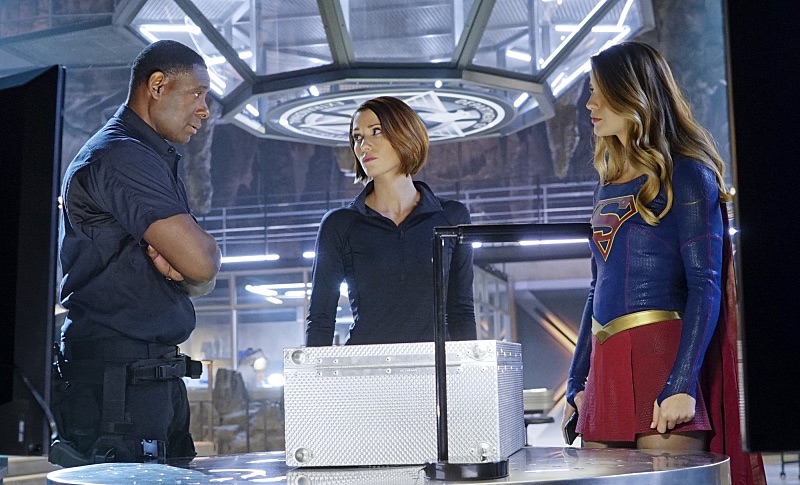 Rating - 4 (out of 5): The biggest concern in reviewing Supergirl for this reviewer, is how to tackle an episode that isn't enjoyable. Thus far, Supergirl has provided solid and consistent entertainment, and has steadily, progressively improved with every episode, with the exception of "Blood Bonds," and still has much room to grow. The biggest detraction heaved on the show is to dismiss it as "Superman in a skirt". The statement isn't without some credence, as like Mary Marvel before her, Supergirl was introduced as a female counterpart to an already established male hero i.e. we've got the whole demo covered. Although, Supergirl could easily be pigeonholed in such a manner, the show, much like Sterling Gates and Jamal Igle's excellent run on the comic book, has firmly established Kara as her own person, a character as heroic as her cousin, Superman, but still different, with concerns and day-to-day doings that aren't the mirror image of the Man of Tomorrow. Similarities will exist, and these are for obvious reasons, but those likenesses bond Supergirl to a greater story, dynasty, and destiny. So, when we see Bizarro make an appearance on Supergirl, the knee-jerk reaction would be to voice how the show is taking Superman's rogues for her. Well, of course, that is the truth... but they are doing it so well.

Bizarro's insertion into Supergirl allows for some revelations that are interesting. One which is how much does Supergirl care for Jimmy Olsen? When tasked with harming someone Kara loves, Bizarro swoops in for Jimmy. Now, obviously Alex or Mrs. Danvers would be a more likely choice, the people who have known her longest and closet to her. That being said, who is foremost in her thoughts? Bizarro calls that into question, as she's composed of Kara herself, and the cracked simulacrum provides an answer, which calls much into question. Was Adam Foster ever an option, or merely an opportunity to ease disappointment? Deeper than the romantic aspects is the nature of Kara's core, which is intrinsically good; so much so that even her corrupted twin cannot be wholly perverted. In the end, Bizarro wishes to be forgiven of her actions, as opposed to the clutching sneer that typically defines the defeated villain. Bizarro, as shown on Supergirl, is the best live-action depiction to date, fully going for the integration of what has been established beforehand in comic lore, and what the needs of the show required. Overall, Bizarro's entry is well done, and hopefully she'll come again, but without falling into the trap of making her the bum of the week.

I was surprised that Cat's antennae weren't up, as seeing the possibility of an imposter should have her squarely looking at "Keira" again, particularly since Kara is the one who brought it up. Adam Foster was like an ice-cream hit, cold and out. I wonder how much time is spent on the wire-work, as they really go for it in episodes like this one. It's not Crouching Tiger/Hidden Dragon, but they aren't shying away from those levels either. Who would have thought that Supergirl would channel Superman, better than the man himself? The mythos, the villains, action without sacrificing romance, humor without neglecting compassion, and all the while taking the material seriously enough to be inspirational. If Superman's toys can't be used by him, while he's brooding or riding a motorbike, Supergirl is a worthy heir to what's been left by the wayside. Unapologetically, classic in style and outfit, unafraid to be happy when the Zeitgeist says otherwise, and mostly, courageously heroic. Right down to her captured DNA. Next time I'll devote more space to Maxwell Lord, whom I need offer an apology, but it is Kara's show after all... though I still want to see Superman on it.