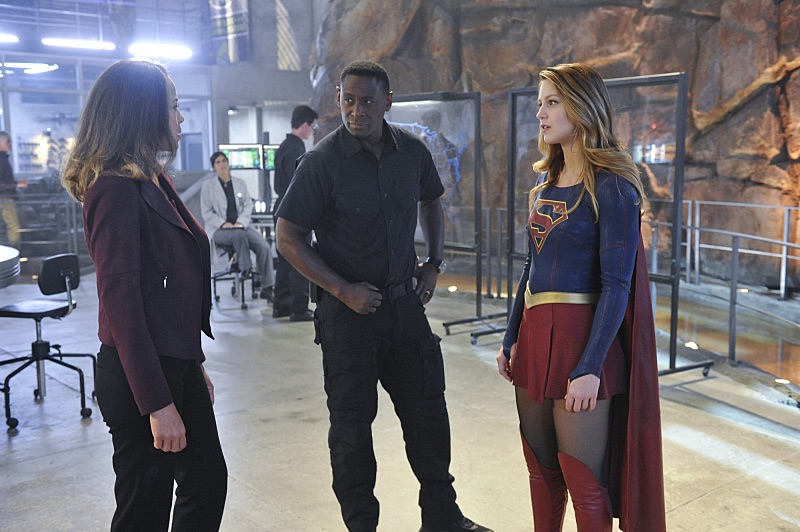 Rating - 4 (out of 5): From cliffhanger to cliffhanger, Supergirl keeps up the pace set by last episode, with a neat trimming of subplots to allow for Hank Henshaw, who has had excellent scenes since returning from hiatus, and his as yet unrevealed history as a green Martian. It's curious to wonder if viewers realize how much Supergirl has grown as both a show and a character since its inception? The show opens with Supergirl pulling a rescue with no problem or worry, almost as if it's a commonplace thing for her to do. If one remembers back to her debut and the saving of the aircraft, or her bittersweet fumble with the oil tanker, it's apparent that Kara has been putting in the time to become better and is better at what she's chosen to do. It's subtle, and without heralding or fat lines of exposition, but it's also the best way to handle it, as Supergirl isn't a character looking for glory. However, and this has become recurrent with Supergirl, the show still isn't 100 percent, and of all things, it's the romance department that's taken a fall, and for obvious reasons. Still, Supergirl is delivering on every level needed, that viewers can pardon its weakening... though this reviewer will have a go at it.

Comic readers have a better chance at knowing the Martian Manhunter's backstory, but seeing it played out on Supergirl, and not spoken about by J'onn was pleasantly surprising. Outside of animation, it's hard to recall if J'onn has ever been given such treatment, and by that, the obvious reference is to the money and time to tell his story. Usually supporting characters don't receive this much light, but J'onn received much, which is a testament to Supergirl's growth as a character and heroine. Her role is such that there's no trepidation at sharing the spotlight with a character who abilities and origins could easily be deemed more interesting than her own. Thanks to that confidence, viewers are treated to a gruesome looking White Martian, a switcheroo, and Supergirl making sense of it all. Harewood, however, deserves a lot of credit for making the most of his scenes. J'onn's interrogation by Non, impersonating Maxwell Lord, and now a shared centre-stage with this episode, Harewood has given Martian Manhunter more depth than would be expected, and made him a worthy peer for Supergirl's confidence. Again, it's surprising, if only for the expense of it all, but it's hard to argue with the results.

Romantic comedies usually get a poor go with most critics. Romance involves a vulnerability and sentiment that few people want to display, for fear of seeming foolish. I've no qualms about enjoying one here and there, if I'm dragged kicking and screaming, as it may be, but like most things, romance, in a series, is quite enjoyable when done well. It's something you can invest in, root for (I'm looking at you, Iris West!) and hopefully enjoy. Supergirl set up the traditional triangle, but knocked Winn in the gut when he moved out of the Friend Zone, and gave Jimmy a girlfriend who's mostly off-camera. While I wasn't expecting anything big to happen at this point, I was expecting something. Now, Adam Foster has been added to the mix, and he's immediately going for the rubosto de gusto. I accept the trope of all the lads wanting the lead girl, but dude, you just got here! Seriously, it's obvious that Adam is going to be smitten with Kara, and while I can entertain romance, I can only tolerate so much of a triangle, let alone a quadrangle. I'm certain whomever Kara chooses will be the right one... as long as it's not Winn.