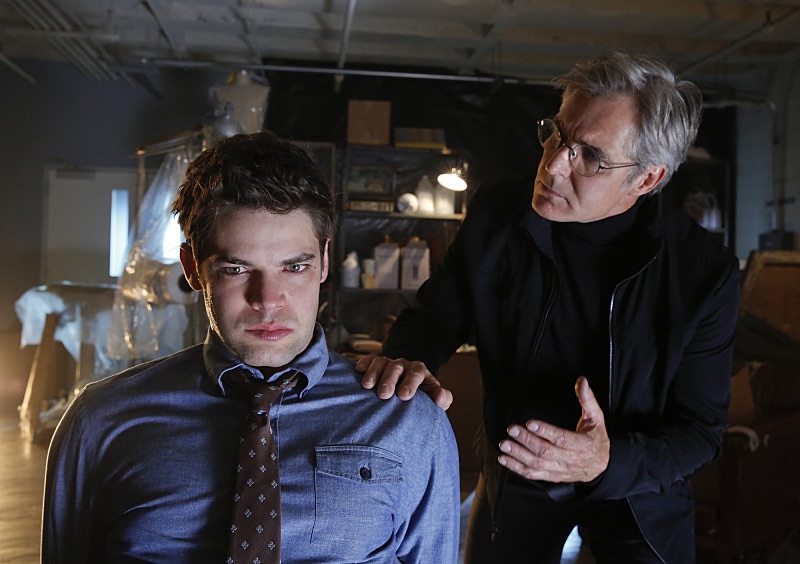 Rating - 4 (out of 5): A very busy episode that put Supergirl on the periphery, and brought just about everyone else to the forefront. It's Winn's episode, for the most part, and a heavy one at that. Winn transitions from comedy relief, to dramatic lead, and has the scars to prove it. Jimmy and Lucy are still at it, and it's a confusing set-up to say the least. J'onn, Alex, Cat, even Maxwell Lord get time; the writers earned their pay with this one. These type of episodes, where the cast is integral plugged into the sequence of events, so as they're all needed, many times do not come across well, however this one did, which was pleasantly surprising, particularly after last episode's blancmange resolution. There are, of course, some snags that were avoidable, but they would require a larger budget and a detente on the embargo on Superman. Last episode, it felt that Maxwell Lord wasn't the lad to challenge Supergirl, and yet by the show's end, he seems primed to do so. Lord hasn't impressed in the slightest thus far, and then, with one act, he reminds viewers why patience is needed, and a villain should never be underestimated.

Winn has his chance to shine and takes it, for all the good that it will do the character. His intent to stay underneath the radar is usurped by his father, The Toyman, who is a great stock villain, if such a thing exists, and his attempts at tamping down his feelings for Kara are exposed as well. He reveals himself, even goes for the kiss, only to be met with the knowledge that he's unwanted by the one he loves, and loved by a man he can never truly escape. Still, he evaded the Friend Zone, which, unlike the Phantom Zone, is unescapable. Jimmy and Lucy are confounding. They're together and it seems for no purpose at all. It's obvious that Jimmy doesn't want Lucy there, but no reason for his reluctance is apparent. Is it Kara? The proximity? Do we care? Hank Henshaw, Martian Manhunter has been making the most of his given time, in scenes with Supergirl, Alex, and elsewhere. It's very poignant to hear Henshaw's rationale for not going public, as while Supergirl is hiding her powers and alien origin, she can blend naturally where Henshaw cannot, in spite of his shape-shifting abilities. It all comes together with Maxwell Lord having bugged Alex's handbag, a move that wasn't seen coming, and only happens because Alex overestimates herself and underestimates Lord. She wasn't alone in that regard, either.

Martian Manhunter giving Kara flight training, was another instance where Superman would fit nicely on the show. Show her some tricks and fly off. Done. Kara's solution to the bomb threat was clever and made for a cool scene, even if the science isn't there. The scene with the quicksand was awful. Surely there's no reason she couldn't have flown out of it, but a simple use of super-speed would have solved the situation, and caught the Toymaster. However, since Supergirl is probably on a budget, I'll pardon the instance, stickler for accuracy with powers that I am, but not Supergirl needing to breathe. She's not human. She gets all of her energy from the sun, and doesn't require oxygenated blood, not after sucking a room full of noxious gas into her system. Let her be Super, it's what I'm watching for. There are a couple episodes coming up that are of high interest, featuring a White Martian and a top storyline; this installment went a long way towards stoking my interest in them, and Supergirl has returned to sure footing.