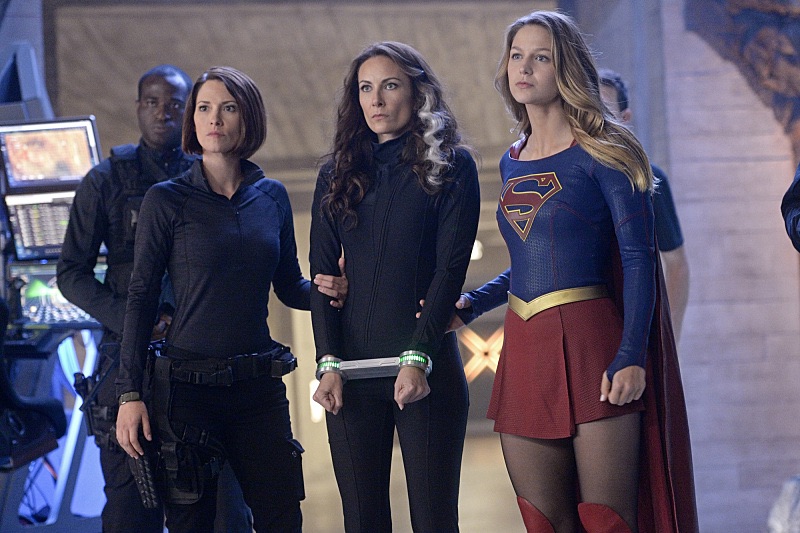 Rating - 3 (out of 5): This is the first episode of Supergirl that didn't quite hit the mark. It was too busy, and involved too many details that weren't necessary, especially after a cliffhanger. The most disappointing aspect was to watch Astra, who was poised to become a real threat, made sympathetic due to Supergirl's compassion. Supergirl, as has been stated previously, needs a villain... and not of the post-modern cloth cut. Someone who is good at being bad, rather than explaining why they are so. The weeks that have led up to this episode have done a remarkable job of establishing Kara's character, both as a civilian and a heroine. Supergirl's motivations are clear, and Kara allows viewers to connect that much easily to them. "Human for a Day" was excellent in displaying Supergirl not just as a heroine, but a symbol and inspirational figure. However, every good heroine needs to be put through her paces, and Supergirl hasn't had that yet. The character has grown from the onset, but hasn't been challenged by any significant force... and waiting for Maxwell Lord to finally do something, isn't the remedy needed for the Maid of Might.

Instead of a trying battle between Kara and Astra, time is lost watching Jimmy and Winn muck things up, simply because they need something to do. Their ineptitude is enough to make one's blood boil, especially when it takes away from centre-stage. To be frank, Jimmy and Winn are only entertaining when they're hustling over Kara; that's how little development they've received, lampshade and light that they've become. That being the case, to focus on them for any amount of time was exasperating. It's obvious that Jimmy is going to get caught, as we've seen him display no skill in such department, and while hasn't been made into a Marty Stu, that's the only way the scene would have worked. Jimmy being beaten by Maxwell Lord was pathetic. He showed the toughness of a perforated plastic bag; again, no development. However, that's still only slightly worse than watching Astra stand down when she has the upper hand and the numbers as well. If the plan isn't to rule the Earth, which it is, what pray tell will postponing the inevitable produce? The time to strike was at hand, and Astra held off for reasons that can only amount to sentiment. It's a hard pill to pound, let alone swallow, but that was what the episode amounted to, at the day's end.

Good writers know not to corner themselves with situations that they cannot get out of a la Robert E. Howard. However this installment displayed three great weaknesses. Astra, Cat, and Superman. Astra is now a questionable baddie at best. Cat was made to discover Kara's secret, only to have it undone in a manner that calls her IQ into question, but Clark texting at the show's close was risible. Of course Kara needs help. She's taking on a dozen or more Kryptonians, with powers and abilities the same as Superman. The fact that Superman isn't there is just unbelievable. What else could he possibly be doing that could take his presence away from this situation? It's not a job for Superman or Supergirl, it's a job for both of them... and Krypto. However, the ridiculous drive to keep the two separate was on full display here, and needlessly so. Let one Kryptonian escape Fort Rozz, but not all. Let Cat get near to Kara's secret, but not so close that she seems foolish when tricked to believe otherwise. Most of all, give me a good villain. Someone unequivocally bad, and good at it, so when Supergirl takes her down, the cathartic moment needed will be there.