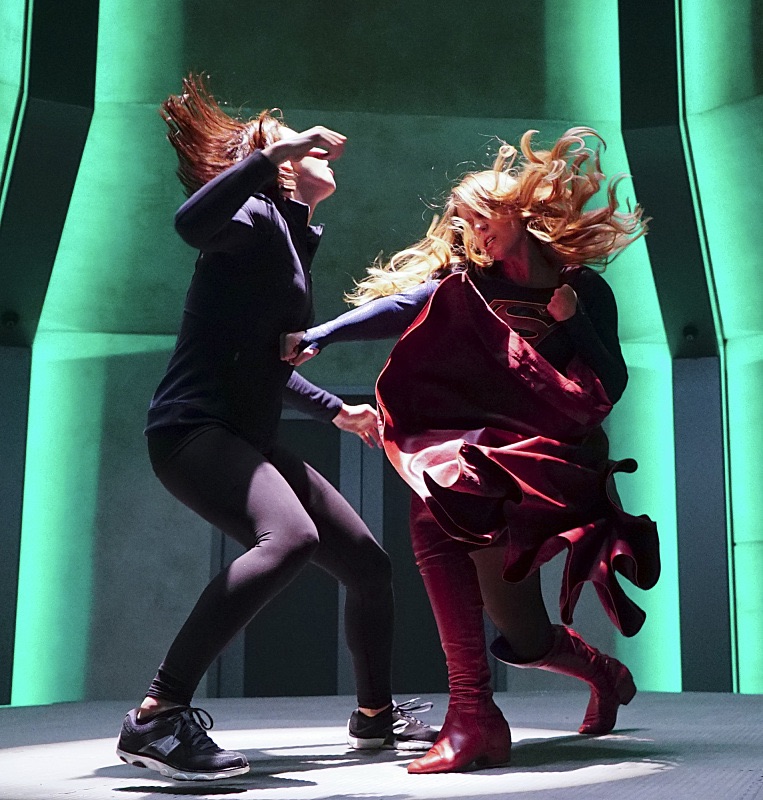 Rating - 4 (out of 5): The worst thing about the "finale" for Supergirl is the wait to see how things are resolved. Supergirl has been able to thread a very fine needle in staying true to her roots as a character, and delivering dramatic turns that do not compromise the integrity of her fibre. This is most apparent in Kara's fight with Astra, and her being cornered by Cat Grant, who next to Supergirl, has received the best development of any player on the show. Laura Benanti deserves much credit for playing a dual role and making it work well, with a little help from wardrobe which also provided the, hopefully, unintentional snicker-groan moment delved into below. Supergirl goes for a much deserved rest over the holidays, leaving behind a nicely stocked effort leading up to it. It will be interesting and telling to see if the aforesaid can be improved upon further, as there is still ample room for more, which can only delight fans of the show greatly, but also because as Supergirl decided not to trade optimism for cynical trappings, the show has more options than its darker counterparts.

If you've been a viewer, you'll note the gradual movement that hit Top C with this episode. Kara is a much better, fiercer fighter than shown earlier on, and it hasn't come magically, through the blessings of "off-stage" and "plot-wizardry," but from the commitment to developing that aspect of her character. When Kara faces Astra again, it shows how much she's learned, though not enough to tell she's being deceived. Cat has been piecing together clues left indirectly for her by Kara, though all at once, leaving Kara in a very compromised position. Cat's development has left Kara, and possibly, viewers themselves with the sense that Supergirl's secret wasn't on her mind, and what's more, that if discovered, Cat would fall in line like Jimmy and Winn. Cat's last words and smirk let us know that isn't the case. For all of the humanity she's shown, she's still Cat Grant, and such a morsel of news isn't something that she'll keep unused lightly. Benanti, minus that dreadful artificial lock of gray, does an excellent turn as both Astra and Alura, even to the extent her octaves are different when she speaks, revealing her stage and musical theatre background. When the show closes on a cliffhanger, as serials are wont to do for their "finales", Supergirl has done everything needed to bring the audience back... hungry.

While Supergirl has received criticism for wearing a skirt, I wonder if Winn might not have helped out the Kryptonians with their outfits. Non looks like a European tycoon in a leisure suit, and hardly the fearsome villain that he's supposed to be. Jimmy deferring to Winn was confounding, as Winn has no chance with Kara. He's made the mistake of being a "nice guy" and is stuck in the Friend Zone, which, unlike the Phantom Zone, is inescapable. The DEO looks to take on Kryptonians with guns? Even if you've Kryptonite bullets, these lads are... well, faster than speeding bullets. Supergirl's fight with Astra was decidedly less destructive than the last time two Kryptonians faced off in a city (yep, looking at you Man of Steel), but while Kara does much right, what is it with knocking people through buildings? There are people in there. All the time. Lastly, with one phrase, we know that when we do see Superman, he'll be cool: "Superman doesn't kill." Thanks for getting it right Supergirl, and for a great opening for your first season.