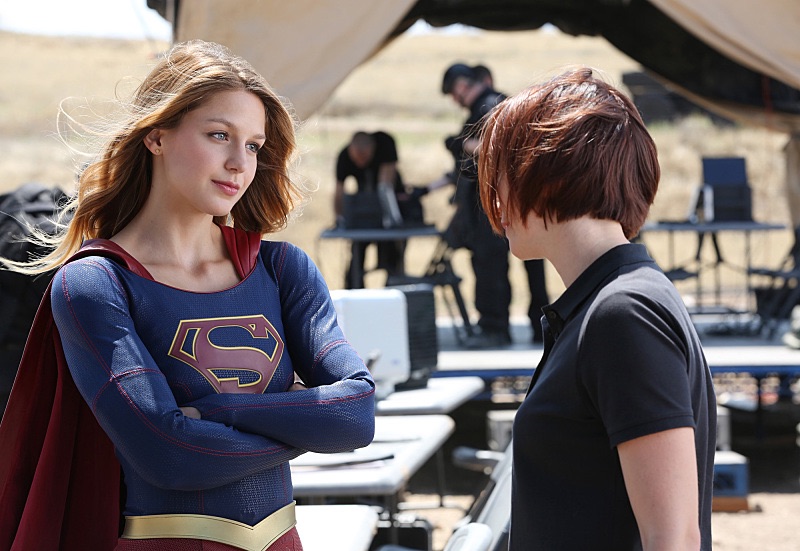 Rating - 4 (out of 5): Insert every cliché about a Rom-Com film that you can recall, then ice it with a slathering of television tropes and comic book superhero fixtures, and you have the latest episode of Supergirl. Surprisingly, and very pleasant in being taken aback, none of the aforesaid affects the enjoyment of the show or the entertainment value of what Supergirl has to offer. In fact, in spite of fetters that would drag down another show, Supergirl exudes a Kryptonian resistance to the trite measures imposed on her for the nonce, and while the above are valid criticisms, if made by this reviewer or another, it would be gross dishonesty to miss the heavenly glory of the moon, for want of focussing on the hackneyed hand that points the way. Supergirl benefits from two things in its immediacy to being gratifying: an unabashed willingness to embrace the comic book lore that it comes from, and a lead actress that is without a doubt, the best thing about the show.

Benoist's portrayal of Kara and Supergirl should be instructional material for those looking to emulate a secret identity, as envisioned by Siegel and Shuster. It's easy to see why you would never take another look at Kara, who with her hair tightly done, a bland fashion sense, and demeanor that one would easily wish to forget, leaves no impression that connects her to the flying wonder that is Supergirl. The brighter colors, outfit, and hair that must make James Olsen envious, set a fair contrast, and enough application that viewers can disbelieve the obvious. Of course, this is undercut with nearly everyone on the show knowing that Kara and Supergirl are one and the same. Still, Benoist's rendering of the character, both sides of her, sells well. Her determination to be better than the cynical advice offered by Cat Grant is laudable, and her words to James when he questions his direction are equally so. This is all found in a theme that is buffeted about for reasons that don't make much sense, but Benoist is the centre that holds and holds well.

If there is any glaring problem with the show, at this juncture, it's the absence of Superman. I've heard time and again the reasoning for this, but this episode renders those arguments ridiculous. Kara is out there trying to do things which could result in great destruction, and Superman has a hands off policy? No one fished the plane out of the water from the pilot episode? No one is going to help with the clean-up of the oil spill? It's really driven home when Supergirl explains the meaning behind the "S" shield, that it's a Kryptonian phrase meaning "Stronger Together". So why is Superman running around with the notion that it's "Stronger Without"? It's confounding that Kara would turn to James and Winslow for help with training, rather than the one person who could definitively help. It doesn't go along the notion of "Stronger Together".

The above noted and notwithstanding, if you're looking for something enjoyable, entertaining, and above all, positive, Supergirl is where you will likely accomplish that goal. The absence of brooding, cynicism masquerading as characterization, and tireless deconstruction of superheroes makes for what superheroes are meant to be at their core, characters that we can more than connect to, but creations that one can aspire to. Hopefully, Supergirl stays that way, and for a few seasons at that.