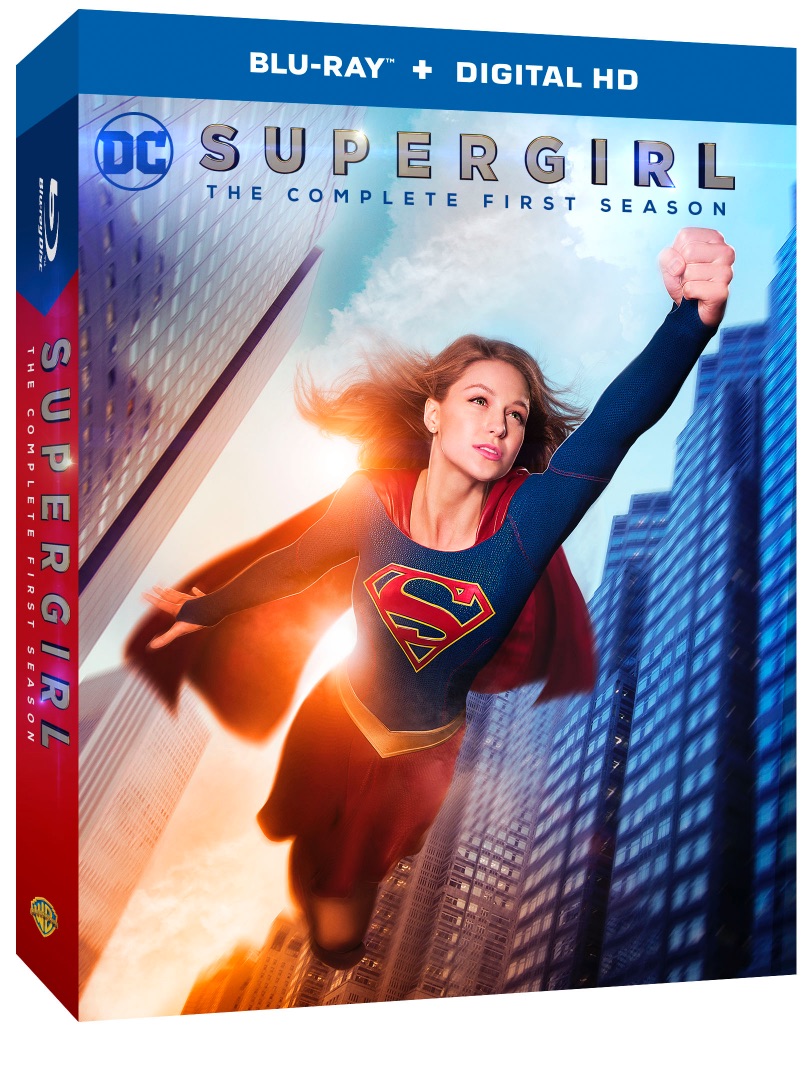 As of today "Supergirl: The Complete First Season" is available on Blu-ray and DVD from Warner Home Video.

As this website has reviewed the entire first season already, the following review will focus solely on the Bonus Material included in this home video release.

Fans can purchase the set which, in addition to all 20 exhilarating episodes, contains over an hour of extra content, including the 2015 Comic-Con panel, featurettes, deleted scenes and a gag reel.

Born on the doomed planet Krypton, Kara Zor-El escaped at the same time as her cousin, Superman, but didn't arrive on Earth until years later after being lost in the Phantom Zone. Raised by her adopted family, the Danvers, Kara grew up in the shadow of her foster sister, Alex, and learned to hide the phenomenal powers she shares with her famous cousin. Years later, at age 24, and now living in National City while working as an assistant for Catco Worldwide Media mogul Cat Grant, Kara has spent so many years trying to fit in that she forgot to ever stand out. All that changes when she decides to embrace her superhuman abilities and become the hero she was always destined to be. With the help of Daily Planet photographer James Olsen, her bioengineer sister Alex, and the research of the super-secret, off-the-grid Department of Extra-Normal Operations (DEO), who are tasked with keeping the Earth safe from aliens, Kara takes to the skies to protect her world.
BLU-RAY & DVD FEATURES:

2015 Comic-Con Panel: If, like me, you weren't lucky enough to attend the 2015 San Diego Comic-Con, then Warner Bros. Television has been nice enough to include the "Supergirl" panel, which features the cast and executive producers discussing the first season of the show, while also answering fan questions.

There are two documentary-style featurettes included in this collection. One focusing on J'onn J'onzz and the other all about the planet Krypton.

The Man From Mars focuses on the Martian Manhunter, his introduction to the "Supergirl" TV mythos, his transformation from Hank Henshaw, and his comic book background. There are some interesting insights into the development of the character revealed in interviews with David Harewood, Melissa Benoist, Chyler Leigh, Dan Didio, Andrew Kreisberg and Ali Adler.

A World Left Behind: Krypton explores the doomed planet Krypton as it appears on "Supergirl"... and throughout Season 1 we were lucky enough to see quite a bit of Kara's homeworld. It's interesting to hear Andrew Kreisberg and Ali Adler discuss the thought process behind the decision on how to portray Krypton. With a look back at both the comic books and the Richard Donner films, the executive producers reveal the inspiration behind Krypton's look for the "Supergirl" TV series. We also get an examination of key Kryptonian characters, including Alura, her sister Astra, Kara's childhood, and even young Kal-El.

The Gag Reel is a welcome edition to this collection. It's always fun to see the bloopers, fluffed lines and other mistakes and fun moments. The dance moves of some of the crew are impressive!

A number of episodes also feature Deleted Scenes, which can be accessed via the Main menu or the Episode menu. There are no explanations as to why these scenes didn't make the final cut, but seeing them is interesting nevertheless.

This collection has been put together with a lot of love and care. Special attention has been put into how the Blu-ray and DVD menus are presented. Little touches like menu selection animations and sounds add to the experience. The layout and presentation is impressive and much appreciated. You know you're getting value for your money.

The Blu-ray release of "Supergirl: The Complete First Season" includes 1080p Full HD Video with DTS-HD Master Audio for English 5.1. The 4-disc Blu-ray also features a high-definition Blu-ray and a Digital HD copy of all 20 episodes from season one. 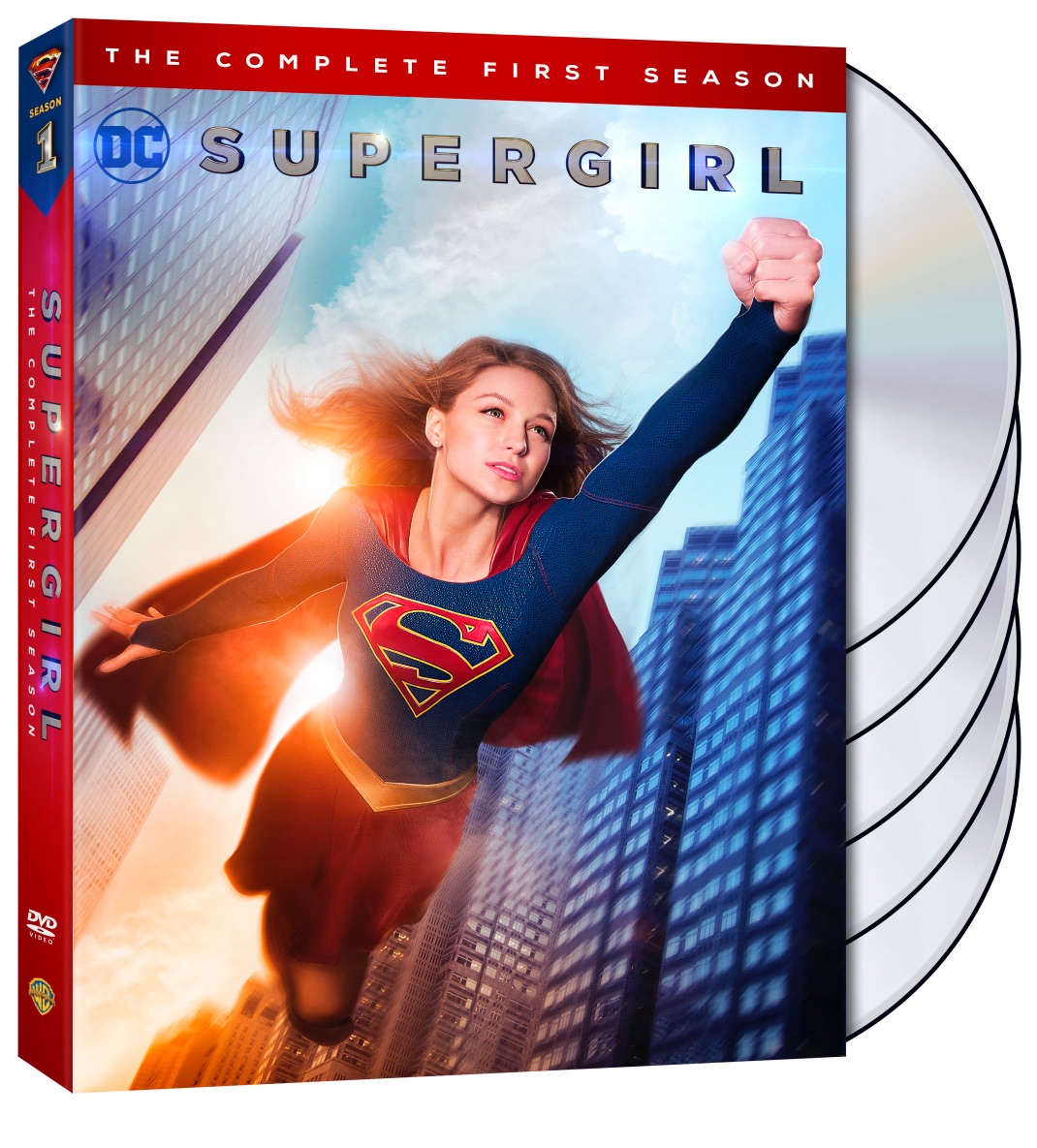 DIGITAL HD
The first season of Supergirl is also currently available to own on Digital HD. Digital HD allows consumers to instantly stream and download all episodes to watch anywhere and anytime on their favorite devices. Digital HD is available from various digital retailers including Amazon Video, CinemaNow, iTunes, PlayStation, Vudu, Xbox and others. A Digital HD copy is also included with the purchase of specially marked Blu-ray discs for redemption and cloud storage through participating UltraViolet retail services including CinemaNow, Vudu and Flixster Video.

Purchase "Supergirl: The Complete First Season" on Blu-ray or DVD from our Online Store.