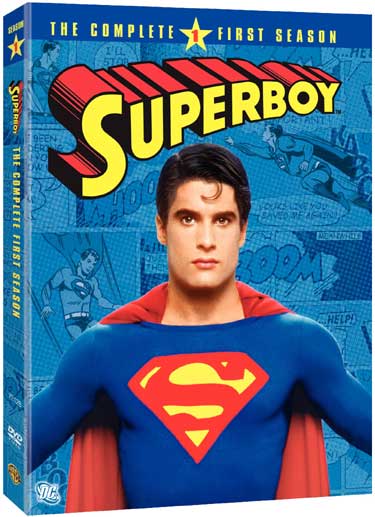 Box Art - 5: While it could be argued that a more exciting action pose of John Haymes Newton (now John Newton) as Superboy would have been, well, more exciting, I like this photograph. It's an iconic pose but one in which Newton looks very much like a boy of steel vis a vis a man of steel.

The background art of Silver Age Superboy reproductions is quite appropriate for a show that, especially in its first year, embraced that simplistic, child's logic of the Silver Age just as DC Comics was mistakenly jettisoning its association with the sillier aspects of its past. The comic book-ish background art also reminds me of the presentation Warner Home Video uses on the Superman-related animated DVDs like "Superman: The Animated Series" and "Justice League". This similarity makes sense as a marketing move as this DVD set will surely find a home with collectors and geeks like me but should also appeal to younger fans who've only seen or heard of "Smallville" and may never have been aware of this alternative (and certainly less self-serious) take on Superman's younger years. 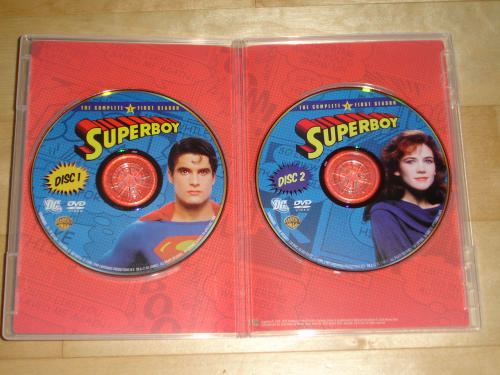 Disc Presentation - 5: It's clear a lot of care went into putting this set together. I sense the hand of Producer Ilya Salkind in this as it really does look better than virtually all the other Superman DVD sets that have come before it.

There are four discs in this set. All the regular cast is featured on the discs. But the best part of the presentation that sets this Superman-related set apart from every other Superman DVD set that's been released before are the two separate plastic mini-DVD cases that each hold two of the four discs. Notice that a photo of Superboy adorns the plastic case insert for Disc 1 and that it's a photo of Superboy on Disc 1 too. Then notice they've done the same sync-up with the characters featured on the inserts and the discs for all four discs in the set. That's a level of care in packaging I've rarely seen before in the Superman DVD sets.

By far, this presentation is the most organized of every multi-DVD set I've ever purchased and I encourage Warner Home Video to use it again.

Content - 5: The first season consists of 26 episodes and they're all here. While the show featured lots more super-powered adversaries for the Boy of Steel in subsequent seasons, there's a certain charm to many of these early episodes. Salome Jens and Stuart Whitman make several appearances as Ma and Pa Kent. We meet Lex Luthor played by Scott Wells - his earliest appearances are painful to watch as he utters lines like "Nobody talks to the President of the Senior Class that way. Nobody!" But even he grows into the role as the series progresses.

Though the first eight episodes aren't the series strongest, even by Salkind's admission when I interviewed him a few months back, they're strong character pieces that help establish the group dynamic between Clark, Lana, and T.J. White (son of Perry White played by Jim Calvert). The special effects varied widely in quality in those first episodes too but there are some moments even in those early episodes that are unforgettable in their execution. For instance, there's a moment in the opening to the third episode "Back to Oblivion" where Clark hears a cry for help just as he's thrown into a swimming pool and, as Lana dives into the water, Clark goes up, up, and away out of the pool and his wet Clark clothes and into the air as Superboy. Sure, the effects are primitive compared to what's possible today, but, without CGI, a flying boy is always a flying boy and not a digital simulation. Special Features - 5: This set is supplemented by a very strong set of special features. Producer Salkind and actor Haymes Newton do audio commentary tracks for "Revenge of the Alien, Part Two" and "Meet Mr. Mxyzptlk" - two of the first season's strongest episodes. Salkind and Haymes Newton play off each other well - Salkind is full of facts and anecdotes and Haymes Newton definitely has a good sense of humor about his time in the tights.

More fun is "Superboy: Getting off the Ground", a making-of featurette with the cast and creators. As with all the best reunions, it isn't so much about what's said as about how everybody looks almost two decades later.

Finally there's John Haymes Newton's screen tests for Superboy and for Clark Kent. These are fascinating to watch when one considers them in light of Haymes Newton's own recollections from the featurette that this all began for him on a whim. For someone with virtually no acting experience, he looked like a deer in the headlights at times, sometimes you could even catch hints of his annoyance with the 'turn-this-way, turn-that-way' never-ending camera poses and close-up shots required during a TV audition.

This is one DVD set that wouldn't have required any special features and still would have been welcomed by many long-time fans who'd been waiting a long time for this release. That it contains as many fun features as it does is really icing on a very tasty cake.

Note: While there's a feature advertised on the set as "excerpts" from the "Look, Up in the Sky" documentary, it's really no more than an extended trailer for the documentary.

Video & Sound - 5: This is the first time since the show's original run in syndication ended in 1992 that there has been any opportunity in the United States (and most other countries as well) to see these episodes. For years, I had VHS tapes of every episode - some were fuzzy and the commercial editing was haphazard. When finances got tight a few years back, I'd sold my original tapes. I figured the day had to come when the show would finally see some type of official release. Almost 10 years later, that day is here. Given my memories are of poor quality VHS recordings of these shows, I'm more than satisfied with the way these episodes look and sound.

"Superboy: The Complete First Season" on DVD is an excellent collection and well worth buying.