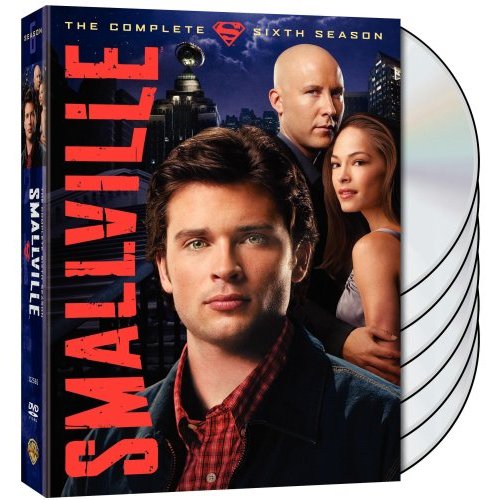 Actually, that's not a really fair title, but hey, it's true.

This Smallville DVD set, like the previous five, has great packaging, a wonderful set up, and it goes back to the classic packaging, as opposed to last year's, which miffed many a collector. I wasn't bothered much, but I can see the desire for uniformity. Ask Simpsons box set collectors about that.

The transfers are great, the episodes look fine, the sound is much better than typical TV viewing, which isn't that bad.

I usually buy for the extras. The commentary, features, and to get an insight into what they were thinking when they did episodes like "Spell." Or not thinking.

The Green Arrow piece is the highlight of the set, which is kind of unfortunate, given that the show is about Clark, but nonetheless, don't let that lessen my praise for the documentary. It takes Green Arrow from his beginnings, which I'm reading now in Showcase collections, and pushes him through Neal Adams, the political period, his death, and onward, featuring awesome interviews from the likes of Kevin Smith, Mark Waid, and DC heavyweights past and present, narrated by Mark Hamill. It's amazing.

The other featurette features the Ultimate Smallville Fans. In the interest of full disclosure, see the title. I was one of the top ten thanks to you guys, and though I didn't get picked in the top three (likely because of the negative cast of my later reviews, who knows?), it was still cool to see the guys who did win. And let me tell you, they make my obsession look pale, sad, and lonely.

The deleted scenes didn't offer much, and weren't that great. Mostly stuff that should have been deleted.

Then the big beef. NO COMMENTARIES. None. Not one. I mean, yeah, they're cheesy, but they were really, really the main thing I enjoyed on these sets. That's a major blow against me buying the next set (even if I got this one for free for being in the contest).

The Green Arrow webisodes are there, and they're still cool, as was the JLA stories. All of this is neat, but I've seen it before, and recently. They're still good.

As a package, this is better for someone trying to catch up. If you just saw this season, it doesn't add too much to your collection, beyond the Green Arrow documentary, which I highly recommend you watch.

Oh, and you hear my voice droning over the fan featurette credits. Not the face, but the voice, which is fun as all hell to me.

All in all, I have to rate it a bit low out of ten. I'd say a four or five, given the fact that it doesn't offer much new to the constant viewer. But the Arrow doc gets an easy ten of ten, so I'll let you balance that out as to how you feel on your own.

Back to the "Smallville: Episode Reviews" Contents page.