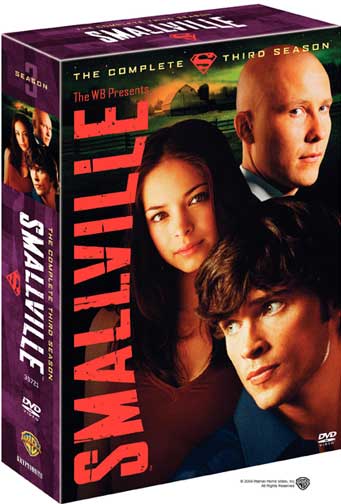 Okay, so I haven't done reviews for the last two sets, but that's not because I don't think they're worthy, more just because it's kind of too late now. Those who want it have bought them, likely, and the time has passed. Besides, since three is the benchmark for all of the stuff that made season one and two on DVD good, this is kind of a summation, if you will.

This box set is excellent, and it's one of the best in my collection. I have the entire run of Monty Python, and they just went NUTS with extras, but that has nothing on watching your favorite TV show in fine quality on widescreen with three director commentaries, a fantastic gag reel, and a bunch of really great looks into the cast and crew.

Reviewing the show like I do, you scrutinize every last little bit of set design, plot, everything, and these DVDs, particularly the commentary, show how every piece of the puzzle is agonized over, that though I may be harsh on a story, the big picture is that what we have here is one of the best television shows of our time.

If you watch them in sequence, yes, the format becomes apparent, but if you just sit back and look at each episode, particularly the events, the bigger picture becomes clear.

The commentaries are insightful, funny, and worth a good afternoon, which I spent on them. The only objection I had was the continued fetishizing of Lana on the part of the producers (She's pretty. Oh yeah, I agree. Totally hot. Pretty.), and that goes on for a while, with even Rosenbaum getting in on some of that action, but generally, I get the feeling I get when I talk to people about what it was like to write my books, that feeling that you spent a LONG time creating a hard-crafted masterwork, and now it's nice to just sit back and look at it, even if in retrospect some things were great and some things fail.

I don't know about you, but the first thing that I do when I pick up a DVD after I've seen the material is hit the deleted scenes. Despite the fact that they're the trash of the show, the things that didn't make it because they sucked, I always hope I'll get some incredible new piece of this thing that I liked, like with Austin Powers, the deleted scenes were just as great as the rest of the movie, but were cut because they only had 90 minutes (you impatient viewers!). Here, because of the TV show, I had the same hope, seeing as many times for time things are cut.

There were ten deleted scenes, but thanks to further elaborative shots, it's more like 15, and they are phenomenal. The other sets seemed to skimp on the deleted scenes because the sets were just getting their footing, but here we explode. Highlights include:

Intergang referenced in a scene with Morgan Edge, showing a man who has had his teeth pulled out for defiance (awesome).

A nice little scene with Chloe and Lionel fraught with tension, which was likely cut because Chloe insinuates that they've found the body of Morgan Edge.

The deleted scene from the Namaan and Zegeeth episode explaining how Lex and Lionel knew where to find Clark as he confronted his adversary (which, had they integrated it in, would have made the show TONS better). Plus, hey, you get to see Lana being choked for three and a half minutes (which is, I guess, why it was cut, because it really is ludicrous to be watching).

And the GAG reel. My god! I like to read philosophy, and I'm very into literature, but who DOESN'T love a good fart joke. Okay, ladies, roll your eyes, but there are three things which are inviolate in their ability to be funny. Monkeys, projectile vomit, and farting.

They have Lex in a cage, from Shattered, a character delivers his line, and in perfect timing, Rosenbaum turns and farts. The man is masterful even in his flatulence.

They also have some special effect goofing, one showing Kara next to a car which vaporizes with a farting sound before Kara herself explodes, and another showing a guy with crazy teeth that's something straight out of Conan O'Brian's IF THEY MATED.

And the thing which astonished me most, a deleted scene with The Janitor.

Now, I started watching Scrubs recently (people keep recommending shows, and that one stuck, because it's awesome once you watch it), and little did I know that Emily Dinsmore's Dad is the Janitor from Scrubs. Watch an episode of Scrubs, then watch the Dinsmore episode again. It's hilarious. I know it's tertiary, but this DVD tipped that off for me, so I gotta give credit where credit's due.

Nice transfer, great sound, a must-own DVD for anyone with even a peripheral knowledge of what Superman does.

And hey, they didn't even give it to me, I just went out and bought it. It's incredible. I've laid out 120-130 dollars for these sets so far, and on a budget, and they were worth every penny, especially this one. I look forward to four.

Back to the "Smallville: Episode Reviews" Contents page.