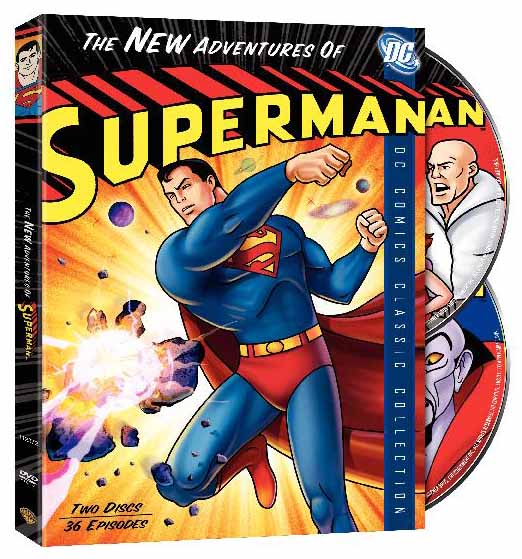 Box Art - 3: The cover of the box has an image of the Man of Steel that certainly resembles the Superman in the Filmation cartoons but, frankly, is more complex artistically than the artwork done for the show - it almost looks like someone took the Filmation Superman and married the image with the Superman of the 1940s Fleischer cartoons. Given the voice cast of the principles is largely the same in both cartoons, it's not an entirely inappropriate representation - though it does create the impression that the art in these cartoons is visually more than it is. The back of the box presents images that look more like they could be stills from the actual show.

Content - 4: These cartoons are my secret origin as they are for many other Baby Boomers and Gen X'ers. There were two television programs that are largely responsible for introducing me to the DC universe - one was the live-action "Batman" television show and the other was "The New Adventures of Superman" (and its two successor programs "The Superman - Aquaman Hour of Adventure" and "The Batman - Superman Hour") - both premiered in 1966.

I was 2 1/2 years old when "The New Adventures of Superman" ("TNAOS") made its debut on CBS -- on September 10, 1966. My real-life idol at that point was my brother. At 10 years my senior, he was 12 years old and more of the target audience for these cartoons than me. He watched them so I watched them with him. And that was that. From that point on, my life revolved around Superman, Batman, and the heroes of the DCU - and it's largely been that way for the 41 years since and counting.

The original voice cast of the 1940s radio show and the 1940s cartoons from Max and Dave Fleischer -- Clayton "Bud" Collyer as Superman/Clark Kent, Joan Alexander as Lois Lane, and Jackson Beck as the narrator - all returned to the Superman franchise with these 1966 'toons. In some episodes, Lois Lane's voice is provided by voice actress Julie Bennett.

The episodes comprising the 36 different adventures included on these two DVDs essentially represent two-thirds of each full half-hour episode from that first season. As originally presented in 1966 and 1967, each half-hour episode of "TNAOS" included a six-minute "Superman" adventure, followed by a six-minute "Superboy" adventure, and ending with one more six-minute "Superman" adventure. Only the Superman tales are included here. It's likely the Superboy adventures are omitted due to ongoing legal wrangling between Warners and the heirs of Superman co-creator Jerry Siegel over ownership of the Superboy character.

Every two chapters on the DVDs comprise the two Superman adventures that made up each of the 18 first season episodes of the show. That's why only every other chapter includes the show's opening credits, and why the alternating chapters each end with the show's closing credits.

The one place where the "Superboy" name couldn't be removed from these DVDs was in the closing credit listings of the voice cast where actor Bob Hastings is listed as the voice of Superboy. As a Superman fan, I don't even care who's right or wrong anymore in this ongoing Superboy litigation - I just want it settled. Nobody wins - not Warners, not the heirs of Jerry Siegel, and certainly not the fans - when the effect of the copyright law is to essentially remove the Superboy character from the Man of Steel's extensive history. Copyright law shouldn't protect creators' rights to such an effect that it retroactively revises history and keeps the creation out of the public eye altogether. Are you listening Warners? Are you listening Siegel family? It's time to make this right not for either of you but for the innocent third parties here - the fans.

As was the case with the "Batman" live-action show, these "Superman" cartoons were pretty much the comic books of the early 1960s come to televised, animated life. That's because this season was supervised by Mort Weisinger, the man who supervised the 1950s "Adventures of Superman" and held the reins on the Man of Tomorrow's comic book adventures as well.

Superman, Clark, Lois, Jimmy, and Perry all appear as they did in the comics of the time. Many of the villains appear, more or less, as they did - though some are simplified for a Saturday morning audience. These original adventures include villains like Lex Luthor, Brainiac, Titano, the Parasite, Mr. Mxyzptlk, and the Toyman. Then there are the obligatory space aliens, monsters, and natural disasters that were hallmarks of "TNAOS" and also its successor programs involving Aquaman and other DC heroes.

I recommend this set - notwithstanding the absence of the Superboy cartoons - to nostalgia buffs who were around for the original run or saw these repeated in various re-packagings over the years (including on the USA network about 10 years ago).

The most informative interview material comes from Filmation's Scheimer and historian Swanigan. There's a great story Scheimer shares about how Filmation bluffed DC into thinking they were a larger studio than they actually were in order to secure the right to do the cartoon. Unfortunately, Waid's given more screen time than he deserves given how little actually substantive information he shares.

Video - 4: The cartoons look fine considering they're 41 years old, and this is coming from a 43 year old who - like these cartoons - hasn't been remastered either.

Sound - 3: The cartoons sound fine but the closing credits play much louder than the cartoons themselves which can be a bit jarring.

Note: There is a bonus preview of the upcoming "Superman - Doomsday" DVD that plays automatically when you insert the second disc -- or you can access it by going to Title 32 on disc two. Thanks to Glenn McSparran for bringing this to my attention!