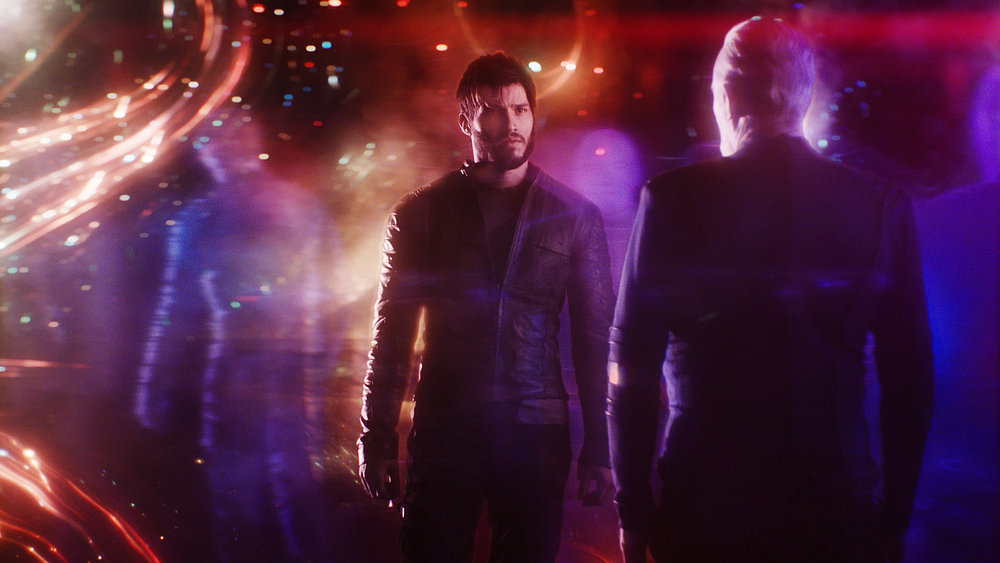 Rating - 4 (out of 5): After nearly a year, Krypton is back! I have to be completely honest, as into the series as I got last summer, the year off kind of threw me off. Sure, I was excited for the show to come back, to see General Zod's new Krypton, Seg's fate in the Phantom Zone, and so much more, but sitting down to watch the premiere didn't feel necessary. Boy, was I wrong...

"Light-Years From Home" takes place six months after last season's finale and a lot has changed. Nyssa and Seg's son, Cor-Vex, has been born, Lyta is now okay with torturing people, and a Resistance has begun to form with Jax-Ur and Val-El leading the charge. One of the most interesting character changes that this season provides is that in Nyssa-Vex, who is a character I loathed early on in the series but has since grown on me (she may even be my favorite character at this point). Making Nyssa a mother, forcing her to truly care about someone besides herself, is an incredibly interesting change and, I believe has a lot of potential. Out of all of the character arcs going on in the series right now, hers is by far the most interesting, and part of that is because there is no strict "Superman mythos" to tie her to, thus giving the showrunners complete creative control with her. This isn't dissimilar to Smallville's use of both Chloe Sullivan and Tess Mercer, two other intricate and compelling Superman supporting female characters.

An interesting contrast to Nyssa, which I believe will play a large part in her development going forward, is the regression of Lyta-Zod from someone who was willing to disobey orders based on her own moral code to now fully embracing the Zod name. We saw the beginning stages of this last season, especially since her mother Jayna (who has yet to make an appearance) went through the opposite change, but with the six month time difference I feel as though the writers have made a possible mistake in keeping us from seeing that development first hand, instead throwing us so far forward that we didn't get to see that degradation, or the possible effects and challenges Lyta faced during that time.

This of course is a double-standard, to a point, since I am by no means complaining about Nyssa's sudden change, since I see it as a positive and understandable one, but I wish we had been able to see more of Lyta's change from the end of last season to now, since hers is arguably more of a character shift (Nyssa we saw develop throughout Season 1 and thus her change makes sense).

On another note, I loved the Seg-El/Brainiac interaction on Culu, as well as Brainiac's clever reference to Brainiac 13 (the best Brainiac?...) when he makes note that it only took him "1.3 seconds" to come up with his master plan. When the two had escaped the Phantom Zone, the natural assumption was that they would work together to get off Culu and back to Krypton. Brainiac even makes note of this and since we've seen various other shows that pull these sorts of "enemies working together towards a common goal" stories, it made sense. But Krypton throws this all on its head as Seg not only refuses to go with it, but even goes so far as to slaughter Brainiac, something that his grandson would certainly not have done.

Seg is such an interesting character and a compelling one to follow as far as Kryptonian history is concerned since he is not Kal-El, yet there are moments where it's hard not to see Superman in him. It was certainly a relief to see that he and Adam Strange have become friends once again.

Speaking of Adam, I'm not really sure where he's headed this season. Yeah, he's got the red jacket, further moving towards his destiny to travel the cosmos as a hero, and his goal to fix the timeline (and save his world) is still intact, but as usual I have a hard time figuring out where the writers will take this character next. He's Krypton's wild card. We'll see how he and Lobo get along... I LOVED the KISS Army comment...

My only major complaint about this episode is that we didn't get to spend more time in Krypton's version of the Phantom Zone... It was alluded to so much last season, and various Superman related comics, shows, and animated series have done Phantom Zone stories, I figured Seg and Brainiac would spend much of the premiere trapped there (maybe even meet Mon-El, Zod, or even Superman since the Zone is outside of time), but instead we only got a slight glimpse into a frightening future and Seg trying not to loose his sanity for a minute. It was a little bit of a let-down, but the rest of the episode was solid and gives me hope for the coming season.

Krypton has been entertaining, driven, and unique since the beginning and it only continues to do so. I'm certainly excited for next week!