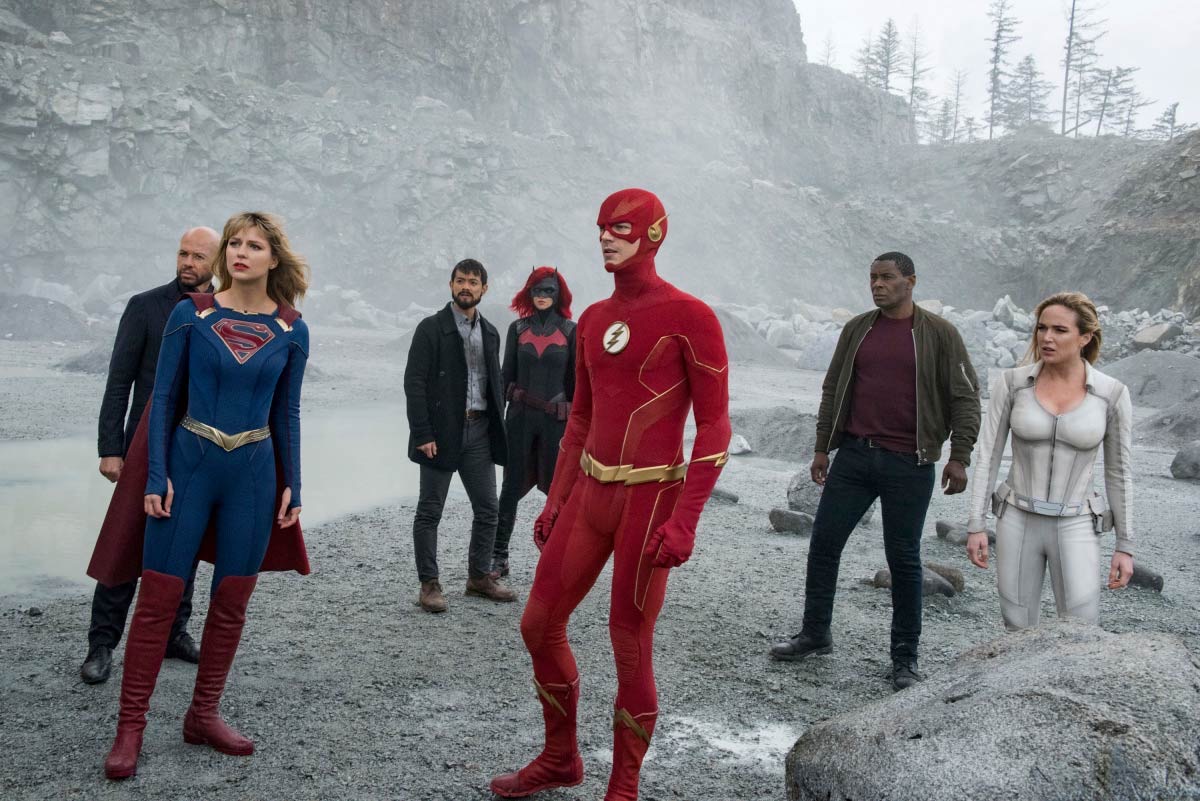 I honestly don't know where to begin. This crossover was so huge and had some many amazing moments, both in terms of story and in terms of "did that awesome thing really just happen or did I imagine this whole thing, please don't let me be in a coma right now". The cast and the crew had to ride a really fine line between fan service and telling a good story and I think they did a spectacular job in doing so.

I'm combining parts four and five into one review because they aired them both on the same night. It would feel weird to try and split them up because I didn't have to wait to see the next part beyond watching a commercial or two before the next installment began. I think it's a testament to the story that even though these were two different shows with two sets of writers and directors that it didn't feel like it was coming from two different creative teams.

More than that, I am extremely impressed that while this wasn't a straight up adaptation of CRISIS ON INFINITE EARTHS, they got enough of the beats and moments that I was satisfied as both a fan of these shows and a fan of that maxi-series. The changes they made were a good fit for the show.

For example, (and at the risk of fansplaining) in the original comic book series, it was Pariah that (supposedly) unleashed the Anti-Monitor on the multiverse. In the comics, the Monitor and the Anti-Monitor were opposites that battled for millennia until a massive, simultaneous blast put them both into a space coma and it was Pariah's experiments to witness the birth of the universe that (again, supposedly) woke the Anti-Monitor from his slumber. This is on top of an ancient Oan (from the planet Maltus) named Krona that was another one of these science types that just HAD to see the birth of the universe and in doing so created the multiverse. In part four we learn the Monitor's origin, which is part Krona and part Pariah, but it works so well for this version of the story.

Another example is the parallel structure of the final acts compared to the original issues. In issue ten of the original Crisis, a team of heroes (including the Spectre) went to the dawn of time and fought the Anti-Monitor. In issue 11 we got the first glimpse of the new DC Universe and watched characters deal with those changes and in the final issue the Anti-Monitor attacks one final time (along with his shadow demons) and the heroes all take him on, even though he is this giant, cosmic being. We saw glimpses of all of those in these two episodes and there was this feeling of validation for the original comics that made me...happy.

Seriously. I had the biggest grin on my face for most of the two hours I spent watching these episodes.

The surprises were also grin inducing. The Ezra Miller Flash cameo was a complete shock and I literally exclaimed something I can't repeat here. Full disclosure; I am not much of a fan of the cinematic DCU, but it was really cool to see the two Flashes meet and have this moment where they are friendly and a little envious of each other. There was a subtext to the scene that said, "Yeah, one of us is in the films and one of us is on television but we're both the Flash and we both have fans and there is no beef between us." I think this is a lesson that the larger fandom needs to learn.

The final ten minutes were just a joy to watch, even though part of it was Ollie's super-hero wake. I lost my freaking mind when Barry unveiled the table with the chairs with all of the symbols on them. Like, I can't even describe how ecstatic I was. Yes, there have been live action versions of the Justice League in the past (counting the never aired pilot from the nineties, the Junior Life Guard Association from Smallville and the major motion picture) but to see this live action version was just special because I never thought anything like this would happen.

It's kind of funny in a way. When Arrow began it was over a year after Smallville ended and even though Smallville steered into the comic book/super-hero skid more in its final seasons that it did in the earlier ones, Arrow was promoted as this ultra-serious, ultra-realistic take on Oliver Queen and while it wasn't "no tights, no flights" it was "no powers, no costumes". Slowly more of that started to creep into the show and then The Flash series began, and the gloves were off.

Or on. Since the Flash wears gloves.

Then came the Legends. Then Supergirl. Then Black Lightning, which wasn't originally part of the Arrowverse but that doesn't matter. The CW super-hero shows proved that you could do comic book accurate (or really close to it) versions of these characters in live action and all of that led to Crisis. Even if there is never another meeting of this Justice League (or Super Friends), the idea is there. What started as super serious is now super fun. In the beginning it was Ollie shooting people with straight up arrows and in the end, Ollie became the Spectre and fought the Anti-Monitor.

And I am here for it.

Then Gleek showed up and they started playing the Super Friends theme and I went berserk.

Because it was all happening. Gleek. Was there. We didn't see him, but this was better than being a bedazzled design on a cell phone.

And that's my ultimate takeaway from this event. While Arrow is ending, the Arrowverse still has so much life in it. Ollie died, but all of the other heroes are still in place and have a lot of life in them. Supergirl especially. This new paradigm is exactly what the season needed, because I was not feeling that first half. The Flash is continuing. The Legends are continuing. Supergirl and Black Lightning are going on. We're getting a Superman series. And Stargirl. And that's just the CW. The codas with all of the multiple Earths was exactly what they needed to do, because even though there is now an Earth Prime, that doesn't mean we can't have a multiverse around them.

And that is just so freaking cool. Because even if one isn't your cup of tea, there is something else that is out there for you.

It may not be what the writers were trying to say, but it's what I got from this event.

And I am just so happy right now because of it.

I realize that not everyone might feel this way, and that's cool. For me, the cast and crew of Crisis on Infinite Earths gave us the single greatest live action super-hero event that I have ever seen. I'm not kidding and I'm not being hyperbolic. Better than Endgame. This was everything I wanted and more.