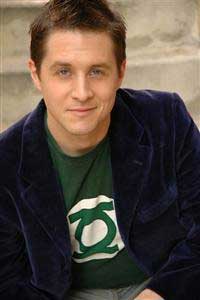 Actor Yuri Lowenthal is the voice of Superman on Kids' WB Saturday morning cartoon "The Legion of Super-Heroes". The second season of the animated series is scheduled to premiere on the Kids' WB on The CW at 11.00am on September 22nd.

"Superman returns from the 21st century with greater development of both his physical prowess and far better utilization of his powers to help the Legion toward victory in the 31st century and beyond."

The Superman Homepage spoke with Lowenthal about season two and what fans can expect.

The Superman Homepage would like to thank Mr. Lowenthal for fitting this interview into his busy schedule.

Q: Season 2 of "Legion of Super Heroes" premieres on Saturday, September 22nd, what can fans expect of the new season?

Yuri: Even more coolness than the first. New Legionnaires (of course, not new for die-hard LoSH fans), a "new" Superman (as well as the old), new villains and an even cooler look.

Q: So explain this whole two Supermen thing? I believe you're voicing both versions?

Yuri: Thankfully, that's correct. Without giving too much away, I'll just say that one is the Superman you know and love from last season (only 2 years older) and the other is a Superman from the future, cloned from our Superman's DNA. He's bigger, badder, and has no sense of humor whatsoever. At first, anyway...

Q: What do you think of allowing Superman and his teammates to grow and mature? How do you show that maturation in your vocal work?

Yuri: I think it's gonna be cool. Hopefully it'll show. We worked with the director and creators of the show to bring 3 years of maturity to the Superman from last season, and enough of a difference between him and the Future Superman.

Q: What new Legionnaires can we expect to see in Season 2?

Yuri: I don't think I'm giving too much away by saying new Legionnaires this season include Chameleon Boy and Karate Kid. C'mon, half the fun is seeing who's gonna show up next. It's like going to record the show for me. I can't wait to get there to see who shows up to play the guest villain/hero of the day.

Q: Is Imperiex the only villain the Legion will be going up against this season?

Yuri: No. New villains as well as a couple of old ones from last season.

Q: In addition to the two Supermen, are you providing any other voices on the show?

Yuri: Not really. Little ones here and there.

Q: The same day that "Legion of Super Heroes" Season 2 debuts, so does the new season of "The Batman" with special guest star Superman - any concern with 3 Supermen on one day? Do you think this will be confusing to the Saturday morning cartoon audience?

Yuri: I know, it's like it's National Superman Day. They're very different Supermen, on very different shows, so I hope it won't be too confusing. Maybe for the really young set.

Q: Do you read the companion comic book? If so, what are your thoughts on it?

Yuri: I actually have been collecting it! I collect everything Legion now. Even those McDonald's Happy Meal toys, and I haven't eaten there in years... The comic started out a little simple for me, but in the last couple of issues, I think it's really started to hit its stride.

Q: Will we see any more of Clark Kent or the Legion in Smallville present day?

Yuri: I don't think so. Not this season. It's all Superman, all the time.

Q: Will we see the legacy of any of Superman's friends or his past superhero colleagues in the future?

Yuri: Honestly, I'm not sure. I don't remember much of that from the recording, but when the animation comes back, they've always snuck insider gems in, so I wouldn't be surprised if we saw some familiar faces in the background from time to time.

This interview is Copyright © 2007 Steven Younis. It is not to be reproduced in part or as a whole without the express permission of the Superman Homepage.