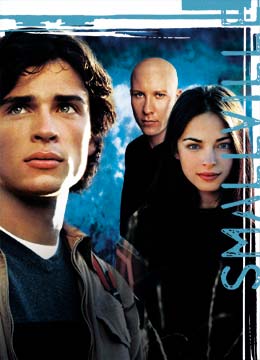 The Superman Homepage caught up with Jeph Loeb to talk about his new position as writer on the hit TV show "Smallville". Jeph is well known to Superman fans as the writer of the "Superman" comic book title over the past couple of years, and the writer about to take on the new "Superman and Batman" comic book.

I'd like to thank Jeph for taking time out of his busy schedule to answer these questions about his work on "Smallville"...

Q: How different have you found writing about Clark Kent for "Smallville" compared to writing for the Superman comics?

A: Well, the obvious answer is that Clark in the comics is a grown up. If we were to write about ourselves in high school, the cares and concerns compared to an adult are radical to say the least. The joy, however, is that in the character who was reinvented by Executive Producers Al Gough and Miles Millar, Clark is still working on not only being someone with powers; he's still working on being a young man, too. His concerns about what others think of him; his secrets; his loves. All of that is brimming. Later in life, he'll find happiness with Lois and stability with the Daily Planet, so his concerns are more on the Superman side of things.

Q: Will we see any correlation between your view of Smallville from your comic series "Superman For All Seasons"?

A: Al and Miles have been very generous in saying that FOR ALL SEASONS helped them conceptualize a view of Smallville that didn't require tights or flights. If my work had any impact on the show, I'm thrilled because I'm such a big fan. Specifically to my episode? I think only as far as the show has shadings from the book.

Q: Do find it hard to separate your thoughts on Superman between the comics and the TV show?

A: Not really. Am I tempted to bring in things from the comics that might not otherwise be there? Sure. But, that's on a day to day basis and the guys (Al and Miles) are VERY aware of what works for the show and what doesn't. I'm delighted when Al will turn to me and ask what the origin of "this" or "that" is; or "how do they deal with this in the comics?" because at the end of the day they are very respectful of the fans and of DC proper and want to do right by them -- IF it works for the show and the legend that they are telling. I don't know if my presence in the room actually contributes more "comic book" lore; but I'll bring it up -- and we'll give it a good chase. Please remember I'm part of an amazingly talented writing staff, so my contributions are only part of a whole. All in all, great fun, though.

Q: It's well known your a big fan of "Superman: The Movie" starring Christopher Reeve, and we've already heard the line "do you believe a man can fly?" in the pilot episode of "Smallville"... will you personally be writing in any references to the movie in future episodes?

A: That'll be on a "wait and see" list of things to do. It's funny, when I do it in the comics, the fans love to bust me on it; we'll see if they are equally vocal on the show. As we've long agreed, Superman fans are the most rightheaded, wronghead, outspoken, softspoken folks I've ever encountered -- comics, movies and television combined. But, they are also the greatest fans I've ever encountered because they LOVE the character. He's the best and so, he deserves the best.

Q: What's been the hardest thing about writing for "Smallville"?

A: Wanting to make it better. I've long been the person who says "I just try and tell the best story I can and hope folks like it." Since joining the show, I try harder, I think because the guys who created the show have such a wondrous vision -- I want to touch that. But, I've been doing this long enough that I know that it's a learning curve. I'd like to think that my early comic work -- which I still enjoy -- isn't as good as what I'm doing today, but that's natural in any job. It's the challenge that makes the work not only better, it makes the days better.

Q: Have you put any storyline proposals forward for the show that were knocked back? Ideas that you were really hoping to be able to examine but that were refused?

A: One outweighs the other. Like I said, it's a team, so I'll see a bit of me in that show or a bit of someone else in my episode; it just depends. We "break" (meaning line up the scenes in a detailed outline) each episode in a huge writer's room and the best stuff comes from the group. We ALL contribute. So, are there stories that get kicked back? Sure. But, sometimes that leads to more interesting stories later on. There are always going to be wonderful ideas and concepts that get kicked around in any creative environment and in television in particular, we have to remember that we have a season of 22 episodes. If each writer has ten ideas, then there's 100 ideas right there. I choose to look at it as this show is going to run at least 100 episodes and if I'm along for the ride, those stories will get told, one way or another. Interestingly enough, I fight hardest for other people's ideas because I KNOW those are good!

Q: How long have you been working on "Smallville" now?

A: The season 2 staff started in late April, early May. We came to work the first week of June. The friendships we've formed seem a lot longer -- but that's the nature of the show. Bond or break. We've chosen big time bond.

Q: Has working on "Smallville" met your expectations? If so, how? If not, why not?

A: Beyond. Coming from Buffy, which was a real family environment, I knew this was going to be different and it is. It's more like what I remember of college. Sort of an academic party, whatever that means! We laugh hard, we work hard and the end results are hopefully as good or better than the first season of SMALLVILLE -- no easy task because there were some superb episodes. Folks at the network and studio seem very, very happy. Now, it's up to the fans and viewers in September!

See ya on Tuesday nights at Nine!