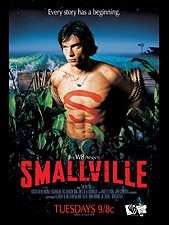 On Thursday May 2nd, Warner Bros. held a press junket with various fan sites, enabling them to interview "Smallville" Executive Producer Al Gough. The Superman Homepage was one of these sites and what follows is a transcription from my second telephone conversation/interview with Mr Gough. [Click here to read my first interview with Al Gough].

Steve Younis: Is "Smallville" going along as planned? Does the vision you had for the show when you first started out still apply or have the goalposts moved?

Al Gough: I think what's been really good is that people have been responding to the characters. If you'd asked me a year ago what I thought would drive the show I would have said the plots, but know I think it's the emotional stories that drive the episodes. So know I think it's trying to find a balance between that and trying to service the element of the Superman thing, you know a Superman show. I mean we're not interested in doing "Krypton Creek" but next season you'll see bigger episodes that'll be focused on his powers and then I think we'll see some more dramatic episodes, you know things that are more real-world. Maybe see the return of some of the "villains" we've seen from this season and other characters that we've met. We'll see the emergence of more of Clark's powers, we'll meet Martha's parents. I think that's the plan... to keep expanding the stories.

SY: One of the comments I keep hearing from fans is that we don't see enough of Martha Kent...

AG: You know what, you're going to see more of her and more of Pete Ross next season.

SY: How far away are we from having the meteor fragments actually called Kryptonite?

AG: Oh... we're still a ways away from that. But in Season 2 Clark Kent starts exploring more of his origin. You know the Season finale this year is about twisters hitting Smallville and everybody's lives are left up in the air, literally and figuritively [laughs]. And it's really going to blow things open for season 2.

SY: Will Season 2 see Clark finding out about his background and the planet Krypton?

AG: Yes, that's part of the journey, you know discovering your power. Season 2 is about getting to the heart of who he is and where he's from. I mean again, we're not going to see anything like the Phantom Zone or anything. But we'll definitely start to take steps in that direction in terms of discovering his origin and where he's from.

SY: Will you use the same method as the comics for Clark learning about his Kryptonian heritage? Will we see a holographic message from Jor-El?

AG: It's going to be a little more cryptic than that. It's not going to be like a download from Jor-El or anything like that. We'll just be taking small steps with that, but it'll be interesting. Because again, we all know he's from Krypton, but we'll be looking at what else was going on, what were some of the things that lead to why he was sent to Earth. Which again are further down the road as we start to uncover some of these things.

SY: Rumor has it that Chloe Sullivan is somehow related to Lois Lane... Is there any truth to this?

AG: Ah, you know I'm not going to comment on that one way or the other on that. [laughs]

SY: What are the plans for Clark and friends after they complete high school?

AG: Well they're about 3 years away from completing high school... so we'll wait and see.

SY: And when will you find out if you get to do a third season?

SY: In the course of the series, will Lex Luthor ever directly show a rivalry or hate for Clark?

AG: I think it's like a lot of things in friendships, they have their ups and downs. I mean in this season we've seen Lex come close to discovering Clark's secret and then in "Leech" sort of moving away from that, and then we saw Clark in "Zero" and "Nicodemus" start to wonder a bit about Lex. That's the whole thing, you know, will Lex get any closer to Clark's secret, will Clark start to learn about Lex and his past and what he's doing? And that's our intention, you know to continue the dance. I don't think it's a choice of turning eveil, I mean Lex is the kind of guy who wants to try and do the right thing, but he feels entitled, he's rich, he's smart, but he's jealous of Clark's family, you know what I mean? It's the greater desires of a peron taking over where they want to do the right thing. It's like Anakin Skywalker becomes Darth Vader, well the Lex in "Smallville" becomes the Lex Luthor we know. It's sort of a logical journey as well as keeping it as interesting as possible.

SY: And what about the relationship of Clark and Lana? How will we see that progress?

AG: [Laughs] That's the constant challenge! In the last 3 episodes we've started to see the relationship between Clark and Chloe build, and somethings going to happen with Whitney at the end of this season. I think Clark and Lana will remain in unrequited love, but they are kind of soul mate in their relationship and we'll see that develop.

SY: How does the announced plans by Warner Bros. to start production on a new big-budget Superman movie in 2003 affect "Smallville"?

AG: I don't think it honestly affects us at all. I think you have to look at these things much the same way as the comic look at their continuity. I mean there a various Superman comics. There'll be "Smallville" and hopefully a new Superman movie which will be different... I think they can peacefully co-exist.

SY: Many people (including myself) are of the opinion that Warner Bros. should allow "Smallville" to run its course (say 5 years) and then create a major motion picture starring Tom Welling as Superman, allowing Tom (and the audience) to grow into the role. What do you think of this idea?

AG: Look that would be great! From your lips to God's ears [laughs]. That would be terrific. And you know if the show is still on the air and continues to go well I'm sure those discussions will happen. The Entertainment conglomerate will do anything it can to squeeze as much money as it can from one of its properties.

AG: Yeah, which is exciting! There'll be a comic book from DC. And I mean we grew up with shows like the "Six Million Dollar Man" which had Lunch Boxes and Action Figures, and that's sort of what we aspire to do, Which is to create a show that has that sort of cultural impact. So that's exciting.

SY: There have been reports of a "Smallville" DVD being released in Canada. Can you tell us about that?

AG: Basically what it is is the Pilot and "Metamorphosis" as an hour and a half movie. That was always set up to be done like that from the beginning. I mean we set so much up in the pilot episode that needed to be explained in the second episode. I think it'll be released in Canada on June 4th. And honestly, I'm getting all the information from websites, like the yours and KryptonSite and Dark Horizons, because they [the WB] don't tell us sh*t. I think it's going to be in Europe soon after and then there's the issue with the States in regards to syndication and things like that. But the fact that they've re-run the thing so many times... I don't think the DVD is really going to hurt anybody. But we hope so, I mea it's going to be a good DVD. Miles [Millar] and I did a commentary, and David Nutter was there for the Pilot and he's going to show the storyboard, we have a map of Smallville, and deleted scenes. I think it'll be a good DVD package. We'd never done that before, so it was sort of a great thing to do. And usually in the movies they don't usually allow the writers on the DVD track [Laughs]. Perhaps they're afraid they'll be a little too honest [Laughs].

SY: What about rumors that "Smallville" may change nights from Tuesday to some other night of the week?

AG: You know, we don't. The Networks go to New York and they're working on the schedule now. I think we'd like to stay where we are. We like the time slot, people know when we're on. And I think people like to stick with their viewing patterns, so you don't like to move shows around a lot. We're very happy in our very competitive time slot [Laughs].

SY: How many episodes will Season 2 contain?

AG: There'll be 21 episodes for this [1st] season and there'll be 23 for next season. You'll get an extra 2 episodes next year.

SY: Thanks for spending time chatting with me!

SY: Thanks very much. And continued success with "Smallville".