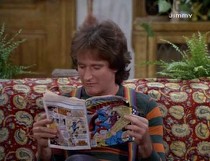 While he didn't personally make an appearance in the show, Superman was the focus of an episode of the TV series "Mork & Mindy" (starring Robin Williams and Pam Dawber).

In the sixth episode of Season 4 titled "My Dad Can't Beat Up Anybody", Mearth hero-worships Superman and Mork tries to impress his son by becoming a superhero himself.

Mork feels like a total failure as a parent when Mearth becomes confused because his hero, Superman, has two jobs and Mindy works while his dad stays home. Mindy, who is leaving for an assignment in Aspen, tries to reassure Mork that all kids go through periods of hero worship. While Mindy is away, Mearth finds Mork's spacesuit and wants to know if Mork is secretly a superhero. Although the parents have agreed not to tell Mearth about Mork's alien origin until he is younger, it strikes Mork as a perfect job. He slips into his "crime fighter" suit and takes Mearth to a seedy bar to look for bad guys. When an armed one of them terrifies Mearth, Mork goes berserk with awesome results. 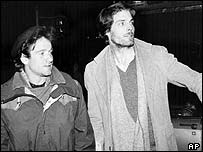 What's interesting about Superman's connection with "Mork & Mindy" is the fact that Robin Williams and Christopher Reeve were friends from their days as the only two students to be selected for Juilliard's prestigious Advanced Program from around two thousand applicants in 1973. Williams and Reeve developed a close friendship that stood the test of time and many personal challenges on both sides of the friendship.

At Juilliard, Robin Williams and Christopher Reeve made a pact to help one another throughout their lives. When Reeve was paralysed at an equestrian competition in 1995, Williams offered to cover any expenses not covered by insurance although it's unclear if this actually happened. From the start, both Reeve and Williams denied the rumor that the latter was paying all of Reeve's medical bills. Reeve did so through his agent in a San Francisco Chronicle article dated January 31, 1996. Williams did the same in an interview on the TV show "Extra" on February 12, 1996. 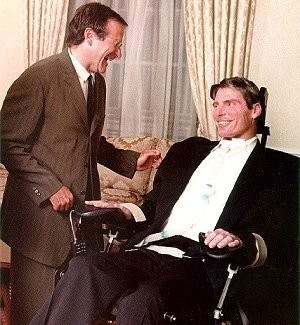 "We bought Chris a van and a generator," Williams told The Mirror in 1999. "It was really frightening because where Chris and his family live in Connecticut the winters are very harsh. One night the generator they had for Chris crapped out, so there was Chris's wife Dana outside in the middle of the night trying to hand-crank the thing. Now Chris has his own income because of his book, his record and various other sources so he's financially independent and pays his own bills."

Robin Williams definitely helped out in other ways though. Christopher Reeve lay there in hospital one day, the door opened and a man with glasses wearing a yellow surgical gown and a blue scrub hat entered. He said that he was a proctologist and was going to perform a rectal exam on Reeve. It was Robin Williams, reprising his character from the film "Nine Months". Reeve said, "For the first time since the accident, I knew everything was going to be okay."

When Dana Reeve also passed away not long after Christopher Reeve's own death, Robin Williams made good on his promise to take care of their son Will.