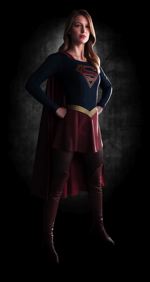 In this article I'm going to be examining, in detail, the Supergirl costume for the "Supergirl" TV series. I've previously written similar articles for when the costumes for "Superman Returns" and "Man of Steel" were revealed.

Initial Reaction: At this point in time we've only seen two photographs of Melissa Benoist in the costume. One photo is a medium shot from the head to just below the "S" shield, while the other is a full-body shot. The lighting and dark background make it hard to judge the colors and some other aspects of the costume... which seems to be a game the photographers like to play with their audience. They keep us guessing and create debate amongst the fans.

As I mentioned above, it's a little difficult in this photo to tell how red the cape is because of the lighting (and that goes for the costume over all), but I like the look of it.

The length of the cape seems just right. It sits about calf height or just behind the knee, which I think is perfect for a Supergirl costume.

We don't know if there's a yellow version of the "S" emblem on the back... But, as always with this feature, I'm not too fussed either way. I'd prefer to see it there, but it's not essential.

As with any cape for a Super-family member, the most controversy seems to be about how the cape attaches to the costume. Here, Supergirl's cape seems to tuck in nicely at the neck line, draping over the shoulder in minimal fashion. Just the way it should be.

Once again, due to the lighting in the photo it is very difficult to tell just how blue the main part of the costume really is. The color doesn't seem to be too different to the blue in Henry Cavill's "Man of Steel" costume. It is a darker blue than some fans may have hoped for, but I don't think we can fully judge this until we see the costume in daylight and/or brighter surroundings.

The neckline is spot on. It's not too low, and not too high. And as I mentioned above, it allows the cape to join the costume at an ideal position.

As with all recent Superman costumes, the material appears to have a small repeating pattern throughout the blue material. It looks very similar to that seen in Henry Cavill's costume.

There also appear to be two parallel red seam lines that extend from the shoulder down to the armpit region, and from their to her belt, down either side of the "S" shield. These red seams are also on the sleeves, extending from the wrist up to her shoulder. There also appears to be a similar red seam circling around her biceps (almost like an upper armband). It's a subtle design feature that adds a slight color variation.

The shape and design of the "S" shield is perfect. The size is just right. The "S" is the classic design except for a harder, flatter end to the "bulb" at the bottom end of the S.

The only real complaint I've heard from fans is that they've removed the yellow background from within the "S". While the red "S" is outlined within and without by a yellow border, most would have preferred the yellow continue to fill the background area within the shield.

While I'd agree that more yellow may have lifted and lightened the over all appearance of the "S", I'm actually thrilled to see they've chosen to go with a fairly traditional look for the shield and its placement and color.

Once again the "S" has been given a solid presence rather than just being part of the fabric of the costume. The "S" doesn't have the same texture as the fabric/material, but appears to be more like leather.

Supergirl's belt is very similar to the belt worn by Helen Slater in the 1984 movie, with the addition of two raised ridges at the top and bottom. The belt does appear to be more a feature of the skirt rather than just a belt, as it has no buckle as such.

The color, again, is difficult to discuss due to the lighting, however it does appear to be more of a golden color than a bright yellow. The belt also appears to have a leather look to it.

Supergirl's skirt appears to be the same fabric as the blue parts of the costume... just in red. The length of the skirt comes down to about mid-thigh length, which interestingly, appears to be a little longer than the skirt Helen Slater wore in 1984.

Additionally, in 2015, Supergirl looks to be wearing either red tights or sheer stockings underneath. A practical addition for someone flying around in a skirt.

The skirt does appear to have pleats on the front that match up with the red seams coming down the front of the bodice.

I've always preferred that Superman and Supergirl's boots be of a similar material to the rest of his costume, however here, they appear to be a leather boot.

It's hard to tell, because the heels of both feet are in shadow in the first full body photo we've seen, but I'm unsure if Supergirl's boots have heels or not. Perhaps, like with Helen Slater's boots, they simply have a slight lift at the back.

Unlike Helen Slater's boots, Melissa Benoist's Supergirl boots have no yellow in them. They're a solid red all over. However, the top of the boot does extend above the knee and sits on the lower thigh, where Slater's boots ended below the knee. Both boots however have a rounded top, rather than the double point Superman fans would be familiar with.

I'm unsure if I like the boot tops being above the knee. It doesn't look practical, but at least they didn't cut our knee holes like they did with the Supergirl costume in the New 52 comic books.

Now for the woman wearing the costume...

I personally haven't seen Melissa Benoist in anything, so I'll be judging her performance and portrayal of Supergirl with no preconceived ideas about who Melissa is.

She looks the part. She definitely looks young enough in the face to play a SuperGIRL. Her hair color looks good. It's not the blonde blonde that some people may have been hoping for. But I like the strawberry blonde look they've gone with.

Benoist isn't muscular, but neither was Helen Slater... and I don't think Supergirl needs to be anywhere near as muscular as you might expect Wonder Woman to be. She's supposed to blend in as a normal teenage girl. Besides, she gets her powers from Earth's yellow sun, not from being Amazonian-esque in stature.

I love the fact that they released one photo of Benoist smiling as Supergirl. I'm really hoping she'll have fun in the role.

As with any costume reveal for an iconic character, Supergirl's costume created a lot of debate across the internet. I was pleased to see that the reactions were mostly positive. I think a lot of people were pleasantly surprised with the classic approach the costume designs took in their approach to Supergirl. Too often in TV shows we've seen the Powers That Be shy away from the superhero costumes we know and love from the classic comic books, to something "more realistic" or "edgy" for their live-action version. I think fans were also somewhat surprised that there's very little influence (if any at all) from the current New 52 design seen in the comic books.

Most of the complaints surrounded the darkness of the colors/photograph. While I understand the approach to keep things somewhat hidden to not give everything away, it does frustrate fans to some degree, and I also understand that frustration.

All in all, I'm really pleased with the design of the Supergirl costume for this upcoming TV series. I wasn't expecting it to be as classic a look as what we've been given.