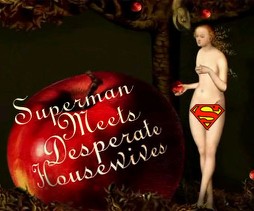 ABC's "Desperate Housewives" returns for its fourth season on September 30th and there may not be a live-action drama with a stronger Kryptonian pedigree this side of "Smallville". "Desperate Housewives" is the story of a group of families who live in the fictional town of Fairview on the same street, Wisteria Lane. It's a soap opera with a comedic twist. The show is narrated by the off-screen voice of Mary Alice Young, whose suicide in the first episode of the show set the other girls into investigating her death.

Teri Hatcher was Lois Lane on "Lois & Clark: The New Adventures of Superman" for four seasons. On "DH", Hatcher portrays Susan Meyer, the only divorcee of the group as the show begins. She's a single Mom, a bit of a klutz, always sticking her nose in where it doesn't belong, in love with the single plumber played by James Denton.

Incidentally, this is the second time a television Lois Lane was chosen to play Hatcher's TV mother. In the first season finale of "L&C", Lois's mother appears briefly at her wedding to Lex Luthor. Lois's Mom is played by Phyllis Coates, who played Lois Lane through the first season of TV's "The Adventures of Superman" with George Reeves.

Now "DH" is about to welcome its third former Lois Lane. Actress Dana Delany comes to Wisteria Lane this season as a woman who used to live on Wisteria Lane and moves back -- with a secret naturally. Delany voiced Lois Lane on "Superman: The Animated Series", "Justice League", "Justice League Unlimited", and will soon be reprising Lois's voice in the season opener of the CW series "The Batman".

This gaggle of Lanes aren't the only members of the Superman family to have done time with the "Housewives".

Actress K Callan, Ma Kent on "L&C", played Nicollette Sheridan's Mom in the third season finale of "DH". Of course, as Ma Kent, she eventually was Lois's mother-in-law on "L&C". Don't forget that Sheridan met Superman too - in the "Static Shock" episode "Toys in the Hood" where she voiced the cybernetic Darcy who was being stalked by her creator, the villainous Toyman, in Static's hometown of Dakota. Also in the third season finale was Pa Kent -- actor Mike Farrell ("M*A*S*H") played Milton Lang, the father of the politician Eva Langoria almost marries. Farrell of course was Jonathan Kent on "STAS" and "JL".

Some super men also have participated in "DH". John Newton - Clark Kent and Superboy on the live-action "The Adventures of Superboy" - played the gay cable guy on "DH" who gets beat up by Eva Langoria's husband Carlos during the show's first season and eventually charges Carlos with a gay hate crime (though Carlos really beat him up because he thought he was having an affair with his wife). Kyle Maclachlan - who currently plays Marcia Cross's second husband on "DH" - is lending his voice to the Man of Steel in the upcoming direct-to-DVD feature "Justice League: A New Frontier".

But wait, that's not all.

Jesse Metcalfe -- the gardener of Eva Langoria's dreams on "Housewives" -- was a freak of the week on "Smallville" - playing Van McNulty in two episodes.

"Ghostbusters" co-star Ernie Hudson played a Detective on a few episodes of "DH". He also provided the voice of Cyborg, a super friend and teammate of Superman's during the final incarnation of the "Super Friends" cartoon franchise, "The Super Powers Team: Galactic Guardians". Hudson also provided a handful of minor voices on "BTAS" and "STAS".

Fairview's just got to be a suburb of Metropolis.