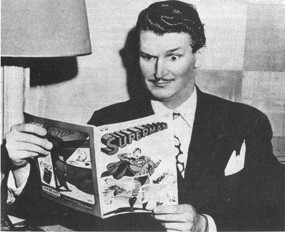 If you talk to people who grew up in old-time radio days, they fondly remember 15-minute serialized adventures of heroes like Tom Mix and the Ralston Straight-Shooters, Captain Midnight, Dick Tracy and others. But one series that lasted for most of the golden age of radio was "The Adventures of Superman". Radio was one of the first mediums outside of the comic book/graphic novel to portray Superman. Before the movies with Kirk Alyn and a little before the Max Fleischer short subjects, there was the Mutual Broadcasting System/ABC's portrayal of "The Man of Steel", done by one man.

Clayton Johnson Heermance, Jr. was born in New York city on June 18 in 1908. According to IMDB.com, many members of Clayton's family were in show business. You would think that he wanted to continue the family tradition, and he actually did by going into his father's industry, law. Starting off his professional life as a law clerk while going to Fordham university, he found Radio to be a much more lucrative career move. So he continued as a law clerk by day, and moonlit as a radio singer and actor. He would become a jack-of-all-trades in radio. Not only would he become a versatile actor and singer, he would also become the announcer for numerous shows, including "Ripley's Believe it or Not!" and "Cavalcade of America". He was also famous for acting on a radio program that would eventually go to TV, "The Goldbergs"

Collyer was a versatile actor. One of the genres of radio that he would work intensely in was the juvenile drama. He was featured as a supporting actor on such series as "The Blue Beetle" and "Terry and the Pirates", and was featured as the lead/hero on "Renfrew of the Mounted". So when the opportunity came up to play another hero, this one the immensely popular "Superman" from DC Comics, he initially turned down the part. According to multiple reports from the Superman Homepage and Radio Spirits, he did not want to be typecast. In the early 1940's, DC wanted Superman to be on the air. Collyer was coerced to be a part of the pilot broadcast, and after a little (for lack of better term) schmoozing, Collyer consented to play the dual role of Superman and Clark Kent.

In the documentary, "Look! Up In The Sky - The Amazing Story of Superman" and in research done by Radio Spirits, it was quoted that Collyer's singing expertise actually helped him with the problem of playing two different people. Of course, we know Superman and Clark Kent were one and the same person, but how to show that on the radio? Collyer decided to play Clark Kent in a high tenor voice range, to make him sound timid, jumpy and excitiable. However, when Kent was able to duck into a room to change, you could hear him struggle with the clothes, and mutter the problem to himself. He would then say, "This looks like a job FOR SUPERMAN!", dipping into the lower Bass Register for the voice of the Last Son of Krypton. The reason for the drastic voice dip was explained because Collyer wanted to have somewhere to go whenever he said his famous, "Up, Up And AWAY!" line. Collyer also played some other voices on the series, many of them the forgettable gangsters that tried to take Superman out. Collyer would go on to play Superman for about 9 years on the Mutual Broadcasting System and survived format and network changes. The original series was a 15-minute daily serial sponsored by Kellogg's cereals. Mutual later changed it to a 30-minute complete episode three times a week, then a once-a-week episode on the ABC radio network (former NBC Blue network).

As well as Collyer did as the Man of Steel on the air, he didn't want anyone to know that he was the voice of the Man of Tomorrow. He kept it a secret, and that was fine by DC Comics, according to Radio Spirits. DC Comics wanted people to believe that it was Superman himself coming in and playing himself on the airwaves. It was not until midway through the show's run that the show really took on a positive message and Collyer wanted to de-cape himself. It was in a serial that has been titled "The Unity House" series about a playground area and community house that openly accepted children of all races and creeds, but had come under fire from Metropolis-based hate groups. The series was wildly popular during its run, much to the delight of Mutual Broadcasting and the program's sponsor at the time, Kellogg's. (Yes, That Kellogg's of Battle Creek). According to a report on the Superman Homepage, the show received numerous letters for and against the unity house series. It was at this point, in 1946, that Collyer stepped out of anonymity and revealed himself in an article in Time magazine, this according to Radio Spirits research.

It should also be noted that Collyer not only voiced Superman on radio during the 1940s, but also in all 17 Fleischer Superman animated shorts produced during this period.

During Collyer's long run as Superman, he sometimes would take a few days vacation. So that was the excuse to create the element "Kryptonite" which would put Superman in a weakened state. This would give Collyer a few days to rest and relax from the daily grind of putting together a show before transcription was allowed.

In 1949, Collyer decided to leave the Superman show. But he would soon be on his way to a true calling for him. He hosted one of the early game shows on ABC TV, called "Break The Bank". He also hosted numerous other shows such as "Winner Takes All" and "Number Please". Collyer would gain praise and fame as the host of two CBS Game shows. In 1950, he hosted "Beat The Clock", a precursor to Nickelodeon's "Double Dare" and today's "Fear Factor". Collyer would invite an adult couple (engaged, friends or married) to play three "problems" to win prizes. The problems looked simple to begin with, but Collyer in a "devilish" manner would twist the problem to make it tougher, or messier. A popular stunt, which was re-created for "Game Show Marathon" in Summer of 2006, involved cutting a balloon free from the stage floor, and guiding it with a butterfly net over to a trash can that was placed on its side. As Collyer would hand the contestant their net, he would maintain a hold on the netting, and rip it out as he would walk away. The net was rigged so the contestant would only have the metal rim and handle to work with, as Bud would say, "Well, April fools, bud, that's what ya gotta work with."

Bud Collyer was a versatile game show host, as in 1956, he would host a calmer game show on CBS that would become popular in its own right. The show "To Tell The Truth" had originally been shot with Mike Wallace as the host, but Collyer took over as host and showed a genteel style of hosting. Collyer's catchphrase for the show was a simple one. "Will the real _______ please....stand up!" But one of his catchphrases was honest as he always wished contestants and panelists with a fond "God Bless You". It was no surprise that Collyer would use that line. In his spare time, he was the superintendent of a local church's Sunday School, and would help with the upkeep of the church. Collyer also gave his time to March of Dimes, doing service reads during Beat the Clock and other game shows. He also was heavily involved with local Lions Clubs.

The 1960's were a little different as Collyer slipped back into anonymity. He stopped being a game show host, but continued to work in Television, reprising one of his most famous roles. He would play "Superman" in a 1966 Filmation production of "The New Adventures of Superman". It would be old home week for Collyer in more ways than one, as his co-star from the radio days, Joan Alexander, would reprise her original radio role as Lois Lane. Collyer unfortunately passed away on September 8, 1969 due to a circulatory ailment, the same day that a new series of "To Tell The Truth", hosted by Gary Moore, was set to premiere.

Clayton "Bud" Collyer was a true Superman in the media industry. He did it all from radio announcing, to hosting, to acting. And no matter what, he would remember what was important in his life. For those reasons alone, this journalist is willing to call Clayton "Bud" Collyer a true "Superman".

Superman on the Radio Superman Homepage


This biography is Copyright © 2007 by Steve Younis. It is not to be reproduced in part or as a whole without the express permission of the author.