This image, the "reveal", is synonymous with Superman... or is it?

If, like me, you're a Superman fan, you may have sat down to watch Tobey Maguire in the "Spider-Man" movies and noticed Peter Parker running down an alley, ripping open his shirt to reveal the Spider-Man costume beneath. Upon seeing this you might have, as I did, scoffed and turned to the person next to you and said, "Superman does that, not Spider-Man!"

And you'd be right!

The first Spider-Man comic book, The Amazing Spider-Man, debuted with issue #1 in 1963 (publication date: March, 1963). However, this was not Spider-Man's first appearance as he was introduced seven months earlier on the pages of Amazing Fantasy, an anthology series, in issue #15 (publication date: August, 1962). Apparently Peter Parker has been ripping open his shirt in the comics soon after his debut.

Superman, as you know, debuted in Action Comics #1 (June 1938), twenty four years before Spider-Man, and had indeed been ripping open his shirt way before Spider-Man was even a figment of Stan Lee's imagination. 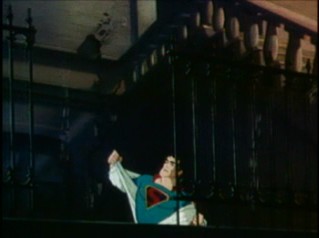 To my knowledge, in animated form, Clark Kent first ripped open his shirt to reveal his Superman costume underneath way back in the Superman Fleischer cartoon titled "Electric Earthquake" in 1942.

As an earthquake rocks Metropolis, Clark Kent exits the Daily Planet building and says to himself, "This looks like a job for Superman". He runs to a nearby stairwell and rips open his business shirt to reveal the Superman costume beneath.

However, the comic books were where the idea originated first. While previous comic books alluded to Clark Kent changing in to Superman, "Superman #1" (1939) depicted the mild-mannered reporter in an alley removing his "street-clothes" to reveal the Superman costume underneath.

Yet it isn't until "Superman #11" (July 1941), in a story written by Jerry Siegel with art by Leo Nowak, that we see the now-classic image of Clark Kent in a two-handed shirt rip, this time atop the Daily Planet building.

Since then Clark Kent has been seen doing this time and time again. The image has been drawn over and over again on the cover of Superman comics, with Action Comics #171 in 1952 being the first. 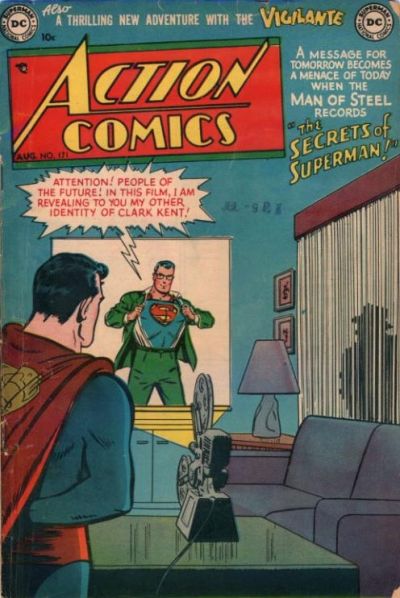 Below you will find a gallery of images I've put together. All show Clark Kent in the familiar action of opening his shirt to reveal the Superman costume. You'll see that this image has been used not only on comic book covers, but on merchandise from DVDs to Magnets, from Video Games to T-shirts, and from Toys to Scissors. There are many, many more similar examples, but these are just a cross section of images to illustrate the point.

Nearly every Superman actor has been filmed acting out this familiar scene. Below are screen shots of George Reeves in "The Adventures of Superman" TV series from the 1950s, Gerard Christopher from the "Superboy" TV series of the 1980s, Christopher Reeve from the Superman movies, Dean Cain from the "Lois & Clark" TV series of the 1990s, Tom Welling from the TV series "Smallville", Brandon Routh in 2006's "Superman Returns", and even Henry Cavill in 2017's "Justice League".

Following in the footsteps of the earlier cartoons, the "ripping open the shirt" was also used in the 1960s "The New Adventures of Superman" cartoons (see quicktime movie file) and again in "Superman: The Animated Series" (1999-2000).

You'll see this familiar image has been used for the cover of TIME magazine, has been the focus of statues and figurines, promotions and advertisements.

I have since discovered that the "shirt rip" in the Spider-man movie was intended as an homage to Superman by the director. However the average movie-goer would not know this.

So the next time a Spider-Man fan tries to tell you that the "ripping open the shirt to reveal the costume" routine originated with their friendly neighborhood arachnid, give them the URL for this article and show them that the original and best superhero, Superman, was once again ahead of the rest.