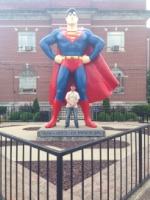 The Celebration officially begins with the Opening Ceremony and Skit that take place at the Superman Statue in the Town Square. I have a video of this, which I will have to upload at a later date.

However, after the Opening Ceremony, fans gathered together at Bob's Bowling Alley for the annual "Super Friends" Meet, Greet and Super Bowl(ing).

While I didn't bowl, I mingled with the crowd there and grabbed a word with a few friends and fellow Superman fans.

Day 2 (Saturday, June 7) is jam-packed with lots of activities, starting with the Superman Fan Baseball Game, which I'll be playing in. Looking forward to it! It's an early start, so I better get this posted and get to bed.

Day 2 of the Superman Celebration took place yesterday here in Metropolis, Illinois. The day started out bright and early with a Superman Fan Baseball Game between the Metropolis Marvels (captained by Larry Thomas Ward) and the Smallville Meteors (captained by Steve Kirk). I was lucky enough to return (after a five year absence) to play with the Metropolis team, and was sent in to bat first. With Baseball not being a national sport in Australia, I didn't do too badly. But I doubt it was my inclusion that tilted the scales, but we won in a landslide taking out the game 22-1.

We returned to Metropolis soon after for the Superman Homepage "Meet & Greet" where close to 100 people turned up for a wonderful get together. It was my first time hosting the Meet & Greet in Hardee's. The first one we held back in 2008, we were about 15 people gathering around a picnic table behind the Giant Superman Statue. In the five years since, Jamie and Ronda Kelley have done a wonderful job hosting the Meet & Greet, and I felt a bit lost without their presence there as we welcomed people in. Thankfully Jamie turned up soon after, and we were in full swing, giving away a box of DVDs and Blu-rays donated by Warner Home Video for our event. We also gave away Superman Homepage "Superman 75th Anniversary" buttons. Numbers on the back of the buttons (written in a mad rush by my new good friend Phil Spearpoint from the UK) were called out, allowing fans to come up and pick out a DVD or Blu-ray from our collection of Superman Animated Movies.

There's already so much going on here on Day 3 of the 4-day Festival. Some videos (like the Opening Skit, the Q&A with Alessandro Juliani and Michael Rosenbaum, and my one-on-one interview with Tracy Scoggins, will have to wait until a later date). 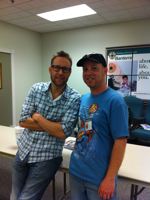 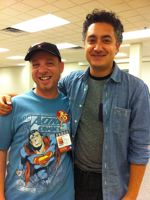 Saturday is without a doubt the biggest day of the 4-dat festival that is the Superman Celebration in Metropolis, Illinois.

This, the third day of the Celebration, is when the celebrity guests are accessible for autograph signings, Q&A panels, and photos in front of the Giant Superman Statue.

I was lucky enough not only to be able to capture a brief (but eventful) interview Tracy Scoggins (who played Cat Grant on "Lois & Clark"), but I was also able to chat at length with both Alessandro Juliani and Michael Rosenbaum.

The video of those interviews, along with the hilarious Q&A session involving Michael and Alessandro, will be posted here on the site when I get back to Australia in just over a week's time. I can't wait for you to see them!

I'll try upload other shorter videos from the final two days of the Superman Celebration when time and internet are available over the next few days.

I type this on Sunday afternoon, the final day of the Superman Celebration. Today, two big events were the Costume Contest and the Guinness World Record attempt at the most people gathered in one place dressed as Superman.

There were some amazing costumes created and worn for the annual Costume Contest. There was an amazing Solomon Grundy, a great Jack Nicholson Joker, but the crowd favorite and 1st Place winner was our own Jamie Kelley who made an impressive Jack Sparrow.

Sadly Sears just broke the record recently (all wearing new "Man of Steel" style costumes), and the Celebration (all dressed in the classic look) were unable to match that number, but they did beat their previous 2003 record, which was a World Record at that time. This year they managed to get 268 people all gathered around the Giant Superman Statue in the middle of the town square.

In all honesty, these past 4 days have been amazing. The Superman Celebration is fantastic! You have to come... But not just for the events, the celebrities, and the activities... The best part of the Superman Celebration are the fans and people you meet. These past four days I have made and renewed friendships that will last a life-time. Coming to Metropolis is like coming to a home away from home.

I wish I could show you all the videos and photos now, but I'm really pressed for time. I've got this little thing I've got to get to in New York... Holy crap! That's tomorrow night! I can't believe (God willing, flights and everything going to plan) I'll be at the World Premiere of "Man of Steel" tomorrow night!

I'm really going to try my best to keep you all updated as that all happens. Internet access permitting, I'm going to try and share the experience with you all as it happens.

Opening Ceremony of the 2013 Superman Celebration

On Thursday, June 6 the 2013 Superman Celebration officially began with the Opening Ceremony and Skit.

A video of what took place at the Superman Homepage "Meet & Greet" which was held on Friday, June 7 during the Superman Celebration in Metropolis, Illinois.

Tracy Scoggins, who played Cat Grant in the TV series "Lois & Clark" chats with Steve Younis during her time at the 2013 Superman Celebration in Metropolis, Illinois.

Steve Younis interviews Danny Kelley to ask him all about his "Man of Steel" costume which he wore during the 2013 Superman Celebration in Metropolis, Illinois.

Here is the complete video of the Q&A panel with Michael Rosenbaum and Alessandro Juliani which took place during the 2013 Superman Celebration in Metropolis, Illinois on Saturday, June 8.

Meanwhile, here is a video showing you some of the sights and sounds of the 2013 Superman Celebration, including footage of the Costume Contest Finalists and Winner (Jamie Kelley as Jack Sparrow).