Released for all of the main game systems, Justice League Heroes is very detailed and defined and a lot of fun to play. I rented it for my Playstation 2 recently and chose not to use any of the cheat codes found online. So without further a do, here is my review...

Graphics - 4 out of 5: After playing it for many hours over two whole days and beating the game, I noticed a lot of good from this game. The Snowblind engine doesn't have any noticeable glitches throughout game play. Some parts of the different environments are destructible, but for the most part, you are confined to the mapping perimeters.

I enjoyed the special effects of each Hero's powers and also explosions, villain powers, etc. Each power was visually pleasing. The Flash's superspeed looked cool because he blurred his way around as he ran and attacked. The Green Lantern's ring-emitted blasts looked equally as cool and I really liked Superman's heat vision and superbreath the best.

The other upside is the scenery. With over ten hours of game play, there is a plethora of levels and sublevels (various missions) to complete, which include some pretty tasty looking areas. I especially enjoyed the last few levels. There is this outer space dimension that our heroes are sent to, which I have deemed "The Phantom Zone".

As far as characters go, each character has their own neat animation. The details during game play are good, except for the fact that during the CG cut-ins Superman resembles a grown up Tom Welling and Wonder Woman seems a little pale and ghostly. (Happy Halloween!) Other than that, the CG cut-ins throughout the story are pretty cool, but seriously, Wonder Woman looks anorexic for an Amazon warrior!

I really liked each individual power or special ability that the characters performed. The graphics were nifty, in retrospect that heat vision looked like heat FIRE vision, which is way cooler looking than two thin beams.

Green Lantern's power ring had some cool effects such as the giant hammer and prison box. I especially enjoyed using The Flash, zipping around in a sudden blur, attacking with a flurry of punches or whirlwind spin, was a lot of fun!

Another plus is the map's display option. Basically hitting L analog stick would increase it on-screen in size from smaller to larger, to not visible. It was nice because I always got annoyed with games where you had to push select in order to bring up a map.

The downside to the graphics would be the awful bird's eye view. I felt that it made the game very awkward to control. At times, I would zoom in using the R analog stick and zoom out by pulling it back just in order to see where the enemies were coming from.

Gameplay - 4 out of 5: Although the view is craptacular, I decided not to let it bug me. This game had an arcade feel to it, which is both good and bad. The good being that you have endless opportunities to build up your powers (energy and combat ablity, plus health, recovery, and regeneration of magic or skills) and tailor your favorite superhero's powers to your liking. The bad part is that after every level, you feel like it's a dungeon game. It goes on and on seemingly with no real end. Surprises? You betcha! But you're gonna have to plow through an array of main villians before the sweet ending.

Every so often from fighting the baddies, a special boost is dropped. You collect these boosts and insert them into your skill slot. These can have a positive and negative affect on your character's defense. Every time you destroy a villain, you obtain green orbs of "experience" points. In order to increase the power of your skills, you "level" up, by filling up your level meter. That takes quite some time, so in the mean time keep fighting. Each level has its set of at least 3 main cronies. 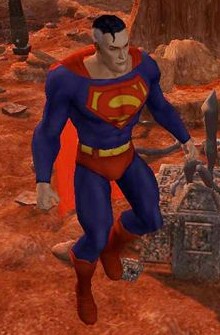 After you fight off these cronies, you end up fighting the main baddie. Once you easily dispose of him, you move onto the next chapter of the story. The downside to all of this is that your characters share the boosts. I felt I was playing an RPG for a while, but it did make sense to do it like this in order to make your character more powerful!

While collecting points from leveling up and boosts from destroying bad guys by using combo attacks, you can also pick up shields which you can use to purchase extra characters or even different costumes. The upside of this is that each costume looks pretty freaking sweet. The downside is that they come with a price.

For example, if you obtain Wally West Flash, your Mele damage increases by 20% but your health recovery diminishes by 8%. I really liked using Batman's Stealth Combat suit and Superman's black costume from when he returned from the dead. It brought back some nostalgia from the 1990's comic books. If you press the triangle button twice, you jump in the air, either flying for Superman, Green Lantern, Martian Manhunter, and Wonder Woman, but for Batman you glide through the air. The downside to flying is that you really don't fly, you merely float... or hover as you move about. But it is much quicker than running! RUN AWAY! FLEE!!

You must be careful while fighting in the middle of a crowd because you can take a lot of damage and die fairly quickly. I didn't mind dying because once you find the saved checkpoint; your character or partner immediately is revived. The more times you use your powers/skills, the quicker they are drained.

Also, you recover health quickly by dodging and blocking attacks than you do just standing there trying to fight. So word to the wise is dodge, run, hit and dodge! It is good that the game is saved at the checkpoint because if you do happen to die, and you will, it isn't so much of a challenge to play on. Thank goodness you do not have to repeat the level from the beginning.

Compared to Marvel's Ultimate Alliance, Wolverine, for instance, had to scratch away at an object such as a computer on a wall, in order for it to explode, whereas I could easily punch and damage a similar object with Superman, destroying it instantly. I felt that beating up on the aliens and villians time and time again was fun, but got very repetitive and tiring by the end. It took away from the surprise element and overall slowed the pace of the game down a bit.

Sound 3 out of 5: *SPOILERS* The game has a decent soundtrack behind it. It's not very memorable, but it does its job where needed. Every action game has to have its score of sound effects such as explosions, lasers, and punches! Superman's even got a "ZIIIIIIING" noise when he uses heat vision and a powerful "WHOOOOOOOOOSH" while emitting his super-breath. Pair that up with The Flash zipping and jump jiving all over the place and Wonder Woman's bracelets which deflect trajectories, I'd say the effects are more than decent.

More mundane details I noticed was the shrill of the bats, the richocheting of Batman's batarangs, and the sound of him gliding through the air, wings spread! Zatanna chanted some strange sounding spells as she threw magic fireballs around, which I thought was her best offense.

I did enjoy the banter between the characters, it was an interesting effect to show teamwork, but it became quite repetitive listening to J'onn J'onzz saying, "I am confident that you will gain my trust!" or something annoying like that. Believe me, after so many levels I wanted to nab Martian Manhunter myself with Wonder Woman's lasso of truth.

Overall, the voices were believable. The Flash's voice was completely goofy. Believe me, it was definitely The Flash! Superman sounded like Superman, and actually behaved like Superman, sometimes stubborn in a way ("I'm gonna do what I think is right, screw the consequences....ooops! My bad!"). I however, favored Batman's tone, voiced by none other than Hellboy, Ron Pearlman. Batman had his detective "I'm so sure of myself, this is what we're going to do" attitude down really well.

Coupled with Wonder Woman and Zatanna's spunkiness and semi-sass, it was cute in a way. But Batman kicked butt, all the way. (**SPOILERS**And on a final note, Brainiac had a very cool sounding echoed voice! Darkseid's voice, however, was a bit over the top and didn't seem intimidating enough. I didn't like it. Maybe because I didn't like the way he looked either, but oh well, pretty cool for the most part!**)

Fun Factor - 5 out of 5: I beat this game in a matter of days. It took me that long because I only played 3 hours at a time and there were quite a number of levels. I am sure if I felt like renting this again I would start over with the difficulty set on high and use cheat codes to obtain all of the powers and abilities at full maximum. Also I would get to use different characters such as Aquaman, Hawkgirl, and The Green Arrow!

The biggest question is, "Is this worthy of purchasing?" I am debating that question myself because I rented it and beat it in a matter of days. This is definitely a fun two player (or one) game that you and your buddies could team up with. It is also a game that, once you beat it, it loses its fun factor, leaving you wanting more. I suggest that any fan, gamer, or Superman fan should check Justice League Heroes out because it has great storyline, neat special effects, and better than average graphics (The XBox version looks more crisp and life-like though) and is a lot of fun to let loose with your powers to SAVE THE WORLD!