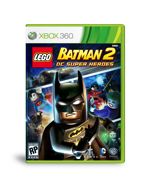 Now the game is LEGO Batman but Superman steals the show. He flies, has heat vision, super breath, x-ray vision and invulnerable to every villain and goon in the game. Now let me get into the actual game before I continue the excellent job Travelers Tales did with Superman.

Story - 4.5 out of 5: The story is a simple setup of revenge by Lex Luthor and the Joker after Lex loses the Man of the Year award to Bruce Wayne. Batman has just defeated the Joker and put him back in Arkham for the 3,000th time when Lex breaks him out. Lex decides that he really hates Bruce Wayne for winning the Man of the Year award and now decides to run for president. To do this he needs Joker Toxin to brainwash the citizens of Gotham. This leads into a 7 hour story of Batman, Robin and Superman chasing down Lex and Joker all throughout Gotham. In the story you will visit Arkham Asylum, Ace Chemicals, City Hall and most impressively the skies of Gotham in some on rails shooting sections. Along these levels you will smash objects and collect studs, find mini kits(which in turn after collecting all 10 unlocks a vehicle) and fight a whole slew of Joker goons and Lex bots. In between story missions you have the option to explore Gotham City in an open world setting. I don't want to go into details of the story, as to avoid spoilers, but it is one of my favorite comic book stories in a long time.

Sound Design - 5 out of 5: A special attention needs to be given to the sound and music of the game. Not only does the Danny Elfman Batman score from the Tim Burton Batman movies return but John Williams' Superman theme is played whenever you are flying around Gotham as Superman. I actually caught myself just flying around for 20-30 minutes because I was listening to the theme. Voice acting has also been added for the first time in any LEGO game and it was spot on. The only voice I recognized was Clancy Brown reprising his role of Lex Luthor and to hilarious effect.

Controls - 4 out of 5: The controls in the LEGO games haven't changed in the last 7 years. A jumps, X attacks, B activates switches, and Y changes characters. The only problem I had with them is when using the Flash he was just a tad too hard to control with his speed.

Superman - 5 out of 5: As I mentioned above, this game is the best Superman game of all time. I felt like Superman when playing as him. I know this is a Batman game but Superman is the star. When you are flying as Superman you will believe a LEGO can fly. Superman is the most powerful of all superheroes and it shows in the game. Nothing can hurt him... well except for Kryptonite which shows up towards the end of the game. When thugs attack him he will just brush it off like they were flies. His heat vision uses the same sound effects as the Christopher Reeve Superman movies. I never once felt that they could have done better, which is amazing since every time they make a game with Superman they mess him up. I am an avid Superman fan and I was excited that when I played this game I felt that the team behind it wanted Superman fans to play video games with him in them again. 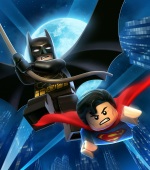 Overall - 4.5 out of 5: I was never once disappointed with any part of the story. I have beat the story and have been running around Gotham and unlocked every hero and villain and I am only at 50% completion.

I am excited that there is so much more to do and can't wait to find what else Gotham has waiting for me. It could be more citizens to save, gold bricks to collect, or it could just be DLC (Downloadable Content) that has been confirmed by Travelers Tales. The addition of the Justice League is a cool concept and I can't wait to see where they take this series in the future.

If you are a fan of the LEGO games or Superman and Batman then this game is a must buy! Just remember that when Superman the movie came out Richard Donner made you believe a man can fly, but "LEGO Batman 2: DC Super Heroes" will make you believe a LEGO block is Superman.