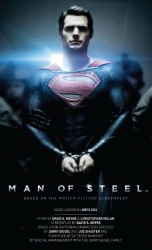 Greg Cox, is a freelance writer/editor who, for the past fifteen years, has been specializing in books based on popular movies, TV shows, comic books, and webseries. His most recent publication is "Man of Steel: The Official Movie Novelization". The Superman Homepage caught up with Greg to talk about the book, the process behind the work, and his thoughts on the movie itself.

Superman Homepage: Who approached you about writing the official novelization for "Man of Steel"? And what was your reaction when you found out that you'd be writing the book?

Greg Cox: Steve Saffel at Titan Books, who was also my editor on "The Dark Knight Rises" novelization, asked me if I was interested in doing "Man of Steel" as well. Needless to say, I was thrilled at the prospect and was soon on a plane to California to read the script and meet with the folks at Warner Bros.

SH: What was your reaction to the story when you first read the script?

Greg: Honestly, the first thing I noticed was what wasn't there: No Lex Luthor, no Jimmy Olsen, no kryptonite, no mild-mannered reporter with glasses (until the very end). It was obvious right away that this was not going to be your usual Superman movie.

SH: How long did it take you to write the book? What was the approval process like?

Greg: As I recall, I read the script in August of 2012 and, after finishing up a few other projects first, turned in the first draft of the book around Thanksgiving. Afterwards, the approval process went VERY smoothly. There were some occasional queries and minor rewrites over the next few months, but nothing major. (Unlike some other projects where I've had to write whole new scenes and endings at the last minute!)

SH: Did you have any contact with David Goyer? Did you have to regularly have meetings with someone on the production staff?

Greg: I didn't have any direct contact with David Goyer (although I bumped into Zack Snyder on the Warner Bros. lot once). Adam Forman, the Production Liaison on the movie, was my main point of access to the filmmakers themselves. He generously let me pick his brain about the movie, both in person and by email.

SH: Were you allowed any creative license with the story? Were there any areas you expanded on or added that weren't in David Goyer's script?

Greg: I generally stuck pretty close to the script. Possibly the biggest difference between the book and the movie is that I worked in lots of Kryptonian names (Jax-Ur, Nam-Ek, Black Zero, etc.) that appeared in the script but are never actually spoken aloud in the movie. And I fudged things a little where the name "Superman" is concerned. In the movie, he doesn't get that name until late into the movie and it only appears once in dialogue. But, of course, I needed to be able to write sentences like "Superman swooped down from the sky and tackled Zod," so I had to introduce the name earlier in the book!

SH: What was your personal favorite scene in the movie/novel? Which part did you have the most fun writing?

Greg: My favorite scene in the movie is probably the part where Superman first reveals himself at the army base, hovering in the sky above the troops. That's just an awesome shot that really captures the "First Contact" feel of the movie. In the book, I had fun writing all the sci-fi adventure scenes of Krypton, even though it was a challenge to visualize some of those sequences.

SH: Was there anything in particular about the script you weren't too thrilled with or had concerns about?

Greg: Reading the script, I was a little daunted by all the real-life military hardware mentioned. I knew I was going to have to do a bit of homework to get that right. Ditto for the crab-fishing scenes! (I actually read a "Deadliest Catch" tie-in book for research purposes!)

SH: Some fans are still a little confused about the whole Codex thing, wondering about the skull. Who's skull is it? Where did it come from? What's with the writing etched into it? Can you shed any light on this topic?

Greg: The fact that the Codex took the form of a skull was not mentioned in the script. That was something Adam mentioned to me while I was visiting Warner Bros. I don't recall any long discussions on the topic - I was too busy taking copious notes on as many visual effects as possible - but I assumed the skull had some symbolic/historical significance and had been retrofitted to serve as the Codex. Or maybe it had been grown that way?

All of the Kryptonian technology and architecture was very bio-organic in nature, something I tried to stress by using biological terminology throughout the book: arteries, cavities, ribs, etc.

SH: Did you get to see any footage, concept art or still photography to help you in being able to describe visual representations of the characters, places and scenery? How did you approach writing a description for things and places on Krypton?

Greg: There was a gallery on the Warner Bros. lot, behind a locked door, that featured a display of pre-production paintings, props, and costumes. I was allowed a couple hours to examine the display, scribble plenty of notes on a yellow legal pad, and commit as much of as I could to memory. Alas, I'm not much of an artist, so I'm not sure how much my crude sketches helped in the long run! Later on, once I was back at my office in Pennsylvania, I would occasionally fire off an email if I was having trouble visualizing a scene.

SH: The interview scene with Lois Lane on the army base, where she asks him what the "S" stands for, in your novel she isn't interrupted when she suggests it might stand for "Superman" as we see in the film. Was that how that scene originally played out in Goyer's script?

Greg: Yep. The joke with the static wasn't in the script, but made a nice moment in the movie. I wish I could have included it in the book, but, inevitably, there are always slight differences between the novelization and the finished movie. Basically, you're writing a 300-page description of a movie you haven't seen yet!

SH: You take great lengths to describe both Superman's lack of options at the end of his fight with Zod, and then the depth of his despair afterwards  Was this something evident in Goyer's script or something you personally felt needed expanding on?

Greg: I knew that scene was going to be controversial, so I took pains to convey just what an agonizing, gut-wrenching position Superman was in at that juncture - and just how devastated he was afterwards.

SH: There are certain scenes in the book, or expansion of scenes, that weren't included in the final cut of the movie. Having now seen the film, are there any particular segments you would have liked to see included?

Greg: Not really. There's a cute bit with Clark as a baby that I'm glad to have included in the book, but I can see why they cut it from the movie. It's a bit more slapstick than the rest of the film and might have been a jarring change of tone.

SH: Now that you've seen it, what is your impression of the film over all? Did it meet your expectations knowing the story in advance?

Greg: I was really impressed by the movie. Granted, part of my brain was distracted by comparing every scene to the version I wrote, but I thought it looked and felt unlike any SUPERMAN movie I had ever seen before - which was very exciting and interesting. (Don't get me wrong. I love the 1978 Christopher Reeve movie, too, but this felt like a whole new way to film a SUPERMAN movie.)

SH: Does it make it harder to go watch a movie knowing the full story in detail ahead of it being made? And how hard was it keeping everything you knew about it a secret for so long?

Greg: I find it usually takes me a couple of viewings before I can approach the movie just as a viewer - and stop noticing every minor discrepancy between the movie and the book! So I'm looking forward to seeing the movie again with a fresh eye.

As for the secrecy thing, I wrote my first movie novelization over ten years ago, so at this point I'm an old hand at keeping my mouth shut. But I admit there's often a sense of relief when the movie finally opens - and I can finally talk about it! "At last, I am no longer the custodian of the top-secret movie plot!"

SH: You've adapted both comic book based films as well as comic book events such as "Infinite Crisis," "52," "Countdown and Final Crisis". What would you say is the biggest difference in how you approach adapting each type of story and do you have a preference in which one you prefer to adapt?

Greg: The movie plots tend to be more streamlined and less tied into years (or decades) of complicated continuity. When novelizing a movie, you need to flesh things out to novel-length, but adapting something like "52" is exactly the opposite. You need to boil down some huge crossover saga, featuring literally dozens of characters, to a self-contained novel with its own beginning, middle, and end - and that will hopefully make sense to someone who hasn't read the previous seventy-five issues of "Justice League" or "Teen Titans"!

In short, you expand a movie script, but you condense a multipart comic-book miniseries.

SH: Any word if there'll be an audio version of the novelization?

Greg: Good question. I haven't heard anything, one way or another, but I don't believe there was an audio version of "The Dark Knight Rises" novelization.

SH: Thanks for taking the time to answer our questions.

Greg: No problem! LIke I said, it's great to be able to finally talk about the book! I've visited the Superman Homepage, but I haven't had a chance to explore it thoroughly. I'll have to remedy that situation now!

The Superman Homepage would like to thank Greg for agreeing to do this interview, and for fitting it into his busy schedule.

You can order "Man of Steel: The Official Movie Novelization" by Greg Cox from the Superman Homepage Online Store.

This interview is Copyright © 2013 by Steven Younis. It is not to be reproduced in part or as a whole without the express permission of the author.