This Superman Also Can Fly

COURAN COVE, Australia (AP) - Everything about Olympic long jumper Savante Stringfellow is super - from his tattoos to his T-shirts to his athletic ability.

"I also play basketball and football - I'm a super athlete, I guess," the flamboyant Stringfellow said at the U.S. track and field team's training camp at this resort island just outside Brisbane. 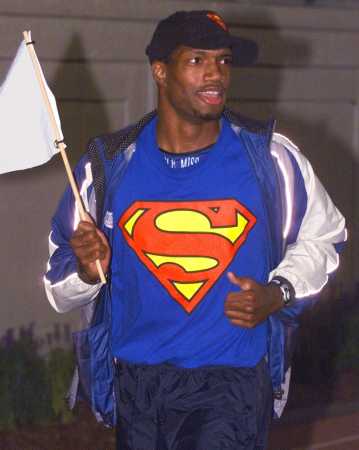 Stringfellow has been fascinated by Superman since he was a kid.

"I love all his films," said Stringfellow, who will be a senior at Mississippi this year.

The image of his favorite super hero keeps Stringfellow thinking he can do superhuman things.

"At times, I think I can fly," he said. "To me, Superman also means whatever needs to be done, I can do it. Flying, though, is my inspiration."

His aerial exploits helped Stringfellow win the United States indoor championship this year and finish fifth at the U.S. Olympic trials last month at Sacramento, Calif., with a leap of 26 feet, 41/2 inches.

Ffifth doesn't usually earn a place on the team, but Stringfellow got one when Walter Davis and Robert Howard dropped out of the long jump at the Sydney Games.

"He will respond to the pressure of the Olympics. He didn't start jumping until he was a junior in high school (Provine High in Jackson, Miss.). He didn't have a great freshman year at Mississippi, then he skyrocketed. He's ready to explode on the international scene."

He will have to explode if he hopes to even make the final at the games. The all-collegian U.S. long jump team, including Melvin Lister of Arkansas and Dwight Phillips of Arizona State, was much maligned after the trials for its relatively poor performances. Lister's winning jump of 27-33/4 inches, was the shortest at the trials in 20 years.

Stringfellow doesn't lack for confidence that he will do well at the games.

"Only three medals are going to be given out and I'm going to get one," he said. "Once I step on the runway, all the nerves will be gone. I think I can compose myself very well. The younger guys are stepping up and jumping well when they have to. The competition will bring out the best in us there.

"But Superman will reign."

At this year's Southeastern Conference Championships, he wanted to wear a Superman T-shirt during the competition at LSU, but was denied by a meet official. "He thought that would be taunting," Stringfellow said. "I didn't think so."

At the trials, fellow long jumper Erick Walder said he would make Stringfellow take off his Superman T-shirt. "After I jumped ... I took it off and offered it to him," Stringfellow said, "but he wouldn't take it."

Stringfellow's special plate on his car also is oriented toward his hero. It reads: "Superman S - jump."

His involvement with Superman has caught on with fans at his meets.

"Afterward, I throw one shirt into the crowd. I like to get the fans involved. I try to give them a show. Sometimes I yell and get responses back."

Stringfellow's act works. The fans revel in his entertaining ways.

Athletes, like Walder, are not always so forgiving. Others try to follow Stringfellow's lead. For example, Phillips likes to wear a T-shirt that says, "Game Face."

Whatever psychological ploy works, Stringfellow is in favor.

So he's sticking with Superman - and hoping he can fly farther than ever at Sydney.

"He won't get intimidated by the competition," Walker said.

How could he? He's Superman.