David Olsen is part of the organizing committee for the Superman Festival in Metropolis, Illinois. He also publishes the long-standing Superman newsletter, The SuperPlanet Chronicles.

The Superman Homepage would like to thank David for agreeing to do this interview.

This interview is Copyright © 2002 by Steven Younis. It is not to be reproduced in part or as a whole without the express permission of the author. 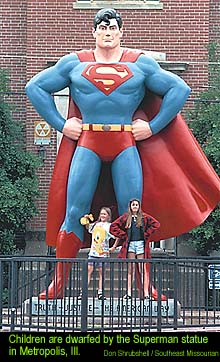 Q: Can you please tell us a little about yourself and what you do?

A: I am 32 years old and I live in Atlanta, Georgia with my wife, Michelle, and my 2 year old son, Matthew. I am Vice President of a home automations company and I have been collecting Superman memorablilia for about 9 years.

Q: What role do you play in the organization of the Superman Festival in Metropolis Illinois?

Q: How did you go about becoming part of the team who organize the Superman Festival?

A: I went to Metropolis for the first time back in 1998 and was introduced to Jim Hambrick. I got to know him during the celebration and I offered to help him. I ask him to let me handle the auction for him and he must have realized that I was serious about what I could do. He "let me run with it" and I put together, according to Jim, one of the most successful auctions he had ever had, so he allows me to handle this event every year.

Q: How long have you been a Superman fan?

A: I have been a Superman fan since I was 6 years old. When I was 8 years old, SUPERMAN THE MOVIE, came out and I was really hooked. I can still remember seeing that movie in the theater as a kid.

Q: You are Editor of the SuperPlanet Chronicles, an online Superman newsletter, can you tell us a bit about that? How it came about? How long you've been Editor?

A: In 1999, Jim Hambrick was really working on getting Alex Ross and Kerry Gammill as celebrity guests for the celebration. We wanted to get the word out about them coming and I decided to put together a newsletter and mail it out to all of the people that attended the previous year. Word spread and some people started buying subscriptions. But unfortunately, the cost of printing (it was 18 pages long) and postage was killing me. Then I met Jeff Germann and he and Jim Hambrick and I came up with the idea of putting the newsletter on the internet. Jeff is really the lifeblood of the newsletter. The name of the paper belongs to me and Jim Hambrick, I edit all of the articles for print, but Jeff is the reason that the newsletter gets out every month.

Q: What's your favorite article ever published in the SuperPlanet Chronicles?

A: I don't have a favorite. All of the articles are not really "newsworthy", but unique in the story that it tells. Some of the stories are fictional, some are just knowledgable, some are true stories about things that occurred to the reporter. But, I do have to say that all of the reporters really put together a great issue for the September 11th tragedy. I was very proud of that issue.

Q: Other than your roles in Metropolis Illinois and the SuperPlanet Chronicles, do you have any other involvement with the world of Superman?

A: No other real involvements, other than collector and huge "Smallville" fan.

Q: I believe you have a connection with Dick Dillon, famous Superman comic book artist for DC Comics? Can you tell us about that?

A: Dick Dillin was my wife's grandfather. Unfortunately, I did not get to meet him. Dick passed away in 1980, years before I met my wife. But, I am fortunate enough to have some of his original artwork and I have collected all of the comics that he drew. Dick holds the record at DC Comics for 120 consecutive issues without missing a deadline. Dick is very well known for Justice League Of America, but he also drew Superman, The Flash and did some Johnny Quest cartoons.

Q: What is the weirdest Superman item that's been auctioned off and how much did it go for?

A: In 2001, as a prank, our auctioneer John Field, auctioned off a pair of Superman boxer shorts...which were being modeled by a friend. He proceeded to drop his trousers and "model" the boxers. Everyone was roaring with laughter and I think that someone ended up bidding $10 for them. It was all in good fun.

Q: Have there ever been rabid fans who fought over an item? i.e. Feverishly outbidding one another?

A: It happens every year. In 2001, Dane Nash and I fought over a newspaper prop from Superman II. The bidding started at $20 and ended at $750. I finally got him to back down, but he got me back when we were bidding for one of George Reeves ties, which I think went for $1,000.

A: I think that it is a great website. I have always been a huge fan and somewhat envious of the fantastic artwork and web design. Thanks for asking me to be a part of it today.

Thanks for allowing the Superman Homepage to interview you!