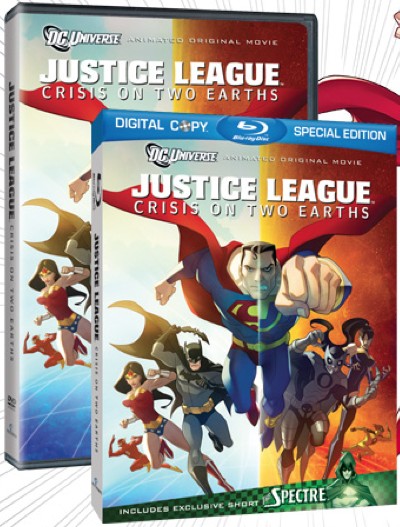 To save our world and all those like it, SUPERMAN, BATMAN and their caped colleagues must go toe-to-toe with their evil mirror images in Justice League: Crisis on Two Earths, the seventh entry in the successful ongoing series of DC UNIVERSE Animated Original PG-13 Movies coming February 23, 2010 from Warner Premiere, DC Comics and Warner Bros. Animation. The full-length animated film will be distributed by Warner Home Video as a Special Edition 2-disc version on DVD and Blu-RayTM Hi-Def for $24.98 (SRP) and $29.99 (SRP), respectively, as well as single disc DVD for $19.98 (SRP). The film will also be available On Demand and Download.

In Justice League: Crisis on Two Earths, a "good" LEX LUTHOR arrives from an alternate universe to recruit the JUSTICE LEAGUE to help save his Earth from the Crime Syndicate, a gang of villainous characters with virtually identical super powers to the JUSTICE LEAGUE. What ensues is the ultimate battle of good versus evil in a war that threatens both planets and, through a diabolical plan launched by OWLMAN, puts the balance of all existence in peril.

The official website for this DVD has also been launched at www.justiceleaguecrisis.com, although it currently contains nothing but the video trailer.