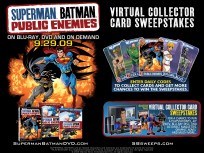 A few days ago we reported on the news that the "Superman/Batman: Public Enemies" Sweepstakes had been launched. Today we have the official Press Release sent out by Warner Bros.

Fans can further immerse themselves in the multitude of DC Super Heroes and villains in the next DC Universe Animated Original Movie by participating in the Superman/Batman: Public Enemies Virtual Collector Card Sweepstakes. Starting September 11, 2009, the sweepstakes involves an active search for special codes on the film's Facebook and MySpace pages, Twitter updates and the film's official website, and entrants will be eligible to win a Sony PlayStation3, a 40-inch LCD HDTV, and a Blu-ray or DVD of the film, which will be released by Warner Home Video on Sept. 29, 2009.

Sweepstakes entry begins through an application on the Superman/Batman: Public Enemies Facebook fan page and the search extends through the film's official website, MySpace page and Twitter updates. Entrants can find daily codes to be entered into the Facebook application. With each code, the entrant will be rewarded with one additional sweepstakes entry and two virtual collector cards. Entrants will unlock gateways to greater prizes - exclusive content from the film, including video clips, wallpaper and images - by completing groups of card collections.

The Superman/Batman: Public Enemies Virtual Collector Card Sweepstakes features an unique interactive component amongst fans that allows entrants to trade virtual cards so they can help each other complete their collection sets and continue to advance toward unlocking the exclusive content.

Fans will appreciate the added bonus of artistic detail within the virtual collector cards themselves as each depicts a character from the 100+ DC Super Heroes and villains that appear in the film. From Superman and Batman to Captain Atom and Power Girl to Solomon Grundy, Starfire and Metallo, the Collectors Cards include 33 different characters displayed across 40 individual, beautifully-designed virtual cards. An additional 10 bonus cards depict classic graphic novel images from the DC Comics archives.

No purchase necessary to enter. A purchase will not improve your chances of winning.

Sweepstakes begins at 12:00:01 AM Eastern Time ("ET") on September 8, 2009 and ends at 11:59:59 PM ET on October 13, 2009. Sweepstakes is open to individuals who i) are legal residents of the 50 United States or the District of Columbia who at time of entry reside within the 50 United States or the District of Columbia; ii) are age 13 or older; and iii) are registered users of Facebook, except for residents of Maine under 18, who are not eligible. Limit: one prize per person/household. Void where prohibited. For complete Official Rules, with prize descriptions and odds disclosure, visit http://apps.facebook.com/supermanbatman/. Sponsor: Silicon Ridge, Inc. 3232 Cowper Street, Palo Alto, CA 94306.