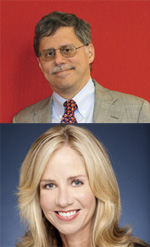 Following the announcement that Warner Bros. would be forming a new company called DC Entertainment, DC's "The Source" published a personal letter from both Paul Levitz and Diane Nelson about the change and how it would affect their personal roles...

It will come as no surprise to anyone who's heard me answer a comic convention request, "When are you going to do more Legion stories?" that I'm going to step away from my executive desk in coming months to resume my writing career, in comics and hopefully other forms as well. One of the lessons I learned from my many great teachers, from Frank McCourt through Joe Orlando and Jenette Kahn, is that creative work is more enduring than executive acts, and I look forward to adding to the stories I've told. Expect to see my byline at DC, as it has appeared for almost 37 years, adding what I can to a mythology and company that has my enduring affection, and expect to see me around the world of comics, which I hope never to leave. I already hear Karen and Dan sharpening their blue pencils with glee, waiting for my first pages.

You can read Paul Levitz's complete letter at "The Source".

DC Entertainment's mission is to deeply integrate the DC brand and characters into all of Warner Bros.' creative production and distribution businesses, while maintaining the integrity of the properties and DC's longstanding commitment to and respect for writers, creators and artists. The founding of DC Entertainment is about Warner Bros. taking DC to the next level and giving DC an even greater degree of focus and prioritization in all the businesses in which we operate - films, television, home entertainment, digital, consumer products and videogames.

You can read Diane Nelson's complete letter at "The Source".

Also, Newsarama caught up with both Paul Levitz and Diane Nelson and asked Diane specifically about Superman and Wonder Woman movies...

Nelson said that among the things that will be focused upon will be how DC's characters can be utilized in feature films, acknowledging that among them will be Superman and Wonder Woman.

"Of course they're priorities," she said. "But we'll equally be looking at other properties and stories that can be incubated."

You can read the complete interview at Newsarama.com.