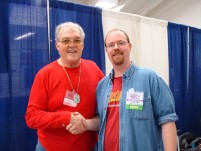 I sat down (or rather stood with) Jack O'Halloran at WonderCon last weekend. Even though he convincingly portrayed a genocidal maniac in Superman: The Movie and Superman II, he's a really nice guy.

What did you think of the Donner Cut of Superman II?

I like the fact that they took the campiness out. The quality of shot were better. He's a much better director and it shows night and day. The whole structure of the shots were better. The true villains were much more revealed in Donner's cut.

I much preferred the final fight with the villains in the Donner Cut.

Yeah, and I think that Donner just did that. It showed three against one in a proper manner. He's just a better director.

Do you have any thoughts about the next movies that are in the works?

I hope they do better than they did the last time. (In Superman Returns) I think they overdid the CGI. They had a lot of great talent that they didn't properly use. There weren't enough minutes on the screen for Frank Langella. And with Kevin Spacey, if you want to try to outdo Hackman, you at least have to give him something to do. I just thought it was kind of unfair how some of the talent was wasted on that movie.

Are you aware of Non's role in the current comic books?

Yeah, Dick Donner told me (laughs). I haven't seen them. Did they do the thing where he was a scientist on Krypton? I'm supposed to go by the office and pick up copies, but I haven't yet.

Yeah, you know we talked to them a couple of times and I thought we were going to do something once. We even came up with plotlines to help them out and bring all three of us on there. I never heard from them about it. Mark (McClure)'s been on there. Maggie's (Margot Kidder) been on there. I guess the only two who haven't been on there are Sarah (Douglas) and I. Terrence (Stamp) is doing a voice. So I don't know what's going on there. I've never actually met the Smallville people face to face, but we talked on the phone a few times.

I gave them a plotline for all three of us to be on there. We'd be coming out of jail as criminals, but without powers, searching for Lex Luthor to give us our powers back. I thought it would have been a very cool show and worked very well. We just never heard back from them.

Since I'm friends with you on Facebook, I see that you're involved with a lot of causes. Are there any you'd like me to pass on to the fans?