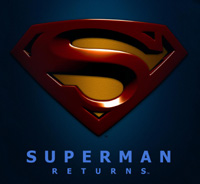 IGN managed to grab a sneak preview of the up-coming "Superman Returns: The VideoGame" at the Tiburon booth at the X05 game convention in Amsterdam. Here's part of their report...

The game world of the city of Metropolis which will span 80 square miles populated with over 10,000 buildings. Tiburon is attempting to create a seamless environment for players to roam around in, defending Metropolis' citizens or finding hidden times throughout the city.

Superman Return's gameplay will involve developing Superman's abilities and protecting the citizens of Metropolis. Unlike other games, Superman will start out with all of his abilities available. They include super speed, heat vision, frost breath, x-ray vision, super breath, and of course flying and super strength. You'll need to augment these skills as the game progresses and learn how to use them in conjunction with one another. For instance, you'll eventually be able to freeze objects with frost breath, shatter them with your strength, then melt the ice to put out a fire.

Since Superman is for the most part invincible the game will fail you at a mission because you let the city get destroyed, not yourself. Superman will also have a stamina bar that limits the amount of moves he can do all at once though it replenishes when out of action like a Halo shield. The actual Superman model will be comprised of 15,000 polygons and feature muscle deformation and cloth physics for his cape.

In addition to his special superpowers, Superman will be able to manipulate and fly seamlessly around in his environment. He'll be able to pick up and toss cars and oil tankers, prop up falling buildings, and fly to the ground at 300 miles per hour and continue running at that speed. Naturally, Superman will not receive small measure tasks like stopping a burglary, but will deal more with large scale fires and super villains that threaten the entire city. Metropolis itself is built on many levels. Some of the concept art they showed us highlighted perilously high skyscrapers, elevated train tracks and walkways, titanic highway overpasses, and heavily industrial sections. All of these different areas were designed to keep the action switching around so it didn't always take place on the ground level.

They finally turned on a gameplay demo of the game where Superman was flying around a small section of the city. Surrounded by some gigantic skyscrapers, we were shown his super speed ability which sent him flying forward as the edges of the screen blurred, xray vision which let him peer inside buildings, a brief glimpse of his frost breath which turned a car to an icicle, his super breath which blew a car over, and his heat vision which he used to blast a gigantic Metallo who was terrorizing the city.