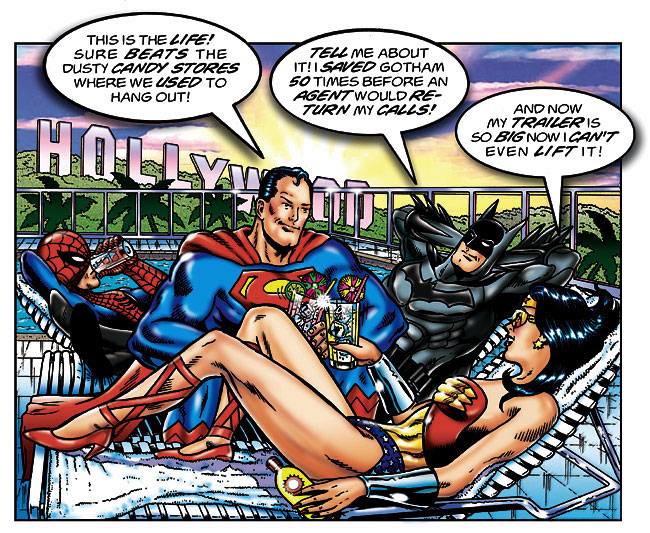 A. O. Scott, a writer for the New York Times has written an article exploring comic book superheroes and their place in Hollywood. Here's an excerpt from the article...

Further evidence of the rivalry between movie stars and superheroes can be found in the early pages of "Men of Tomorrow" (2004), Gerard Jones's fast-paced and informative retelling of the origins of modern comic-book culture. In an opening set-up, from which the rest of the book flashes back, Jerry Siegel, one of the Cleveland teenagers who dreamed up Superman back in the Great Depression, is reading an article in the trades about the impending movie based on his creation and contemplating another skirmish in his endless campaign for recognition and compensation. The anecdote, which takes place sometime in the mid-1970's, dramatizes both Siegel's bitter exile from the comic-book world he had helped to invent and also the multimedia juggernaut that comic books had become. Warner Brothers, having recently acquired National Periodical Publications, parent of DC Comics, was gearing up for an exercise in what a later era would call synergy, and it had big plans for "Superman." There was a 300-page script by Mario Puzo and candidates to play the Man of Steel reportedly included Clint Eastwood, Paul Newman and Dustin Hoffman.

Those names, appearing on the first page of Mr. Jones's prologue, are at best incidental to his tale, but they do catch the reader's eye, providing a passing glimpse of a strange alternative history of Hollywood. Needless to say, none of those stars got the part. And to picture any one of them in tights and a cape, leaping tall buildings in a single bound, requires superhuman powers of imagination and results in images of nearly monstrous absurdity. Could we really have had a squinting, sneering Superman ("Do you feel lucky? Well do you, Lex Luthor"), or a scowling, nervous, diminutive Clark Kent ("Ms. Lane, are you trying to seduce me?")? And what about Al Pacino, another hot movie star of the 70's whose name pops up later on?

The very idea - hoo-wah! - seems as much a violation of the laws of nature as X-ray vision, spider sense in humans or unassisted flight. There may have been specific reasons none of these actors wound up attached to the final project, but their collective nonparticipation established a rule that has rarely been flouted. By the time the first "Superman" picture was cast, the title role went to Christopher Reeve, who had the chiseled features, the height and the hint of mischievous self-spoofing that made him seem, at the time and in retrospect, perfect for it. What he did not have was a well-known name or a recognizable image, and that was also perfect. Reeve, an impeccably trained, reasonably talented actor, did interesting work in other pictures, but his stardom was delimited, even as it was enabled, by his most famous character. And like the artists, inkers and writers who brought Superman to life in his original, pulpy incarnation, Mr. Reeve did not own the character, but rather inhabited him, gracefully and with good humor, for as long as the franchise lasted.

Read the complete "Heroes vs. Stars: Revenge of the Nerds" article at the NYTimes.com website, and be sure to also check out the Audio Slide Show where the writer discusses his views on Superhero Movies.