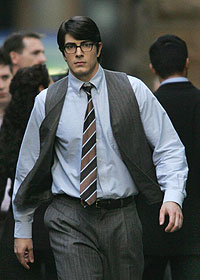 On April 16th I once again made my way towards Wynyard Station in Sydney. There was no remaining evidence of the previous week's shoot. I actually walked out from under the green awning that had been used as the front of the Metropolis General Hospital.

I soon found that new barracades had been set up further up York Street. I discovered they were filming three new scenes (explained below in the Spoilers section of this report).

Here are some of the highlights of the day, including information I received from speaking with both Bryan Singer and Mike Dougherty (co-writer of the script).

Dingo not Krypto
Mike Dougherty walked up with his dog towards where we were standing. I asked him if the dog was Krypto, the production mascot we'd heard about in previous reports. He said the dog's name of "Dingo" (named after the native wild Australian dog), but had bought the dog because he did indeed look like Krypto.

Superman Homepage Used For Research
Introducing myself to Mike, he exclaimed that he was a big fan of the Superman Homepage website, and mentioned that they'd used this site as research material for the movie(!!!!).

Mike Dougherty's iPod
We'd all heard the classic John Williams "Superman" score being played over the loud speaker on set during rehearsals and takes. Mike came over to talk to me again in between takes, asking me if I'd heard the music. He revealed his iPod, telling me he'd downloaded the theme and was playing it over the loud speaker for a bit of fun (and I guess to build the mood on set).

A Man of the Fans
One thing that I have to say about Bryan Singer is that he's definitely a man in touch with the fans. During the course of the day, between shoots and even in between takes, Bryan Singer made his way over to the crowd of fans waiting behind the barracades... not once, but 4 or 5 times! During these visits Bryan joked with young kids, signed autographs, and posed with fans for photos. I was directly in front of him, and although there were other media and journalists directly behind and beside me, nobody else spoke a word. So I jumped right in and started asking him questions about the movie.

Kryptonite
I asked Bryan if Kryptonite would be used in the movie... He nodded hesitantly, as he stumbled to find an answer that wouldn't reveal too much, before saying, "Wait and see".

Marlon Brando
I asked Bryan about them using footage of Marlon Brando as Jor-El. Again he nodded, and fought to find the right words, before again saying, "You'll have to wait and see".

John Williams Music
When I asked Bryan about whether or not they'd be using the John Williams "Superman" music, he said, "Oh yeah!" and indicated that it'd definitely be used, saying, "You can't top that".

Fortress of Solitude
Again, with giving a definite answer, Bryan indicated that the Fortress of Solitude's design would be the same as that seen in the previous movies, saying that the whole film was staying quite true to the original film's designs.

The "S" on the Costume
I mentioned to Bryan that I'd seen the silver "S" emblem they'd released online and asked him if the costume's "S" would be similar but not as 3D. He indicated that it would look similar, would obviously be red and yellow in color, but that it would have a slight embossed/bevelled edge to the "S". It was indicated to me from someone who claimed to have spoken to one of the crew, that an official photo of Brandon as Superman would be released later this week... I guess we'll have to wait and see.

DVD/Video Diary
I met the guys who are shooting the material for the online Video Diaries. They're also the guys who will be putting together the DVD for "Superman Returns". They followed Bryan all around the set, interviewed some of the fans (myself included), asking us what we thought of Brandon Routh.

Brandon looks fantastic! The photos don't do him justice. He looks like Clark Kent... the Chris Reeve Clark Kent. He has a grace about him when you see him walking around.

Blue Eyes
For those who were concerned about him having brown eyes. They have indeed placed bright blue contact lenses in his eyes for the movie.

The Hair
Fans have commented on Routh's hair being too long or "out dated", it was mentioned by someone on the crew that that is something that is noted in the movie... a plot point, if you will... Whether that means he gets it cut or if it's explained, is something we'll have to wait to find out.

Body Doubles
I spotted two men who were obviously there as either stunt men or body doubles or just stand-ins for Brandon Routh. Quite a few fans mistook these guys for the real thing, especially when one of them walked through the crowd on his way to lunch.

Warning! The above information is quite "spoilery" in itself, but the information below gives details of scenes that some fans may not wish to read.

Okay, the first scene being show on Saturday April 16th appeared to be a scene in the movie where a group of people are gathered on the street outside an Electronics store, watching some event unfold on the TV screens displayed in the window. Clark walks past the screens, sees the emergency unfolding on TV, and runs off, around the next street corner. The TV screens were showing nothing but a green screen, obviously allowing them to digitally place whatever footage they require there later on. It was speculated that the emergency shown on TV would be the Virgin Galactic space craft in jeapordy (the scene with the cameo appearance by Sir Richard Branson).

The next scene they shot was a continuation of the previous scene, showing Clark running into an alley, making sure nobody is looking, and then ripping open his shirt. BUT, there's a catch, and I know this because I later saw the scene, as recorded by the cameras, when standing behind the editing equipment/computer later in the day, and it was confirmed from someone else on the crew. When Clark rips open his shirt, there's no Superman costume beneath... just a white T-shirt. He's either forgotten to wear the costume, or (more likely) has only just returned to earth and (not having worn his Superman costume for the past 4 or 5 years) has not yet put the costume on beneath his Clark Kent clothes.

The third and final scene shot on the day was a scene that bridged the above two scenes. Clark, having seen the emergency on the TV screens, runs around the corner, spots a telephone booth, (I think he sees it's occupied by someone making a phone call, I couldn't really tell), runs by it, and crosses the street (ready to then run into the alley as described above).

All in all it was a great day! It easily topped the previous week's experience! And (if possible) I'm even more excited now about this movie.