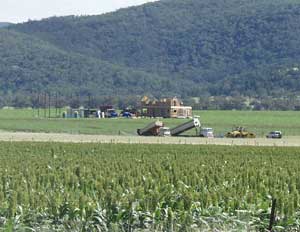 The Northern Daily Leader (a Tamworth newspaper) reports that sets for the new Superman movie are being made in the north-west New South Wales town of Breeza in Australia. Here's an excerpt from the article...

SUPERMAN is coming to the north-west, complete with a small army of Hollywood extras.

A property near Breeza is being transformed into the Kansas family farm where the young Clark Kent grew up before becoming the Man of Steel.

While filming of the Warner Bros Pictures movie is not expected to start until March, the wheels are already in motion with construction underway of a complete Kent farm replica, 45km from Tamworth.

The shell is beginning to take shape on the Breeza Plains property as builders and carpenters work around the clock to get the site ready for its scheduled March 3 production date.

Earlier last week, trucks and other vehicles were seen delivering equipment, tanks and sets to the site, which is dotted with shipping containers being used by workers to store tools and sets.

Additional sets, which have been built at Fox Studios in Sydney, are expected to arrive at the site in the coming weeks, including a number of chimney stacks for the farmhouse and a Kansas-style barn to be built near the house.

Speaking from Los Angeles Warner Bros Pictures publicity spokesman Mark Cohen confirmed the Breeza property would be used to film some of the first scenes of the new Superman movie.

"It's early days yet, but I can say a property in that area is being transformed into the Kent farm for the film," Mark said.

"Production isn't due to start on the film for another two months, but the sets have already been built and are awaiting to be erected on the site.

"We chose the Breeza Plains area because of its picturesque location."

A landscaper, who said she had been employed as a gardener on the film, arrived from Queensland last Tuesday and will work at the site until production begins in March.

Read the complete report at the Northern Daily Leader website.