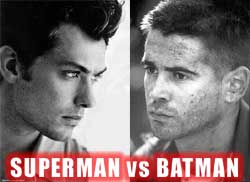 Yesterday we reported on a rumor posted on the Aint It Cool News website that Jude Law had been cast as Superman and that Colin Farrel had been cast as Batman in the up-coming "Batman vs Superman" movie to be directed by Wolfgang Peterson.

Warner Bros. sent out an official email yesterday to alert fans to the fact that no casting had officially happened as yet. Here is how it was stated in their email...

"The roles have NOT been cast yet". "They are still seeing other actors in casting next week. Jude Law and Colin Farrell are very definitely in the running but nothing has been locked yet."

Stay tuned to the Superman Homepage for more news surrounding developments on "Batman vs Superman".