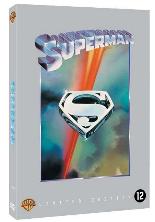 The DVD Breakdown website reports that a Region 2 version of the Special Edition of "Superman: The Movie" on DVD has finally been released. Here's an excerpt from their report...

Following a long period of seemingly endless delays and numerous Region 1 and Region 4 imports acquired by impatient European DVD lovers dying for the Man of Steel on a set of silver platters, the original Superman movies are finally streeting this week for Region 2 DVD outside the UK. To atone for the long wait many have been made to suffer, the outstanding Special Edition of the original film is being released in unique Limited Edition packaging similar to last year's limited release of 2001: A Space Odyssey, and likewise includes the full soundtrack CD. The box cover carries an appropriately tacky ribbed hologram showing off the silver-embossed S-symbol logo.

On the downside, the fourth - and worst - film in the Salkind-produced Superman series is not included in this release, nor are the three films available as a boxed set, which some fans will certainly find disappointing. All three DVD releases are identical to last year's versions that appeared for Region 1 and 4. Superman: The Movie comes as a double-sided DVD-18, with the restored director's cut (featuring some 8 minutes of previously deleted footage) looking and sounding its absolute best ever - though some purists have found fault with the elaborately redesigned audio mix. There's a great audio commentary from director Richard Donner and screenwriter Tom Mankiewicz, and John Williams' fantastic movie score is presented separately in an isolated music track. (As mentioned above, this release also has the great addition of the full soundtrack CD as a surprise inclusion not mentioned on the packaging!) Side 2 of this double-sided disc presents three marvelously in-depth half-hour documentaries, covering everything from the movie's troubled production history to its amazing special effects. Other great additions include deleted scenes, unused music cues, lots of great screen tests and much, much more.

For more information visit the DVD Breakdown website or to purchase a copy visit the Ro-Direct website.