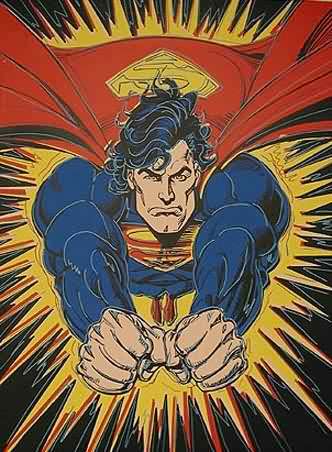 Possessing the ability to entertain, educate, and enlighten us, the motion picture has proven the most influential art form of the twentieth century. Fine Arts Brokerage is proud to present a vast collection of movie memorabilia, spanning the entire history of motion pictures. Items from Hollywood's golden era as well as today's blockbusters are represented, including an incredible selection of Super Hero props and costumes. The Hollywood Collection includes props, scripts, wardrobe, and personal, one-of-a-kind items belonging to Hollywood's brightest stars.

Amongst the Super Hero items up for auction is Steve Kaufman's "Superman" (Lot #:10001609), a silk screen on canvas illustration of Superman flying. Signed on reverse by S. Kaufman. The piece measures 40" x 30" and is unframed.

Listed below are all the Merchandise & Miscellaneous News items archived for 2001.