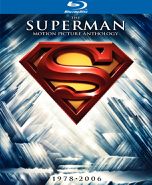 I didn't actually own a Blu-ray player before receiving "The Superman Motion Picture Anthology" Blu-ray collection direct from Warner Home Video, so I went out and bought one specifically to watch these discs. While I had purchased previous Blu-ray releases of the Superman movies knowing that one day I'd get around to buying a player, the arrival of this collection forced my hand. The promise of all that HD Superman goodness on this 8-disc collection was just too tempting to pass up. Plus, (as I've expressed elsewhere on this website), the fact that I'd received it ahead of its official release, meant that I had the opportunity to be one of the first people to watch the "Return to Krypton" deleted sequence from "Superman Returns".

I'm no expert on High Definition picture quality or Surround Sound technical aspects, so if you've come to this review expecting technical ratings on video and audio quality then you'll need to look elsewhere. I'm coming at this review as a Superman fan. My analysis is based on the content, the extras and bonus material, and why this collection deserves your hard earned dollars.

Admittedly, having seen all the films in this collection, my main concern was with the Bonus Material. So, after checking out the "Return to Krypton" scene from the "Superman Returns" disc (disc #7 in this collection), the next disc I inserted into my newly-purchased Blu-ray player was Disc 8 - Bonus Disc. However, for the sake of this review, let me go through the discs from 1 to 8 and compare the content on this Blu-ray collection to what you may already have on DVD from other releases (specifically the 14 disc "Superman Ultimate Collector's Edition" (SUCE)).

This is the original 1978 film as seen in theatres... but in glorious High Definition with 5.1 surround sound. It's amazing to watch the movie, which I've seen countless times, in such amazing quality. Really brings new life to this classic film.

The Commentary track is the same Pierre Spengler/Ilya Salkind commentary heard in the SUCE DVD release. The TV spot, teaser trailer and theatrical trailer are also material seen before.

Released in 2000/2001, this expanded edition is the same extended version of "Superman: The Movie" as seen on Disc 2 of the SUCE DVD collection, but obviously it's in High Definition. This Disc also contains the excellent behind-the-scenes documentaries "Taking Flight: The Development of Superman," "Making Superman: Filming the Legend," and "The Magic Behind the Cape," which were narrated by Marc McClure. Additionally there are Restored Scenes, Screen Tests, an Audio-Only Bonus and additional cues. These are the same bonus items which were included on Disc 3 of the SUCE DVD collection, but it's excellent having them on the one disc (due to Blu-ray discs being able to contain more content than DVD discs).

The third disc of this Blu-ray collection contains the original theatre released version of "Superman II", but again I can't stipulate enough how amazing it is to see these beloved films in HD quality picture and sound.

Additional material on this disc are the commentary by Spengler and Salkind, the "Making of" documentary, additional scenes, and theatrical trailer all seen on Discs 5 and 7 of the SUCE DVD collection. Also included are the "First Flight: The Fleischer Superman Series" featurette (seen on Disc 7 of SUCE) and the first nine Fleischer Superman cartoons (which were included on Disc 4 of the SUCE DVDs).

Thanks to Michael Thau and the push from fans everywhere, Richard Donner's original version for the sequel to "Superman: The Movie" saw release in 2006. This Blu-ray release of the film includes commentary by Donner and the late, great Tom Mankiewicz, with an introduction by Richard Donner. Also included are additional/deleted scenes, all of which were included on Disc 6 of the SUCE DVDs.

The featurette "Superman II: Restoring the Vision" is included on this disc. This bonus documentary was not included in the SUCE DVD collection, but was on the 2006 DVD releases of the Donner Cut of "Superman II". Also on this disc are the eight remaining Fleischer/Famous Studios Superman cartoons (which were on Disc 7 of the SUCE DVD collection).

The 1983 film starring Christopher Reeve with Richard Pryor wasn't the worst of the original films, but it did deviate from what made the first two films so successful. Nevertheless, everyone always remembers the junkyard scene with fondness.

The contents of this disc are the same as Disc 8 in the SUCE DVD collection. However the picture and sound quality are amazing. The detail and vivid colors for this Blu-ray release will please even the harshest critic.

The fourth and final Christopher Reeve Superman film, "Superman IV," released in 1987 doesn't hold up well on Blu-ray. The special effects are nowhere near as good as the first few films, and seeing them in High Definition doesn't do them any favors. However the wires and other problems encountered on the 2006 Deluxe Edition DVD release weren't evident to me watching this Blu-ray release. The picture quality is outstanding. However the audio is only stereo, and not 5.1 surround sound like every other film offered in this collection.

This disc contains the same commentary, deleted scenes and theatrical trailer that are included on Disc 9 of the SUCE collection. However the Blu-ray disc also contains the vintage TV special "Superman's 50th Anniversary: A Celebration of the Man of Steel" which was on Disc 7 of the SUCE collection, and was also included in the second disc of the Two-Disc Special Edition DVD release of "Superman II" released in 2006.

Next to the eighth and final disc in this collection, the "Superman Returns" disc contains more bonus material than any of the others.

Whatever you think of the movie itself, the cinematic quality of this film looks stunning in High Definition. The sound quality is superb.

Additional material contained on this disc are as follows: There's the "Requiem for Krypton: Making 'Superman Returns" 173-minute documentary in seven segments, the "Resurrecting Jor-El" featurette, additional scenes (including the above mentioned "Return to Krypton" segment that runs for 5 minutes and 23 seconds), theatrical trailers, and Bryan Singer's Video Journals.

All this material, other than the never-before-seen "Return to Krypton" sequence, were previously released on Discs 11 and 14 of the SUCE DVD collection.

The bonus disc in this Blu-ray collection is packed full of wonderful material.

The 1958 TV Pilot for the never-made "The Adventures of Superpup" series is included on this disc. This was also in the SUCE DVD collection.

The design of the packaging is quite eye-catching. The 3D "S" symbol that actually lifts as part of the top of the case is very creative. The discs are housed in a lift out, fold out holder that can be tight to get in and out of the case.

My only real concern with the packaging design is the slip that is stuck onto the box by means of a small dab of clear, sticky material. I'm guessing it's not designed to be kept, but I quite like having the details of what's on each disc in one easy to read location, rather than having to open the entire case, fold out the disc holder, to see what's what. I ended up slipping this card down the back of the packaging case to keep for future reference. It would have been nice if this information was somehow printed on the back of the box, instead of on this loose piece of card.

There's much to be impressed by. From the crystal clear picture quality of the High Definition transfers to the wonderful audio experience of hearing these films in digital surround sound, you won't be sorry that you added this 8-disc box set to your collection.

Be sure to visit the official website for this collection, which contains the promotional trailer, details on the contents of each Blu-Ray disc in the collection, links for On Demand downloads, an image gallery, downloadable wallpapers, icons and email signatures, and a Fortress of Solitude Quiz and Trivia. Visit the site at SupermanAnthology.com.