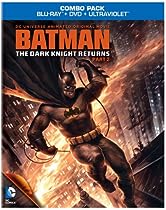 I should note upfront that at the time of writing this review I haven't actually seen "Batman: The Dark Knight Returns, Part 1". But having watched Part 2, I can honestly say that the movie stands up on its own, and you can quite easily follow along if (like me) your main interest in watching this movie is because Superman is in it. I also have never read the graphic novel this is based on, so I can't compare it to the original material. But you could say that I'm coming at this from a fresh perspective, with no preconceived ideas on what it should be or what it should look like.

When I wrote my review for "Superman vs. The Elite" animated movie I wrote that it was "probably the most adult of all the Superman-related DC Universe Animated Original Movies" I'd seen to date. Scratch that... This movie has much more violence... bloody, in-your-face, gruesome violence that pulls no punches.

My review is based on having seen the movie twice now. Firstly in the comfort of my home, watching the film on DVD. My second viewing took place at the Australian premiere of the film which took place at the Dendy Opera Quays cinema in Sydney on Monday, March 4.

I'm not sure whether the cinema showing was the Blu-ray edition or the DVD edition, but according to the press release material, the Blu-ray version runs approximately 3 minutes longer (76 minutes compared to 73 minutes). What that extra 3 minutes includes I'm not sure. Sadly the cinema screening had some positional issues, with maybe a fifth of the picture cut off on the right hand side. They did apologize about it, but it didn't spoil the viewing experience too much.

There aren't any opening credits. None whatsoever. The film starts right in and never lets up until the end.

From the perspective of a Superman fan, this film has its good and bad points. In this story, set in the 1980s (during the Cold War period) Superman is the only sanctioned superhero. He works for the American government (lead by president Ronald Reagan), fighting for the Americans in their ongoing battle with the Russians over the island of Corto Maltese.

The premise of this film is that Batman has returned after a 10-year absence. The new Gotham commissioner has issued a warrant for his arrest. The American government wants him stopped, and Superman is asked to take the appropriate measures to ensure Batman is stopped. While this is all taking place, the Joker (supposedly reformed) makes an appearance on a late night talk show, which ends in much death, and Batman wants to stop him once and for all. Cue the fighting, blood-shed, firing of bullets, evil dolls, rioting and looting, and a rising body count.

Superman walks a fine line in this movie, between being a government stooge and a concerned friend. He's not reprehensible, but he comes off as being naive. He's torn between doing his job for the government, and trying to help an old friend. Although some unsettling choices were made for Superman's appearance (which are the fault of Frank Miller who wrote/drew the original story). In one scene, Clark Kent is posturing, shirt open to reveal a bare chest, leg up on a rock, with an eagle landing on his arm. It's absurd, and deserved the laughter it raised from the audience in the cinema. It made Superman look like an obnoxious blowhard. It's a direct replication of what Miller drew in the original story, but it doesn't paint Superman in a good light. He comes off looking ridiculous.

Now without going into too much detail, as I don't want to spoil the movie for you, the film culminates in the inevitable a big fight between Superman and Batman. How can a fight between a super-powered alien and a mere human being be considered "big"? Well, as always, Batman is given a leg up. Superman's powers are drastically reduced (thanks to a nuclear bomb) and the fact that America is covered by an ash cloud that prevents any (yellow) sunlight from getting through. Add to that Batman's hi-tech battle armor (giving him super strength and a measure of invulnerability), and throw in a dose of Kryptonite, and there you have it.

Why Superman couldn't have flown above the ash cloud covering the sky and fully regenerated himself with a direct dose of yellow sunlight is never covered (conveniently). Instead he somehow absorbs energy from the flower and plants around him (???) after he crash lands back on earth after saving Corto Maltese from nuclear annihilation (a feat he's never truly praised for, even though he saved over 2 million people. Instead Batman calls him an idiot because the nuclear explosion off the east coast of America causes a total EMP blackout).

Both Superman and Batman kill people in this animated movie. Batman admits to the Joker as much, while Superman appears to kill Russian soldiers during the war over Corto Maltese. But nobody kills more people than the Joker. Like I said, it's a violent film.

The voice acting talent in this movie is pretty impressive. Michael Emerson (best known for his roles as Ben in "Lost" and Harold Finch in "Person of Interest") is almost unrecognizable as the voice of the Joker. He's deliciously evil and sounds like he really had fun with the role. Peter Weller was an interesting choice for the voice of Batman. He doesn't have that gruffness that we've come to expect from the Dark Knight. He's almost too well spoken for the role. Mark Valley ("Human Target") does an excellent job as Superman. His voice isn't as deep or commanding as you might expect, but he's got an all-America quality to his voice that works well for the role.

Oh, I should make mention that there's a nice "easter egg" blink-and-you'll-miss-it moment during the battle between Superman and Batman. At one point they crash through a wall into someone's home, and as they pass through you can catch a quick glimpse of a Christopher Reeve as Superman poster on the rear wall. It made me smile.

Superman fans will be very interested in the bonus material available on both the Blu-ray and DVD edition of "Batman: The Dark Knight Returns, Part 2", as it contains a Preview of DC Universe's next animated movie, "Superman: Unbound".

This 20 minute preview is an interesting insight into the making of "Superman: Unbound", with interviews conducted with the creative people behind the animated movie, including Mike Carlin, Bob Goodman and James Tucker, while Voice Director Andrea Romano takes us through interviews with voice cast members Matt Bomer ("White Collar") as Superman and Clark Kent, Molly Quinn ("Castle") as his cousin Supergirl, Stana Katic ("Castle") as Lois Lane, and John Noble ("Fringe") as Brainiac.

This preview was also shown at the cinema screening I attended, and at one point in the preview it's mentioned that, in the story "Superman: Unbound" is based on, Brainiac is more intelligent than Superman, at which point someone sitting two seats over from me laughingly commented, "Who isn't!?" It pissed me off big time. Yes, he was a Batman fan (he came dressed up as Scarecrow), but it really annoys me that in order to perpetuate the "Batman is a super genius" mentality, they feel the need to reduce Superman to an "all brawn, no brains" buffoon. It really, really annoys me!

"Batman: The Dark Knight Returns, Part 2" is a very good animated movie. The character designs are excellent. The president is a striking caricature of Ronald Reagan. The host of "The David Endochrine Show" is voiced by Conan O'Brien in a nice cameo. All in all it's very well put together and holds your attention the entire time.

Superman fans might not enjoy it as much as Batman fans, as the Man of Steel isn't exactly portrayed as a heroic figure. He's not a total loss, but this is a Batman movie after all, so Superman (once again) plays second fiddle to the guy in the cape and cowl.

Order the "Batman: The Dark Knight Returns, Part 2" animated movie on Blu-ray or DVD from our Online Store.