Scott Cranford, the Metropolis Illinois' official Superman and good friend of the Superman Homepage, auditioned for the role of Superman for the up-coming movie. With the role having been won by Brandon Routh, Scott sent us his report on his experience at the auditioning process. 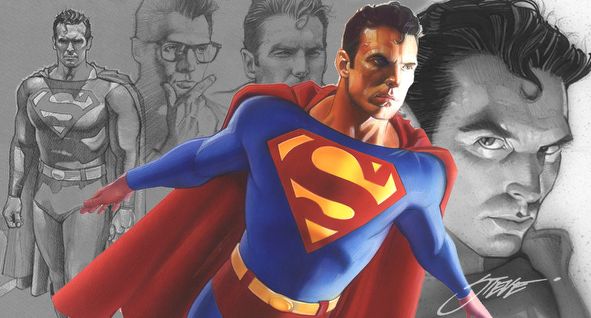 When Warner Brothers announced they were making a new big screen version of Superman, I knew this was the moment I had long been preparing for.

I had already spent many years in Hollywood pursuing a career in the Superhero entertainment business. I created many original superheroes and had written several superhero screenplays. I would also go out for any roles that had to do with the superhero genre.

Playing the Man of Steel was something I was already experienced in.

I've had the privilege of portraying Superman for the great City of Metropolis, Illinois's Superman Celebration for the last five years. My association with Superman has given me many wonderful opportunities to spread his positive message. I've worked with the West Chicago Police Department, giving crime prevention speeches for the National Night Out on Crime. This past summer, I worked with the U.S. Army's MWR Shout Out program, visiting American children stationed in Europe, whose parents are fighting in Iraq. I've battled and defeated Doomsday, Lex Luthor, Parasite and Brainiac during Superman Celebration opening ceremonies.

But would any of this mean anything when it came to the WB's big screen Superman?

I am proud of playing Superman in Metropolis and take the job seriously. However, when I won the role in 2000, I was aware it might impact my chances of being taken seriously when it came to auditioning for the big budget movie. Many of my actor friends said to leave it off my resume and don't mention it.

The bottom line was that, in this digital day and age, there is no hiding anything from anyone. If someone were to type my name into an Internet search engine, they would find plenty of information on my association with Superman and Metropolis. I was not about to take down my superhero entertainment and learning site, www.HeroicWorld.com, which receives millions of hits each month from my supportive fans. I did, however, downplay it considerably when I submitted myself to the casting office.

Two days later, eight pages of dialogue came via e-mail. There was also a note attached stating no logos or costumes (Sean Young/Catwoman) along with directions, audition time, and best wishes.

The scenes were from the original 1978 Superman: The Movie script, including the terrace scene with Lois and Superman and the scene where Clark meets the Daily Planet staff. I had two days to learn them. No problem. (I had been tipped off what the scenes would be thanks to information received at SupermanHomepage.com.)

A few days later, I entered through the front gate of one of the world's most famous movie studios. I was already familiar with the lot, as I'd worked there before on Batman Forever and Batman and Robin. My brother is also at the WB working in the Sound Department on Smallville. The Superman offices were in bungalows just below the world famous Warner Brothers water tower.

Inside it was a bustling setting that reminded me of a great metropolitan newspaper. Staff members scurried about the office purposefully. A Jimmy Olsen-esque young man in a pressed white shirt and khakis delivered something to an attractive and sassy brunette sitting behind the reception desk. She muttered something about separating union from non-union and then returned to the phone, which rang consistently.

I sat in the waiting area with two other 6'2" gentlemen with blue eyes and black dye jobs. In contrast to the McG Superman office, which looked like a mini version of the Super Museum in Metropolis, there were only subtle hints of Superman. Above were a row of clocks with different time zones -- New York City, Los Angeles, and Metropolis, my favorite city in Illinois.

I was finally called to read on camera with a friendly young casting director. She stood next to the camera and read all the parts. I was calm and relaxed. When auditioning for Superman, you've got to believe you are the best, exude confidence and be prepared for anything. I felt I did as well as I could have. Now all I could do was wait.

I knew my age was a factor. A year earlier, then-director Brett Ratner's casting agency told me flat out that I was too old for the role. George Reeves and Adam West landed the roles of Superman and Batman at my age, so I believed there was hope. In the end this generation needed a younger Superman. I can't argue with that. I am sure Brandon Routh will be great.

Trusting in a Super Future

I am grateful that I was seen and taken seriously. Had I gotten this part, it would have given me a wonderful opportunity to become a positive role model for millions of children and get the educational heroes at HeroicWorld off the ground in a big way. My challenge to make it in the superhero biz is even greater now. But I remain confident; my faith is in heroes.

My involvement with the Man of Tomorrow will not end there.

I will still try to be involved with the WB Superman movie in some way. I love Superman too much not to. I've been running full steam ahead producing a documentary film on my experience with Metropolis and the many interesting people I've met there. I was fortunate to meet and become friends with the 2002 Superman Celebration guest artist, Steve Stanley. He is near completion of a Scott Cranford/Superman portfolio submission for DC Comics.

As far as the WB's big screen Superman, great things are in the future for the World's Greatest Superhero. Director Bryan Singer and writers Michael Dougherty and Dan Harris are all extremely talented superhero enthusiasts. I trust they will make us believe a man can fly.