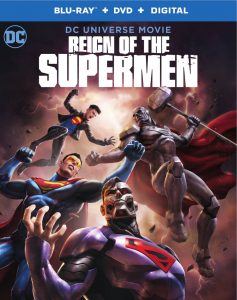 I was engrossed in the "Reign of the Supermen" story from the very first minute. While the story deviated quite considerably from the comic book story, the main beats were there... to a point.

Superboy's origin was different, and his connection to Lex Luthor was more prominent here. Steel was probably the most "real" of the four Supermen from the source material. He was very likeable from the very beginning. Hank Henshaw/Cyborg Superman was a pretty good villain. His emotional reaction to the death of his wife, and his feelings of betrayal by Superman were believable. You understood him, even though you knew he was the "bad guy".

The character who probably suffered the most in this adaptation was The Eradicator. His involvement just felt somewhat off and unclear, especially in regards to his role helping regenerate Kal-El. Probably the most dissapointing part of the film was the fact that The Eradicator's role in Superman's ultimate victory is not part of the payoff. While it's nice that Lois instead is Superman's ultimate saviour, I think this change was uneccessary in some ways. Lois is already a hero in many ways in this story, without taking The Eradicator's glory.

An improvement this animated movie made over the original comic book story is the Justice League's involvement. It deals with their part of the story in a way that feels right. Wonder Woman's role and her interactions with Lois are a highlight. As a Superman fan, the fact that none of the League are able to do face Doomsday and do what Superman ultimately does, it felt good and right. I really enjoyed that side of the story.

Clark and Lois' relationship, the secret identity, the revelation... It's all dealt with so well here. It's probably what I like most about the film.

There has been a lot said about the costume designs used in these DC Universe animated movies, with most of the characters sporting their New 52 comic book designs. While Superman does come back in the black recovery suit and the long hair after his death, I had hoped he'd take on a more classic look at the end of the film. While his costume is different, removing the high collar, the design is probably more like the "Rebirth" costume than anything else. It's an improvement, but seeing as how Superman has returned to the red trunks look in the comic books, I thought they'd make that change in these animated movie as well.

All in all, I really enjoyed "Reign of the Supermen". It was definitely a great experience, there were just one or two story beats that bothered me (as noted above). As a whole, I'd probably rate the film an 8/10.

The Special Features included on the Blu-ray release include the "Sneak Peek at the next DC Universe Movie, Justice League vs. The Fatal Five" which leaked online recently. With George Newbern returning to voice the role of Superman, along with Kevin Conroy as Batman and Susan Eisenberg as Wonder Woman, I'm looking forward to seeing this. Especially considering Warner Bros. Animation appears to be returning to the character designs from the "Justice League"/"Justice League Unlimited" animated series for this film.

The featurette "Lex Luthor: The Greatest Nemesis" is really well put together. Mike Carlin, Jon Bogdanove, director/producer Sam Liu and other discuss the evil genius that is Lex Luthor and why he's important to not just this story but the Superman mythos as a whole. It uses scenes from this movie, "The Death of Superman" and clips from classic comic book stories (especially "All-Star Superman") to call to mind the history between Superman and his arch nemesis.

Also included in the collection are the "Superman: The Animated Series" episode "Heavy Metal", and the"Justice League Unlimited" episode "Panic in the Sky", along with trailers for "Aquaman", "Shazam!" and "The Death of Superman".

The sound quality of not just the movie but all the Special Features was excellent. Watching it again at home felt very much like I was in the theater watching this as I did back when "The Death of Superman" and "Reign of the Supermen" were shown as a double feature. Pure enjoyment!