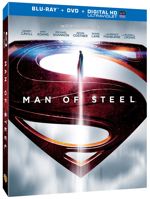 Having seen the movie at the World Premiere in New York City back in early June, and numerous times in both 3D and 2D there after, I'd been looking forward to the Blu-ray/DVD released of "Man of Steel" for a few months, not just to see the movie again, but to check out all the bonus material that fans have come to expect from home entertainment releases of their favorite films.

Having reviewed the movie itself already, this review won't feature my thoughts on the movie, but will rather focus on everything else that is included in the "Man of Steel" Blu-ray/DVD/UltraViolet Combo Pack. I don't have a 3D player or TV, so I can't comment on anything to do with that aspect of the home entertainment release of the "Man of Steel" Blu-ray 3D Combo Pack.

The menu screens for the Blu-ray discs contains the footage from the main trailer released for the movie, accompanied by the Hans Zimmer theme rather than the dialogue/audio of the trailer itself.

The artwork on all three discs (the Movie Blu-ray disc, the Special Features Blu-ray disc, and the DVD disc) is a somewhat dull grey/metallic "S" glyph.

The "Man of Steel" Blu-ray disc which contains the actual movie itself, also includes a number of Special Features.

This documentary style feature includes interviews with various actors and crew members, as well as comic book experts to examine the story behind some of the main characters in "Man of Steel". It's quite interesting to hear from the actors themselves regarding what they know and understand about the character they're portraying. I was especially impressed by Amy Adams and Richard Schiff regarding their thoughts on Lois Lane and Emil Hamilton respectively.

All-Out Action - Go inside the intense training regimen that sculpted Henry Cavill into the Man of Steel and Michael Shannon and Antje Traue into his Kryptonian nemeses. Includes interviews with cast and crew.

I was really impressed with just how much hard training and thought went into making "Man of Steel" from the action point of view. The depth of dedication required by the cast, especially Henry Cavill, not only to get into shape and endure the months of what looks like excruciating hard work in the gym, but also the attention to detail in turning fight sequence between super-powered being into a reality, is quite amazing. Seeing the green screen work, the wire work, under water requirements, and over all physical aspects of what went into making these scenes possible is quite eye-opening. Until I watched this I didn't realize just how much of what we saw was actually physical real-life stunt work. The way the production crew and special effects crew are able to meld live-action with computer graphics is nothing short of amazing.

While Dylan's interviewing style needs some work, this featurette focuses on the background information and attention to detail Zack Snyder and his crew put into making Krypton a real place with real people, animals, history, language and culture. He does ask some interesting questions and it's quite interesting to see the computer models for the space ships and see how much reverence was given to really fleshing out the world of Krypton.

Superman 75th Anniversary Animated Short - Zack Snyder and Bruce Timm's 2-minute animated short paying tribute to Superman's 75 year history is included in the Special Features. We've reviewed it on this website in detail, but it's nice to see and hear it in full HD on your TV screen. Well worth watching again.

I'm not sure if it's just on the Australian/New Zealand release, but the final item on the Special Features section of this disc is called "New Zealand: Home of Middle-earth", and, while not Superman related whatsoever, takes us through the real-life locations where filming for "The Hobbit" took place. New Zealand looks amazing!

Journey of Discovery: Creating "Man of Steel" - This immersive feature-length experience allows you to watch the movie with director Zack Snyder and stars Henry Cavill, Amy Adams, Diane Lane and others as they share the incredible journey to re-imagine Superman.

This is easily the highlight of the entire collection. It's an amazing insight into the making of the movie. But better than your standard "Making of" featurette, 'Journey of Discovery: Creating "Man of Steel"' actually takes you through the movie, stopping every now and then to give you an insight into something Zack Snyder, the producers, creative people or actors want you to know about. It's long, longer than the movie itself, but it's well worth it.

The screen often splits into three, sometimes four panels, to show you behind-the-scenes elements of the particular part of the film you're currently watching. You get to see pre-viz material, green screen work, computer models, artists impressions, while listening to an anecdote or explanation about how they filmed this part of the movie, or why a particular thing happened the way it did.

This Special Feature is worth the purchase price alone. Can't praise it highly enough. Very impressive. Like the movie itself, you'd easily have to watch it a couple of times to be able to catch everything they show you.

Planet Krypton - The world's first exploration of Krypton and its lost society.

Some of the material in this featurette will be familiar to fans, who may have seen it released online by way of infographics, videos and the LearnAboutKrypton.com website, but nevertheless it's still fascinating. The creation of the Kryptonian language alone had me amazed at the depth involved in creating the world of Krypton.

I don't think we've seen a more detailed examination of Krypton and its people before. After watching this you really feel like this planet could have existed.

The DVD disc in this collection is really just a bonus back up. It contains the movie, the Superman 75th Anniversary Animated Short and the previously mentioned "New Zealand: Home of Middle-earth" featurette and not much more. 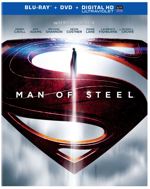 Final Rating: 4 out of 5 - It falls short of a 5 out of 5 rating simply because I would have liked to have seen some deleted scenes included in the collection. We do get to see some of that footage in the behind-the-scenes aspects of the material present in this collection (like Clark Kent carrying his bike up the steps outside the Daily Planet building), but we know they shot a whole scene where the Kents take a crying baby Clark to see a doctor, and decided not to include that in the final cut, but it would have been nice to have seen that as a bonus item in this collection.

As a complete package, the "Man of Steel" Blu-ray/DVD/UltraViolet Combo Pack is a must-have for any Superman fan. It's well worth buying, with hours of enjoyment, both in re-watching the film and in the Special Features supplied on both Blu-ray discs.