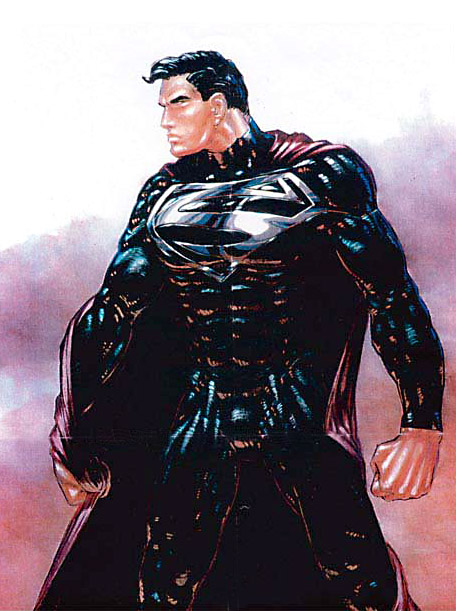 In exploring what could have been for Superman Returns, or thankfully has not been, we secured a copy of the JJ Abrams edition of the working script for the film.

I had heard what it entailed, and I read the script knowing, but reading through, it didn't take away any of the horrors contained therein. Reading this, I'm truly grateful we got the movie we got.

The movie concerns a Krypton that never blew up, and interplanetary civil war with a Zod-like father and son combo that aren't really Zod, fighting with Jor-El. Only it's Jor-El's brother, Kata-Zor, playing Hitler on Krypton, and the son, Ty-Zor, sent to Earth to find and destroy Kal-El.

Of interesting note is the fact that Kata-Zor and Jor-El, despite having differing houses, still claim to be brothers. Not that I'd accuse the writers of not knowing their source material, because this script makes it abundantly clear that such an assumption is a foregone conclusion.

The movie opens with a spectacular "whip-kick" fight in mid-air between Superman and Ty-Zor, then flashes back to tell the story. We never learn why, but apparently all Kryptonians are endowed with incredible martial arts style skills and wield blastaffs. Jor-El is characterized, in a fight, with, "His martial arts skills are magnificent."

Fightin' Jor-El, fightin' all around the world! Jor-El, gettin' in fights!

On Krypton, the Krypton that never explodes, Jor-El plays the good king, only to be taken and held prisoner by Kata-Zor. Lara goes into hiding before eventually being killed in front of Jor-El decades later. There's no indication the planet suffers any kind of upheaval or is near death. The reason Kal is sent to Earth is merely to avoid being killed by Kata-Zor. Superman is apparently, not at all like Anakin Skywalker (he said cynically) the subject of a prophesy that he will bring justice to Krypton.

Perhaps the closest to Superman this movie comes is Clark's youth, which centers on Clark Kent being an insecure kid who's taught to suppress his powers as a way to cope with the fact that he could hurt the people around him. It includes Clark arriving, sneezing, and then the dual meaning stylized, horrible dialogue:

Martha: "Bless you! (A beat. Meaningful) Bless you!"

It cuts to Clark throwing a chair through the house while chasing a ball of yarn, and proceeds to allude to the fact that his poop smells much worse than human poop. Yeah. Super-poop. I guess I could dig that, actually, were it parody.

Clark cries, shattering all the windows in the house, but apparently not Martha's eardrums. Clark plays catch with his father at the age of 3 (early learner, apparently), and throws the ball into space, one of the many repeated themes that actually made it into Superman Returns.

He gets in trouble when he uses x-ray vision to look through Loretta Lang's dress and sees she's not wearing panties. Lana's mom is apparently...well, you can guess.

Clark and Lana share a decent scene, where she points out how weird he is. It's characterizing for Clark, not much for Lana.

It then goes to a scene where Ma Kent is nearly raped (no kidding) by a landlord who wants to exchange sex for rent. He tries to force himself onto her, so Clark beats him nearly to death. He gets up, calling the kid a monster, and runs away. I guess he just keeps Clark's powers secret to be nice, you know, being a rapist and all.

Clark uses his powers to sneak a peek into his Christmas presents. This after the guy who can see through them rattles them and shakes them (no kidding).

In the process, he finds his future Superman suit, which was packaged with him in a vacuum sealed container. When he opens it, the suit stands on its own, and when he touches it, it sucks itself onto his body, Venom style.

Clark's parents let him in on the secret...he's not from Earth. Clark is baffled, and almost starts to cry about this. This after he possesses extraordinary powers... one of them apparently not being deduction.

We then cut to CIA agent Lex Luthor, who is not bald, and who is a lowly lackey working in the CIA X-Files style division, exploring alien threats. He finds one planted by Lois Lane, made of turkey and tomato sauce. Once on the site, he eats a piece of the alien to show it as a hoax, and in turn Lois produces an expose on him.

Suddenly, once one article about a covert alien hunting government organization is published, they go public and admit that they have a spacecraft, just as the U.S. government always does when it's hiding something and someone finds out.

Jimmy Olsen appears, popping such cunning phrases as "You know what I'm saying?" in one of his few brief scenes. Perry meets Clark Kent, and criticizes his handshake by pointing out that it's weaker than Jimmy's, and Jimmy is GAY.

Ah yes. Because lord knows, those gays are all pansies.

Clark Kent comes to the Daily Planet to find Lois, not because he's interested in being a reporter, as he meets her at a frat party in college and she saves him from a big jock. Thusly he's not a reporter out of personal drive or ambition or intelligence, but rather to chase yon skirt.

And hey, here's a comic gemmie from the "Jimmy is gay" scene (warning, cursing ahead). One of the comedic beats is Jimmy calling Perry a total asshole! Family fun for everyone!

Simultaneously, Pa Kent has a heart attack from hearing that his son put his persona forward, and Clark feels responsible for his father's death. Which he kind of is. Which sucks. A lot. Even worse, because of it he decides not to be Supes anymore, a decision he later recants without any real thought or time given to it.

In the next scene, I kid you not again, we enter Kata-Zor surrounded by "two scantily clad Kryptonian females," smoking a Kryptonian bong and playing 3-D chess ripped straight out of Star Trek. Only with a different name.

If anything, this script is good for a solid laugh.

Luthor is fired for suggesting that Superman is a threat. It's one of Luthor's traditional motivations, and that's admirable. What sucks is that he's not portrayed as a genius, he hates Superman for a petty job-loss, and it's obvious he has no motivation to believe Superman a threat. Until the end. But we'll get to that.

They have the "Superman listens" scene from Superman Returns, but it takes place on the Andes mountain, and leads to a few new rescues, including an homage with stopping a man beating his wife, and a neat sounding lava and freeze breath scene.

Superman and Lois meet and fly over Metropolis, per "Can You Read My Mind?" but a little more romantic than Singer's in ways. It's cheesy, though, so it's not better in total. Lois loves Superman, and not Clark, so it's a bit beyond my bounds of the understanding of the character, given that I much prefer a world where the choice is Clark first, and then Superman as the fantasy...

With Bryan Singer, there were few original ideas in the script, but a great modern take on a classic, with a classic feel.

With JJ, there are a TON of new, creative ideas coupled with a bunch of arbitrary stereotypes with no classic flair whatsoever beyond the Lois and Clark and Clark youth scenes, which all have multiple issues.

Ty-Zor has a massive fight around monuments (per summer movie cliché) with Superman in a giant metal battlesuit, despite having all of Superman's powers. Why, we're never really quite sure, but it lasts for a long time.

They later destroy the pyramids to get Superman's attention, and Notre Dame.

It ultimately leads to a confrontation where Lois is tied up in a tank full of water, drowning, and to get to her, Superman has to pass Kryptonite, a new element at this point. He promptly does, it weakens him near to death, and then, his powers gone, he somehow manages to punch the window open and save Lois (Singer shares this problem in not "getting" Kryptonite, but JJ REALLY screws it up).

Superman promptly dies. HOW the Kryptonite got near Lois when Ty-Zor was the one setting the trap is never explained, really.

Superman is buried, and Lois gives a memorial. Jor-El somewhere MYSTICALLY knows his son has died (no kidding thrice) and thusly commits suicide.

In the afterlife, he tells his son he's destined to stop Kata-Zor, and therefore will be returned to life (?) and fulfill the prophecy.

Superman returns to his body, which is in the coffin beaten, battered, and still in his suit (guess they didn't clean him up or anything). The suit repairs itself, Superman bursts out of the ground less than five minutes later in the script, and goes to the UN, where he says:

Superman arranges all of the countries of the Earth and tells them to take Kryptonite and make a massive arsenal out of it, which they do, putting Kryptonite into warheads, bullets, and explosives.

Somehow, we're supposed to believe that Superman will still be a powerful figure after this, when Kryptonite bullets and missiles are all over the place. But whatever, at this point, you don't care.

Superman beats the villains with the missiles, and decides to leave Earth for Krypton to stop Kata-Zor, per the prophecy, leaving Earth all ruined up.

Lex Luthor finds him, and reveals he isn't really a CIA Agent...but a KRYPTONIAN! They martial-arts battle in the sky, with Luthor being the "sensei" in the words of the script, and Superman getting schooled, until Lois hits Lex with kryptonite and he withers. Guess Luthor didn't see that coming somehow.

It ends with Superman returning to Krypton. Sadly, it appears to be the first part of a trilogy.

All in all, it wasn't nothing. It was creative in a lot of ways, but in that kind of way that creativity is when you're in middle school and you write up your own Superman story. All in all, I'd have to give the affair a 3 of 10, which is kind of nice.