Jack O'Halloran is best known to Superman fans as Non, the voice-less Kryptonian villain in "Superman: The Movie" and "Superman II".

The Superman Homepage would like to thank Jack for agreeing to do this interview, and for fitting it into his busy schedule. 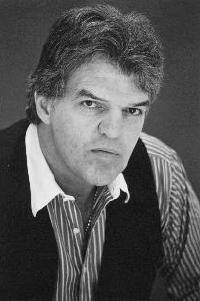 Q: Can you please tell us a little about yourself and what you're now doing?

Jack: Well to start with I was an athelete first Pro Football and then Pro Boxing that all ended in 1974 and 1975. I began my film career with "Farewell My Lovely" and I worked non-stop until 1980 when I suffered a broken back on "Superman II". Then I did a few movies in the eighties and early nineties. Then I was also writing which I do a lot of now. I also own a few software banking pieces and deal with a few internet companies. I am involved in a huge project at the moment. Plus a very good project that will put me back in the film business in a big way which will be announced soon.

Q: How did you go about becoming an actor? What was your first big break into the industry?

Jack: Well I wasn't your usual film actor case study. When I was boxing I was approched to do a few movies. I guess it started in Boston when I meet Steve McQueen while he was shooting "The Thomas Crown Affair". And he offered me a job and I said no which he couldn't believe, so it became a thing for him to get me in the movies. But I always said no to him. Then a few years later I was offered "The Great White Hope" film starring James Earl Jones but I just knocked out the number 1 contender for the Heavyweight championship, a fighter named Manuel Ramos in LosAngeles. And the producers couldn't believe I said no again. That was 1968 then in 1974 they came to me and asked me to do "Farewell My Lovely" with Robert Mitchum and I said yes and I was off to the races.

Jack: Yes, depending on what they were looking to do. Acting is very difficult to break into but very rewarding. And there are many facits of the industry to enter.

Q: How did the role of Non come about for you? Who contacted you? Did you have to audition for the role?

Jack: I was doing a film called "March or Die" with a crew from England and Gene Hackman. And I had turned down the Bond film "A Spy Who Loved Me". I was living in London and I talked to Richard Donner who ask if I would be interested. I liked the character and I chose not to speak. I thought it would be good to do a role using acting facial expressions and someone had to relate to the children, so I did it. Also I liked the idea of working with Donner and Brando.

Q: Were you a Superman fan before acting in the Superman movies? Have you ever read Superman comic books?

Jack: It would be fair to say I was and yes I read the comic books as a child growing up.

Q: Did you have to do any research into the Superman mythos for your role as Non?

Q: What was it like working on the Superman movies? How well did you get along with the other actors, especially Christopher Reeve, Marlon Brando, Margot Kidder, Gene Hackman, Sarah Douglas and Terrance Stamp?

Jack: We had a lot of fun except the Salkinds were @$$holes and caused all the commotion that their was on the film. I got on with everyone in the cast, like I said there were a lot of laughs. But also a lot of hard work. Richard Donner was a treat to work with, I had a lot of respect for Richard.

Q: What was Richard Donner like to work with compared to Richard Lester?

Jack: It was great to work with Donner. Richard Lester was as big an @$$hole as the Salkinds.

Q: There are stories that Richard Donner filmed much of "Superman II" while filming the first Superman movie, and that it was later scrapped and the second film made. I have heard that the scrapped film exists but has never been shown. Have you ever seen any of those scenes? If so, can you tell us about the scenes that were in that film?

Jack: Richard Donner shot eighty percent of "Superman II", in fact we were so caught up in II they had to stop to finish one because of contracts on delivery of Superman I. The movie "Superman II" WOULD HAVE BEEN 1000 TIMES BETTER HAD THEY LET DONNER FINISH WHAT HE STARTED. And yes, I saw all the scenes, I worked in a lot of them, it was a great movie. What no one will tell you is that it was Donner's version that got Warner Bros excited about the film. Then the Salkinds f#%*ed everyone, Brando, Donner, Hackman... it was pathetic what they got away with. Trust me "Superman II" would have been a classic of classics had Richard Donner finished that movie.

Q: Is "Superman II" substantially different from the original Donner version? I have heard that it was not, and that many of Donner's scenes were basically reshot by Richard Lester. Do you have any insight as to why the Salkinds wanted a different version?

Jack: Yes your correct, the scenes were just reshot, but understand the look was different. Donner had a magic touch and was a great Director, Lester was a Television hack who did it as cheap as he could. Anyone ever tell you the story about when they shot the Eiffel Tower scenes in Paris? They took the Superman 50 million dollar project into Paris as a cheap western production because it was cheaper to shoot in the pouring rain rather than wait for a dry day... just to save money. Just look at the scenes when Margot was talking to the French policeman trying to sneak into the tower elevator. The windscreen wipers on the cars are working away and the drops were hitting the shirt of the police officer... it was horrendous what Lester did... all in the name of money.

Q: Could you please tell us about the training you did for the aerial fight scene over Metropolis? I always assumed that this scene was done in front of a blue-screen. But how was the scene choreographed? Did you have to practice your movements?

Jack: I was a good athelete and always in shape so I didn't have a problem. The problem was in the harness we wore and I straightened that out... We brought the fellow from America who made the harnesses for the "King Kong" production and they worked a treat. It was either those or we all walked. We worked very hard doing the flying scenes and in fact I was doing A FLY SCENE WHEN I BROKE MY BACK and they never accepted the blame.

Q: Did you make the little frustrated sounds Non makes when he tries to burn things with his heat vision? Or was that later dubbed in by someone else?

Jack: I did them myself.

Q: How did it feel to be the "dumb one"? Did the fact that your character had no spoken lines affect they way you approached this role?

Jack: No, it was my choice. I wanted it that way. I wanted to relate to the children, like when a child takes their first step or does something good they get a reward, like the burning of the snake... that was all my idea.

Q: What do fans of the Superman movies generally say to you when they meet you? How do they commonly react?

Jack: "My God he can speak!" A lot of people knew me from "Farewell My Lovely" which was a big success, and of course "King Kong".

Q: What other movies have you worked on since the Superman movies?

Jack: "The Baltimore Bullet", "Dragnet", "Hero and the Terror" and "The Flintstones".

Q: Would you like to see Superman on the big screen in another Superman movie?

Jack: Very much so. I think the public were cheated... they should have done ten films like they originally talked about.

Jack: I think it is very good.

Jack: Not any more.

Jack: To learn to be honest with yourself and find some inner peace.

Jack: I wish my friend Robert Mitchum were still alive so I could sit next to him.

Jack: We'll leave that one alone.

Jack: On my family.

Once again I would publicly like to thank Jack O'Halloran for taking the time out to answer these questions, and for agreeing to do the interview.

This interview is Copyright © 2001 by Steven Younis. It is not to be reproduced in part or as a whole without the express permission of the author.