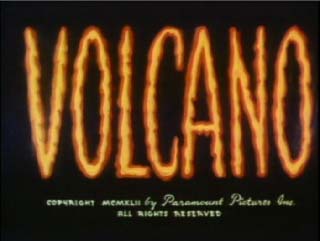 In this cartoon Superman ditches jumping for flying and saves an island from a literal game of "the floor is lava."

Now on to the review!

Rating - 3 (out of 5): This was a pretty straightforward installment of this series. It has everything you need for this type of storytelling and implements it in an efficient way. A big notable change in our opening intro is that the line "able to leap tall buildings in a single bound" is replaced with "able to soar higher than any plane."

This officially confirms Superman's flying abilities for the first time in this series, and subsequent media would follow suit. These days flight is one of the signature staples of Superman and the superhero genre, and this cartoon firmly establishes it.

Opening narration establishes our setting as Mt. Monokoa, a volcano which threatens the city that lies beneath it. The government is sending a team of engineers to safely enact a controlled detonation to divert the lava flow safely and to prevent a catastrophic eruption. Lois and Clark are sent to cover the story.

This episode establishes a competitive rivalry between Lois and Clark that had only been hinted at earlier in the series. As Clark is discussing the assignment with Perry White, Lois steals his press pass. When the two get to the volcano, Clark is not allowed on site.

I enjoyed this little piece of playful tension between these two. Its tough to try to put a lot of story in such a short episode, but this added a quick bit of levity and fun to the cartoon. The active nature of the volcano has caused terrible tremors throughout the island.

The earthquakes are a sign of the eruption that's soon to come. As Lois is covering the story, the eruption begins. Many machines designed to activate the controlled detonation are destroyed and a key power cable to one of the machines was disconnected.

As the lava flows from the top of the volcano, Lois tries to make a daring escape. Her only chance is to climb across a cable car line down the mountain. If she falls, it means certain doom for the intrepid young reporter.

Superman flies to the scene attempting to protect the city below in any way he can. He notices hanging from the cable line, and rescues her just in the nick of time. Superman also diverts lava from reaching the city below by slinging the cable car into the lava after rescuing Lois.

It is soon after this that I have my only real gripe with this cartoon. Superman saves the day by reconnecting the damaged course cord to the power by using himself as a conduit. If that sounds familiar it is the same way that Superman repaired the magnetic telescope in the earlier installment of this series aptly named "The Magnetic Telescope."

I wonder if they had writer's block or were just plain lazy? Were these cartoons popular enough already that Fleischer Studios could already start resting on their laurels? The world may never know the answer to those questions, dear reader, but it's fun to wonder anyway.

The day is saved, Lois gets her headline, and she and Clark begin to head home. Lois playfully gives Clark a hard time about losing his press pass as the cartoon fades to black.

This cartoon stands out to me for two reasons. One is the official confirmation that Superman can fly, and the other is the fun tension between Lois and Clark. All in all it was an enjoyable installment of the series.


Back to the "Fleischer Superman Cartoon Reviews" Contents page.